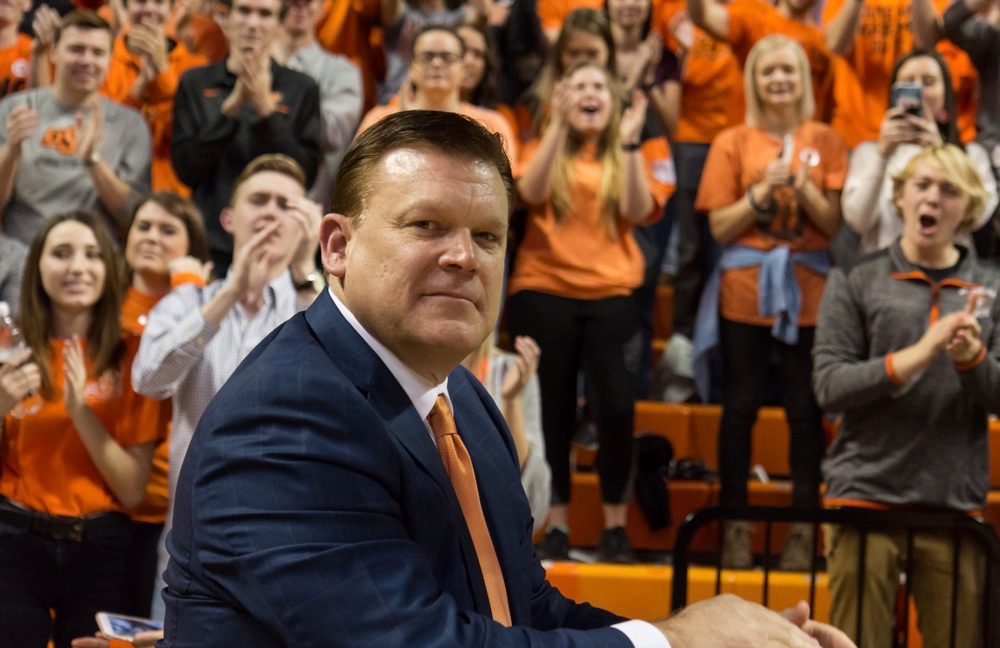 I’m just sitting there after a fun morning with the kids, watching some golf and booking a flight when boom, Carson drops a message into our Slack chat: Illinois hired Underwood!!!

I thought he was kidding. Like, I legitimately thought he was just messing with us because we hadn’t really been active on Slack all day — a NCAA Tournament hangover, I suppose.

Then I jumped on Twitter … and I haven’t come up for air since.

I was just telling Mrs. Pistols this morning, “We’ve got five months until football. I’m not real sure what we’re going to write about. I don’t even know if the site is going to make any money.”

The #ContentGods always deliver, don’t they?

Five thoughts on a batty day in Stillwater, Oklahoma.

I wrote about this more extensively here, but Holder sort of got raked over the coals on Saturday for not doing what he did for Travis Ford: Overpaying after a good (not great) first season that ended with a crazy NCAA Tournament game.

Underwood got six years and over $18 million from Illinois (over $3 million a year). That’s ludicrous. These numbers are from 2016, but that would have been top 10 money nationally! It will still probably end up being in the top 20 next season.

Underwood got Top 10 money. I don't think that's what it took to keep him, but Illinois paid the man huge money. #okstate

Holder made a #businessdecision, and I think it’s one I’m fine with. Brad Underwood is not John Wooden. He was a fun, exciting coach that rocked in Stillwater for a year, but there are others out there. It’s hard to pay that $3 million Underwood said he wanted after Year 1 with Ford still in the rearview looking like this. Holder’s failure, I suppose, was not locking things down earlier in the year (although I’m not real sure of what that timeline would have looked like). His other failure is overestimating Ford’s ability eight years ago. If you want to blame him for something, it should be that. Underwood, on the other hand, was an amazing fit, and you sometimes have to pay a premium for amazing fits.

Underwood called the Illinois hire perfect timing, and in so many ways (Holder coming off the Ford contract, Underwood coming off a revitalization and Illinois needing a coach badly) it was.

OSU has to decide what parameters it is using to pay head coaches. With Travis Ford, it used his trajectory and gave him 10 years and over $20 million. It was banking on a future it thought it could see.

With Underwood, OSU swung the other way. It paid him based on a performance in the recent past that was all right (20-13 and 9-9 are Ford-like numbers in Year 1) but nothing to call the Basketball Hall of Fame over.

The real interesting part now is that OSU has to figure out what its floor and ceiling are for a head basketball coach’s salary. It’s hard to imagine a coach (that you could reasonably get) coming in next year and besting what Underwood did (especially when it comes to ticket sales) so have you set the standard that you’re only going to pay $1 million to anyone who comes in Year 1 and work from there? If so …

First, coaches are going to be more reticent to take OSU up on this offer in the future. Why not just hold out and go somewhere that will pay better money from the start?

Second, this is going to continue to be a stepping-stone job even if you do get guys. If you’re saying that coaches in Stillwater have to earn their pay based on past performance, you’re not going to keep anybody that’s any good for any amount of time.

You’ve set the table to make it super easy to hire Gottlieb now.

This is sort of a perfect storm for No. 44. If he doesn’t get hired now, then it will definitively never happen.

Look, I love covering golf for CBS. Love it. But if Golf Channel calls and says, “We’ll triple your salary and tack another year onto it,” then it’s goodbye, friends for me and I’ve got the moving van halfway to Florida before my wife even knows what happened.

I could do without the mad lib of “(new school) is elite and I’ve always loved (town). It’s one of the few jobs in the country that could have taken me away from (former job)” routine, but I don’t fault him.

The only odd thing to me is that it didn’t really feel like OSU had a chance to match Illinois’ offer (if you believe Berry Tramel’s sources). Maybe working for Holder is as miserable as everyone makes it sound.

While we’re here — and I know this is totally revisionist history — as Underwood everything we thought he was as a coach? Look, I was in on him. I thought he was going to rock in Stillwater for a long time. But his defense was No. 156 in the country in efficiency. OSU lost 13 games. They were not better or worse (statistically) than Year 1 with Ford.

I guess what I’m saying here is that I understand why a person would not believe Underwood is worth $3 million a year and that him leaving, despite what everyone seems to think, is not really the end of the world.

Berry Tramel said as much.

Travis Ford, fired a year ago after eight seasons as OSU’s coach, was making $2.4 million a year, the residual of a 10-year contract he signed after his first season, in which the Cowboys made the NCAA Tournament and beat Tennessee in a first-round game.

Underwood’s case: Holder had established the value of an OSU basketball coach, with the contract he gave Ford. [NewsOK]

Two things Gundy must be thinking:

Gundy has already sent a video text to Holder of him lightning the alleged contract extension sitting on his desk on fire and writing the following on a new one.

Somebody said this on Twitter (I’m sorry I have no clue who it was), but I have to think Evans will be more impacted by what he’s told at the NBA Draft Combine (or whatever it’s called) than about who the head coach is at OSU. I never got the feeling that Evans was “an Underwood guy” or a Ford guy (or an anybody guy) more than he was just a baller riding for whoever was sitting in the seat on the far left of OSU’s bench.

For the record: I still think he’s gone and have thought so for a while.

I touched on this earlier, but I’m seeing names like Buzz Williams and that caliber of coach being thrown around. OK. Here is the problem with that.

Those are your only two options here. Holder has handcuffed himself to a price range and then said Underwood, a man he thought enough of to hire essentially before the 2016 NCAA Tournament ended, is not actually worthy of making big boy money. And he’s actually not based on his past performance, but at some point you have to bet on the future. And Underwood seemed like a damn good wager.

So is Buzz Williams (or someone like him) really that much more proven than Underwood and thus worth $3+ million a year in Holder’s eyes? Or is OSU just not going to pay anyone who hasn’t achieved a massive amount of success specifically in Stillwater?

I think the reality here is that somebody every year is going to be willing to pony up big money to good, underpaid coaches. So either OSU is going to have to pay that money or it is going to be perpetually stuck with a bad program or a turnstile of coaches.

Gottlieb might be the exception here … he could feasibly grow as the program grows and maintain a salary near the bottom of the Big 12. Then when the time is right, if achieves multiple years of success, Holder could pay him adequately. That works in theory with homegrown guys, but as Holder has been trying to prove with Gundy for the past seven years, it doesn’t always go how you want it to.

It still doesn’t feel real, does it? I remember writing this last year when Ford got fired (exactly one year ago to today) and Underwood was hired three days later. It was like lightning. It all seemed so crazy and radical, and that was when we were expecting it to happen.

So today was a sandstorm of opinions, numbers and incredible quotes. Usually days like today expand into weeks or even months of sports coverage. Today was like an event put under extreme pressure that resulted in unadulterated fission. It was an absolute explosion of news.

We haven’t really had time to properly digest it all, but hopefully coherent thoughts were formed, well-reasoned opinions were written and tweets were nuanced. I have no idea if any of these things happened, but I am glad for the day to finally come to an end.

“And, oh, by the way, I ain’t leaving. What people saw this year is only a fraction of what that place can be.”