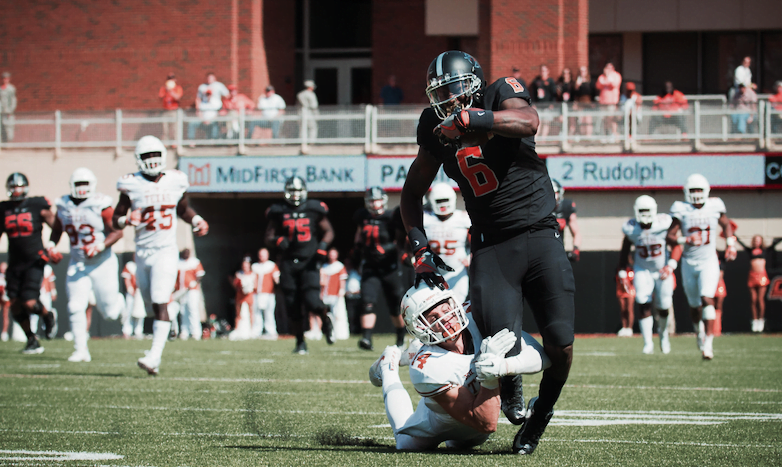 What a game it was for Oklahoma State. After the outside noise the entire week surrounding the football program, the Cowboys came to play early and looked like they were the team who was coming off a bye week after a disappointing loss. Mike Gundy had his squad ready to roll on Saturday and they looked

Hill’s breakout party last weekend against Baylor was overshadowed by two key fumbles in Waco. But on Saturday it was more of the same performance, minus the turnovers. He was the bell cow of the game with 22 carries for a season high 139 yards, zero fumbles and a touchdown. More importantly, despite the turnovers late last week, Mike Gundy went to him with the game (somewhat) on the line. As the Pokes drained clock late, Hill got the carries and made sure he had two hands on the ball. He’s the real deal, and joins an elite group of freshman tailbacks with multiple 100-yd games:

2. We need to determine what targeting is

Out of respect for James Washington, I won’t be posting the video. But to recap: After taking a screen pass on the left side of the field and getting twirled around by a Texas defender, one Longhorn came in and lead with the crown of his helmet on James Washington. Going down on the play, Washington was rendered unconscious according to multiple reports. It wasn’t an obviously malicious hit, but nonetheless, it seemed to be a pretty clear targeting.

By definition, leading with the crown of the helmet is considered targeting, regardless of intent (which can’t be judged.)

For some reason, the play was never even reviewed as targeting. He missed the rest of the game.

The Big 12 replay booth has the power to review that hit for potential targeting, per a new 2016 rule, but chose not to. Why?

I’m all for big, clean hits. To be honest, I think the targeting rule has been a benefit to Division I football. But the fact that the option is available to challenge, and there was no action taken by the Big 12 replay booth is baffling. The guy was knocked out COLD — what’s it take for the booth’s employees to trigger them and think “Hmmmm, maybe let’s take a look at that.”?

Seems like another major miss for the Big 12 replay booth. The good news, however, is that Washington was held out as a precaution and is expected to practice tomorrow according to Mike Gundy.

Where to begin? I’m not sure it’s a knock on how bad Texas special teams was, but rather a testament to how phenomenal OSU was. Vincent Taylor himself had THREE blocked PAT’s, one that was returned back for a safety and was just incredibly well done:

It got to the point where Texas just said “Screw it, we’ll just go for two rather than risk getting blocked PAT’s that can go for safeties.”

4. Injuries were crucial to the outcome on both sides

It always sucks watching a game when the top players go out, regardless of who you cheer for. Texas’ leading rusher, Chris Warren, had 108 yards rushing at the half but didn’t return to the game in the second half after sustaining an injury. Same goes for OSU linebacker Jordan Burton, who didn’t play the second half. Oklahoma State also lost James Washington for the remainder of the game in the second half after sustaining an injury, and Texas tailback D’Onta Foreman sustained what appeared to be an abdominal injury that put him out for a good part of the fourth quarter. For OSU, it didn’t appear to be game-changing. And who knows if Texas brings back Warren in the second half whether it even makes a difference, but Texas running a true freshman tailback in the fourth quarter probably wasn’t their game plan going in.

Jordan Burton and James Washington are two incredibly key cogs for OSU, one an All Big 12 performer from last year and one who seems destined for all-american status and Biletnikoff consideration. It’s extremely unfortunate for OSU and will be a situation to keep an eye on this week.

5. There isn’t a talent gap between the two teams

Oklahoma State is known to be a team that gets the second and third tier recruits passed on by Texas, OU, and other Texas area teams. And if you look at star rankings, Texas is loaded. But it’s more than getting dudes. It’s about getting dudes to be in a good position to win. And even when Texas seemed to be rolling with both sides of the line controlling the game, Oklahoma State hung tough and was just flat out better. They played a good, clean game with no turnovers, no fumbles, and won by a landslide in the special teams. That, coupled with Jordan Sterns interception near their own goal line, is a recipe for success for a win.

6. Glenn won the second half

Defensive coordinator Glenn Spencer jumped from the sideline to the booth this week, likely as a change that was made following the loss last weekend where OSU’s defense was gashed for big play after big play.

It wasn’t pretty, particularly when the score at the half was 37-25. But Glenn did wizard magic in the second half, only allowing 6 points in the second half which came in the third quarter. They showed more blitzes and had consistent pressure on freshman Shane Buechele, and it paid off in a big way. I’m all for Glenn in the box.

Glenn Spencer on being in the booth: "On that last fourth down stop I might have busted that window. It's OK, I'll pay for it." #okstate

KP hit on this last week regarding OSU’s identity as a team being somewhat unknown. I think we saw a little of that identity develop on Saturday. OSU is far from a ground-and-pound Big 10 team, but for the first time in several years they seem to truly have found a balance in the offense. They’re running between the tackles and getting positive yards, and they’ve been excellent running outside zone getting Justice Hill in space. When Gundy talks about getting a “hat on a hat”, they’re getting that on a consistent basis. When you’re able to mix it up on offense and, more importantly, drain the clock to allow your defense to rest, it strengthens the entire unit. When you can run for 163 yards on Texas, that’s a sure sign of marked improvement up front. They’re getting back to a more balanced attack, and when they’ve gone to Hill he has produced. He’s an electric player who could be one of the most important players to establishing their new identity on the ground.

8. Mason Rudolph was in fine form

Rudolph looks 100% out there and his agility on the field and ability to move within the pocket is a game changer. Not only has Rudolph hit his spin move as his go-to in creating some space to make throws, but OSU seems to trust him enough to run at his leisure without worry. He’s a veteran, and OSU is treating him like such. I’m not a fan of running the J.W. package with Rudolph, but he tucked it down and earned the tough yards when OSU needed him.

9. This could put Texas in danger

We went from week 1 opening win over Notre Dame, where everyone was ready to proclaim that Texas was “back”, to Texas dropping two straight to Cal and now OSU. Texas gave up 392 yards through the air (against a future NFL QB, mind you), and that’s after defensive coordinator Vance Bedford was riding the hot seat better than Les Miles all week. Now, it seems not only is Bedford now on the hot seat, but the head man himself:

I grabbed Texas AD Mike Perrin and asked about Charlie Strong's future. He told me "We need to evaluate what happened here."

We could be a Red River Rivalry game away from a new regime in Austin.

Pretty much everyone considered the sky falling after last week leaving Waco with a loss in a game they should have won. Wins make everything a little more smooth, and that may have something to do with it. But the two problem areas appear to be getting shored up.

Oklahoma State has a running game. They have a quarterback. They have a defensive line, and they have a pretty good secondary when they’re in position. I’m not so sure this isn’t a team that looks primed to compete for a Big 12 title.