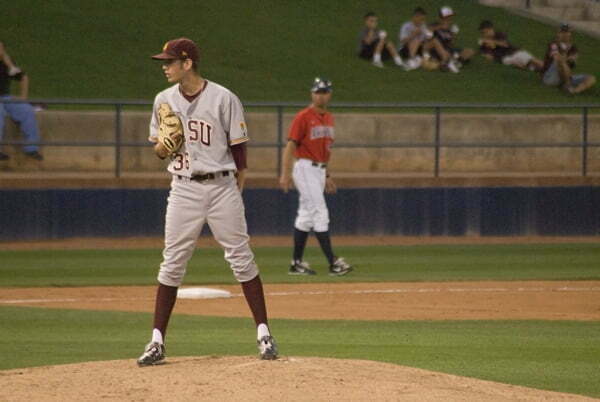 You can read the full story on (and see a picture of) the left-handed Ottoson, who sports a 2-5 record with a gamely 3.17 ERA, by Samantha Vicent here, but if you don’t have an O’Colly subscription I’ve included some of the better quotes below…

There is evidence that he was traveling at a high enough rate of speed to go airborne prior to impact.

Airborne? In Stillwater? Did he drive into a grain elevator?

Ottoson was then transported to the Payne County Jail and given a Breathalyzer test. He had a .19 blood alcohol concentration at the time

.19 is a lot. Like “possibly could have sedated XLK in the middle of the offseason after a couple laps at Carl’s Jr.” a lot.

He reportedly told officers that his baseball coach “was going to kill him”, according to the police report.

Yes, yes he is. And it will be a quiet, possibly whimpering death. Except…well…who’s going to pitch the weekends?

Wade McWhorter, an OSU Athletic Media Relations spokesman, said the baseball department “is in the process of gathering all the facts” about Ottoson’s arrest and “will determine a proper course of action if necessary.”

There is no word yet on whether Ottoson will play in this weekend’s home game series against Texas Tech.

I’m gonna go out on a thin limb and say no.

On the bright side, this is the most exciting that’s happened to the baseball team since that triple play a month and a half ago!