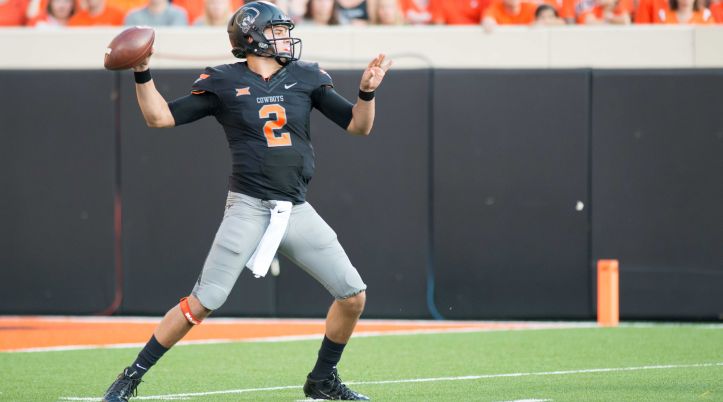 This blog has never been one that has dug super deep into #sources (uniform things aside!) but given the nature of this weekend and how big this game, a Mason Rudolph injury update seems worth getting out there.

Here is everything we know right now.

There have been various social media reports this week suggesting that Mason Rudolph suffered a broken foot after reports surfaced that he was seen in a walking boot and crutches last weekend and earlier this week.

We have confirmed with multiple sources that though the boot and crutches were precautionary and Rudolph did break a bone in his foot. It doesn’t appear to be season-threatening or supremely serious, but it also isn’t nothing. It’s not just a sprained ankle.

It seems as if, given the nature of how Mike Gundy talked about it on Monday, this is a comfort issue more than a “future integrity of the foot of The Franchise” issue. Especially given Gundy’s nature to protect his players and OSU’s more-than-adequate QB2.

Rudolph was seen visibly limping last Saturday to finish the Baylor game, and was able to finish the game playing through pain. Despite this, Bill Haisten reported that Rudolph probably practiced on Wednesday.

It is believed that Oklahoma State quarterback Mason Rudolph, who sustained an apparent foot injury in last week’s loss to Baylor, participated in the Cowboys’ practice Wednesday and is on course to start Saturday in the Bedlam meeting with Oklahoma in Stillwater.

We are very confident Rudolph will start on Saturday, although the foot is obviously something to keep an eye on as OU comes after him all night.