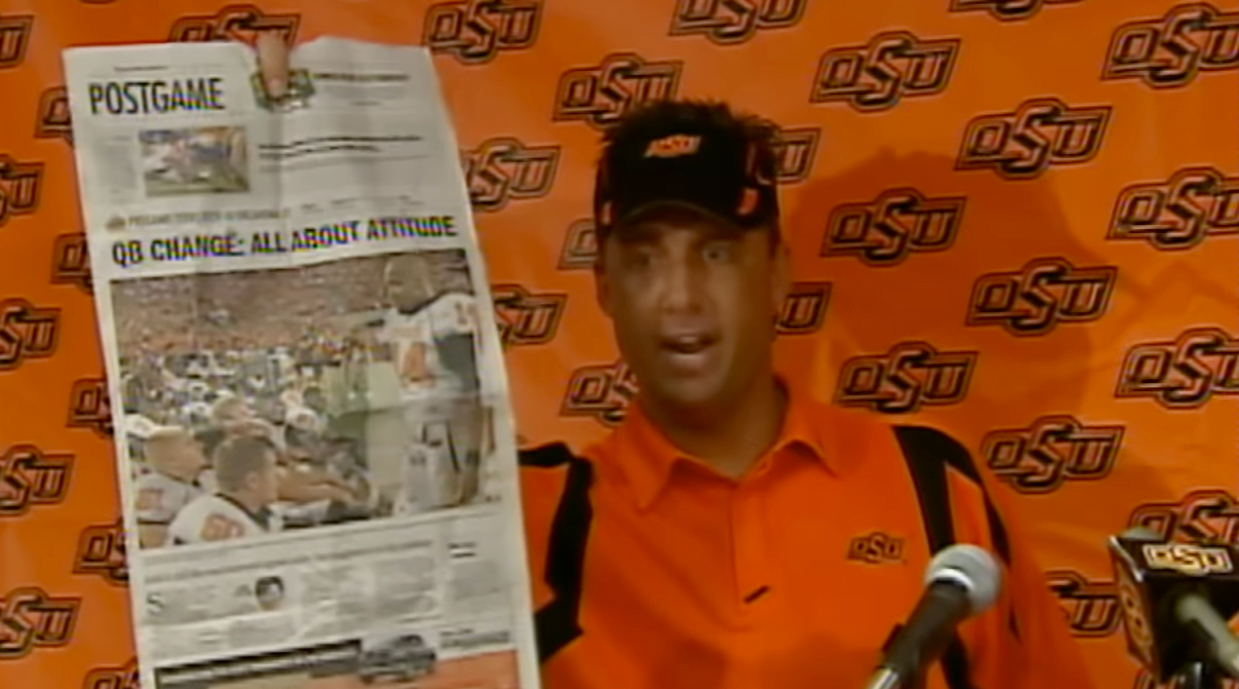 Thirteen years ago today, Mike Gundy’s infamous, “I’m a man, I’m 40!” rant shook the state and swept social media in a way we’d never seen before. For Gundy, who was then 40 years old (if you hadn’t guessed by now!), it was a career-altering moment as he broke through as a young and somewhat-unknown coach into nationally-recognizable as that coach who went bonkers in a press conference.

It was undeniably good for his career. He defended his player, became a household name in the region and subsequently used the fame as a launching pad to reel in some of the best recruits of his career as OSU’s program jumped in a hurry from a second-rate program to much, much more.

Here were the five best moments of The Rant, ranked. Video linked at the bottom.

Will a college football coach ever produce a more quotable and memeable moment in the history of the sport? Chances are zero. He said it with such conviction and with such a serious face that it’s impossible not to cackle a bit on the rewatch. Especially the four words that followed: “I’m not a kid!”

Mike Gundy might have himself a post-coaching career in writing because he sure as heck made sure not to bury the lede with his introduction. He instantly dives in with the lead-in to his rant by saying that, while he disapproves of a newspaper article, he definitely does not read it.

Then the laugh-track line: “This was brought to me by a mother … of children.”

You could tell Gundy was tilting pretty early because he was all over the place with his tone, emphasizing some words in weird spots and deemphasizing other words. Some very I’m Ron Burgundy? vibes here.

“… and has never had a child, that’s had their HEART BROKEN. AND COME HOME … upset. AND HAD TO DEAL WITH THE CHILD. WHEN HE IS UPSET…”

This was “fake news!” before fake news was fake news, right? Gundy called the newspaper fiction, then went on the offensive at the writer and editor who produced the column he so despised.

“THAT’S WHY I DON’T READ THE NEWSPAPER. BECAUSE IT’S GARBAGE. AND THE EDITOR THAT LET IT COME OUT IS GARBAGE! Attacking an amateur athlete … for doing everything right.”

Gundy concluded his, uhm, press conference (!), by saying, “That’s all I’ve got to say. Makes me want to puke!”

No one knew quite how to react but there were a few awkward claps coming from the back applauding the performative nature of the show he’d just put on.