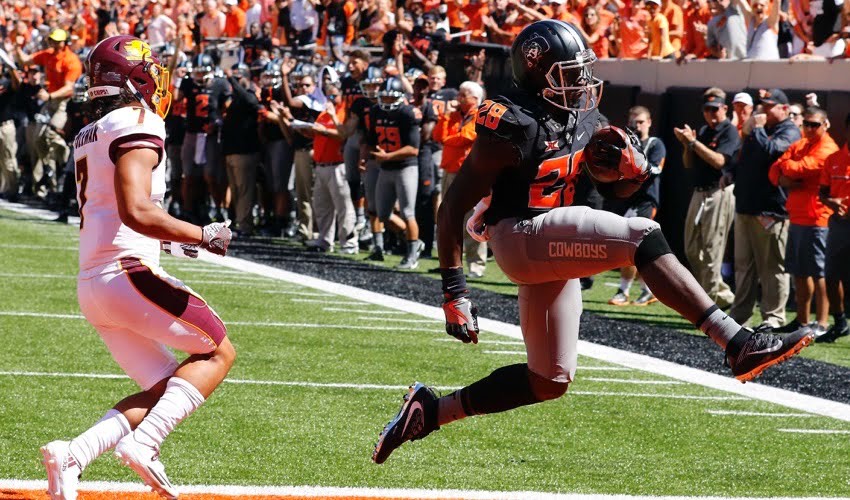 Somehow I’m just getting around to the notebook from yesterday’s game. It will be brief because we’ve written about 39 posts in the last 16 hours, but let’s jump right in to the notes that didn’t make my 10 Thoughts on the game or Six Thoughts about that final play.

• One uniform note I’ve failed to mention yet is Jalen McCleskey’s towel. I love it. It’s straight out of the Hart Lee Dykes uniform playbook!

• Chris Carson on the outside edge is just nothing. There’s nothing there. I like Carson, and I think he has a legitimate slot in this rotation of running backs, but we need to stop running him to the outside.

• I love the big numbers on the front of the jerseys.

• Lenzy Pipkins has one of those burned-on horseshoe tat things on his arms. My question: How bad does that hurt? I wanted to pass out when I got a half-inch tattoo on my wrist. Would I just straight up die if somebody tried to give me the horseshoe brand thing?

• At one point I wrote “pass protection is really good for Rudolph.” Must have been really early in the game.

• Before the rest of the game unfolded, this was a pretty spectacular throw.

We get this for ~25 more games. Whoooo boy. pic.twitter.com/n1xWAun04R

• The turnaround screen play thing to The President is one of my favorite plays. I can’t get enough of it. It’s Yurcich’s version of Lester’s “fake to the fullback and pitch back to the running back going the other way” play.

• OSU has been playing down to its competition a lot over the last two and a half seasons. That’s really disappointing as a fan. On Saturday it really caught up to them (obviously).

• Here is the case for “yo, J.W. might have been better than we actually thought” crowd.

• We going to talk about the 30 yards of penalties Trey Carter racked up? That was pretty terrible.

• One thing I was thinking about during the game on Saturday: It’s harder to be good when you’re expected to be good. Last team was innocent and fun and pretty good. This one was expected to win a Big 12 title (or at least compete for one). That’s a tough level to maintain.

• I thought Rudolph’s underthrows on deep balls were more concerning than the overthrows on short routes.

• Matt Ammendola’s 53-yarder was one of the longest field goals in school history. The longest is 56 yards. Ben Grogan’s longest is 47 yards.

Oklahoma State's offense reminds an old-timer of Loyola Marymount basketball back in the day.

• Not exactly what I was going for on a Saturday against CMU, but I guess I’ll take it.

Most traffic in PFB history:

• CMU seemed scared to go over the middle for much of the game — the problem with that is you have to be absolutely perfect to string together long drives. Which they were on enough drives to beat the No. 22 team in the country.

• One thing I haven’t heard a lot about is that OSU got bailed out on a lot of pass interferences. We could have realistically lost by two touchdowns.

• I like the pastel Nike hats worn by GAs on the sidelines. I’d wear one of those.

When you realize you're getting Chick Fil A for the post game meal. https://t.co/I5khUQ3F5Q