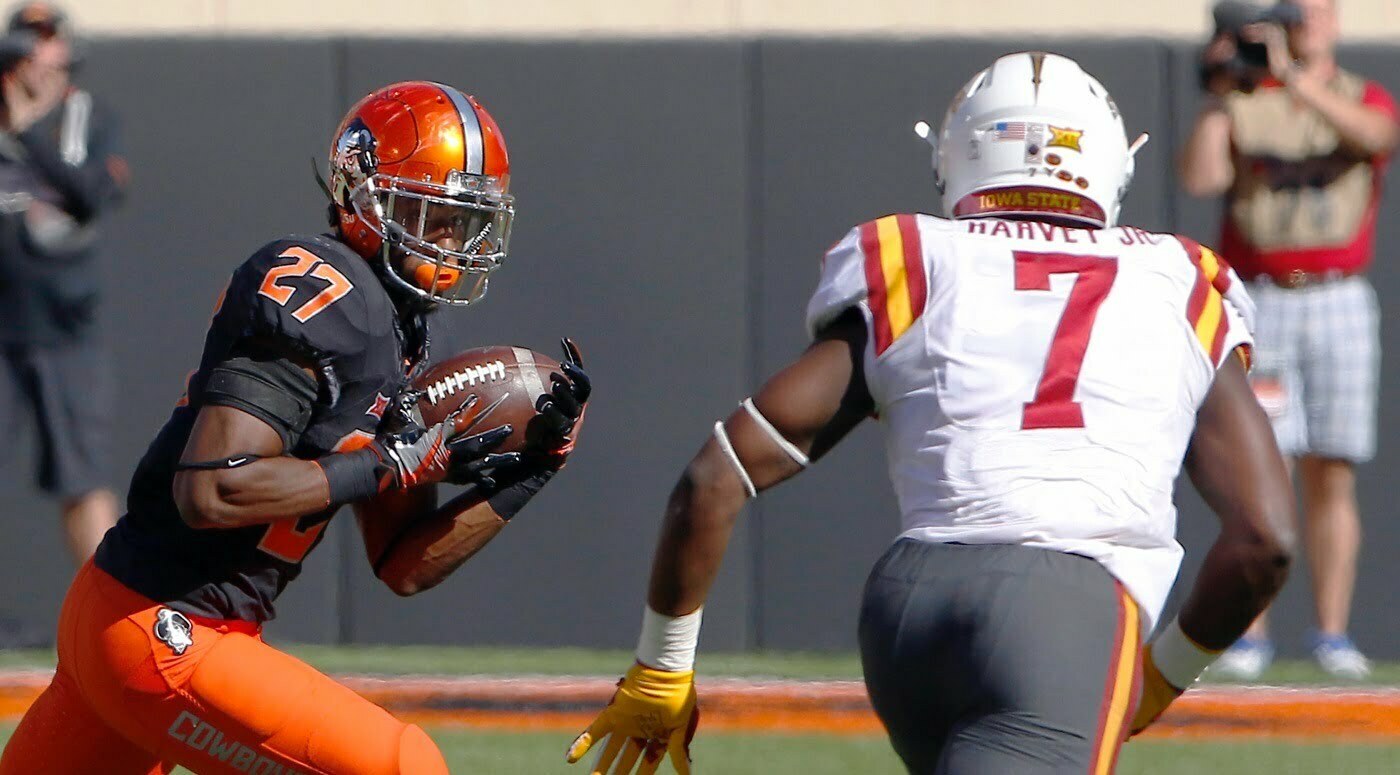 10 Thoughts are posted here, but I needed to empty the notebook (as always). Here is almost everything I wrote down during that crazy game in Stillwater on Saturday.

• I was watching the end of the Kansas-TCU game as Kansas successfully completed a hook & ladder against TCU on 4th and 22 and all I could think was, “Why don’t more teams run a hook and ladder as a regular play?”

• Gundy said the following at halftime to ESPN “We need to find rhythm [on offense].” My question is why OSU isn’t better at flipping back and forth from passes to runs. It feels like we run 20 passes in a row follow by 10 runs and so on.

• Jacob Park was terrifying. A homeless man’s RG3. His ceiling is about a Sears Tower’s difference than Joel Lanning. Why is Lanning playing over him when you’re ISU and you’re playing with nothing to lose? I was delighted when Park threw the pick in the fourth quarter and they rode Lanning at the end. Lanning is not a come-from-behind-in-the-final-quarter QB, but Park could potentially be.

• One of my biggest pet peeves is people adding an “s” to the end of different words when there is no “s.” The announcers were doing it to Jacob Park.

• Can you imagine refs conversing with Gundy on the sidelines these days? “That’s in-ack-rut! Did you do our Central Michigan?!”

• One minor complaint about the offense. Sometimes it feels like we’re trying to do too much from week to week. I just finished The Perfect Pass which essentially is about the invention of the Air Raid, and it was talking about how original Air Raid teams thought 12 plays was too many. I was wetting myself. Maybe OSU is just not talented enough like it was in 2011 to have that small of a playbook, but sometimes I wish we would run fewer plays and run them faster and better.

When your cattle broke out of the barbed wire fence and you can’t get ‘em back. pic.twitter.com/xlPoOzEbdD

• A reality of the first half is that OSU should have been down by more than it was but one of Iowa State’s receivers tried for a one-handed TD catch when two hands would have meant six points. I don’t know who flipped the secondary switch from off to on in the second half, but I’m glad it was done.

• Iowa State gained 19 first downs in the first half and just seven in the second. Still matched their season high (set last week against Baylor).

• Allen Lazard can play on any team I’m rooting for. Dude is a baller. I know he only had six for 55 yards, but he also had two TDs and was a nightmare for Spencer to deal with. Him and Mike Warren deserve better.

• Sometimes I wonder if Rudolph clapping is why he fumbles. He does it so hard and so loudly. Even at home where it’s unnecessary. I know this is a conspiracy theory limb I’m stepping out on, but that Justice Hill fumble wasn’t 100 percent on Justice Hill. Some of it was on No. 2 which means the trend continues.

• This is quite perfect.

• Ashton Lampkin is running away with the Uni Heisman this year. • I actually thought Iowa State’s gameplan was pretty good. They just couldn’t execute it in the second half. It became clear in the final 20 minutes that they were going to try and grind OSU into dust to seal the deal, but they never could find the dagger touchdown, and OSU would not go away.

• Not OSU, but this was perfect.

Usually when Kansas misses a field goal at home the refs call a foul so they can shoot free throws instead.

• At one point in the second half I felt like this is how Iowa State fans must feel to be Iowa State fans. So much helplessness. Also, if you’re wondering, OSU could win every game until 2116, and it would just start to make a dent into making up for the 2011 game.

Have mercy on em, Devante! https://t.co/TwEwDwUFF3

James Washington has 165 all-purpose yards and a TD on eight touches. #President pic.twitter.com/8cfT6gSaGK

• There is a small part of me that is proud of OSU for not panicking and being patient and sticking with its stuff until it finally started working late in the third. I’m not sure the gameplan was to play rope-a-dope with Iowa State, but if it was, it worked quite well. Note: I also prefer 25-point blowouts.

• ISU actually looked a little tired on offense compared to OSU being tired on defense late in the game. That might have been a depth and talent issue.

• One of the catches Washington made that didn’t count.

• OSU depth chart is all kinds of LOL:

I do not understand.

• At one point on a Barry Sanders run the announcer said the following sentence with much gusto: “The genetics gets him to the 41” !!!

• I love the way the sun sets and the chill falls over BPS on October nights. I wasn’t there tonight, but if you’re a student and you’re not experiencing that, even for the crappy games, you’re really missing out. It’s something special. Fall nights are the greatest, and there’s something magical about the way the sunset disappears beyond the west end zone and that cold envelops everybody for the last quarter or so. The intro into some of those nights that lasted forever in Stillwater.