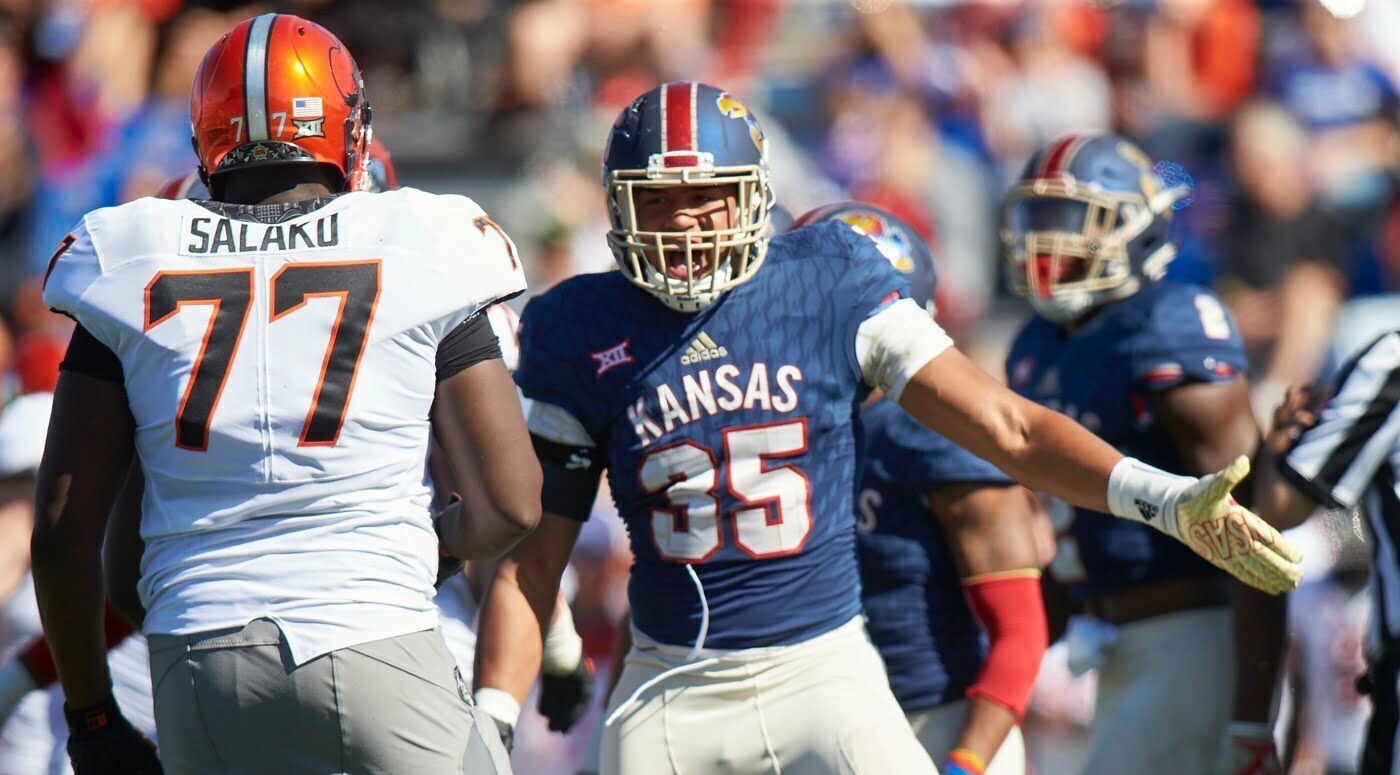 I posted my 10 thoughts on the Oklahoma State-Kansas game earlier, but I wanted to empty the notebook before heading into Homecoming week. All the stuff I was thinking during OSU’s 44-20 W over KU.

• I thought the unis were fine. Nothing to get crazy about. None of it really flowed that well together, but I’m always a fan of the gray pants. Might be time to retire the Gargantuan Chrome Pete helmet.

• Jalen McCleskey gets my Uni Heisman for the game. The socks. The number. The towel. The fresh kicks. Awesome. • I liked the way OSU started the game. Run, run, run. You’re better than Kansas. You’re more talented them (or you should be). Show them what that looks like early. Run the same three plays over and over and pop ’em with something good for a TD. OSU didn’t complete the first drive, but I still liked the mindset.

• Nothing to do with our game, but this crushed me.

Verne Lundquist called our March Madness game in '09. I leaned over pregame and said "Who the hell is Happy Gilmore?!" Rafertee lost it.

• Good crowd, Kansas. There will be more people inside Phog Allen for the OSU basketball game than there were at this game today. Has to be more KU fans in Phog Allen than at football games on a regular basis. Not paid attendance but actual attendance.

Kickoff time in Lawrence. #OKState vs Kansas. Cowboys get the ball first pic.twitter.com/6OKFdrXSgQ

• Early on it felt like Kansas had to string together, like, 25 play drives. Then later on Montrell Cozart actually did this in some form or fashion. Astonishing.

• Justice Hill catching check-downs is my sweet and savory place.

The line on this game was #okstate by 24. #Vegas

• This run was awesome. Everything Justice Hill does is awesome.

• If not for the weird brick pattern, KU’s unis would have rocked. I have a soft spot for off-color, slightly yellow pants like they wore. I thought they looked tremendous.

• At one point in the game I wrote this sentence: Why does it seem like KU has better athletes than us?

• This is actually a great idea. I never want to play KU before noon in Lawrence ever again.

At least experiment once.

• OSU’s longest kickoff return on the season is 26 yards?! Did I hear that right? Long live Perrish Cox.

• We somehow have an overwhelming defensive line now which matters over the course of a game. You can sort of say, “well, they’re going to take over lesser teams at some point, and that’s going to be a problem for those lesser teams,” and it usually works.

• He has lost control!

• We’re the best team in the country … at blocking kicks.

• This is not a position you want to keep putting yourself in. • Why is Jalen McCleskey in throwing a flip pass to James Washington?

• I greatly enjoyed the long marching drive in the middle of the fourth quarter that started on OSU’s four-yard-line. It went nearly 90 yards, and even though it only ended in a field goal, it essentially ended the game.

There's a human being under there. (via @sarahcphipps) #okstate pic.twitter.com/DF230O8tEC

• Glenn Spencer’s reaction to all those laterals was terrific.

• It’s a rarity to get Piesman love on a non-TD, but Oklahoma State got it on Saturday.