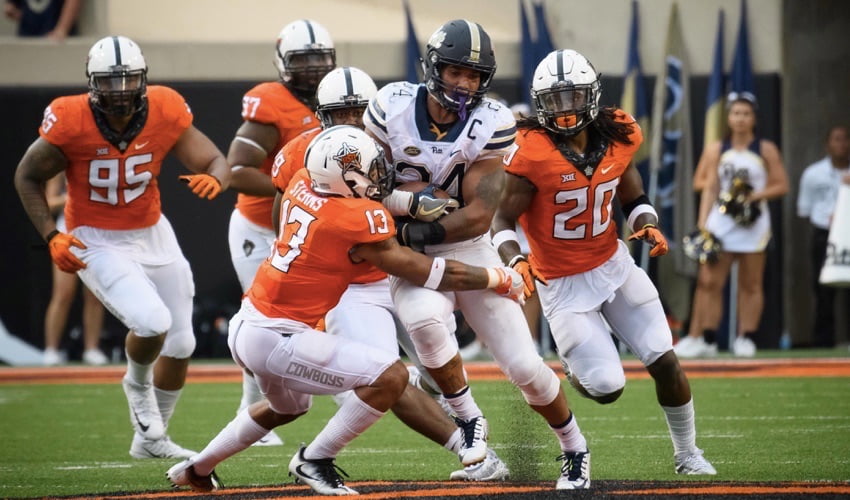 I posted my 10 Thoughts here already, but let’s get to the rest of the notebook on that wild, goofy game in Stillwater on Saturday as OSU hung on 45-38 against Pitt. • Why did we roll Grogan out there from 49 yards when he has never hit from longer than 47? Where was the freshman that hit from 54 last week?

• This is a brutal game to play right before Baylor. Pitt brawls. There are going to be some sore dudes come Monday morning.

• First Westbrook in a Boz jersey. Now this.

Look who showed up on the sidelines @RealStevenAdams #H2P pic.twitter.com/6m4GEp9dP2

• I really like Cole Walterscheid. He’s a message board nightmare on the name front, but the dude can play some football. Other things I love: having a really good defensive front!

• The announcers assured me at one point when Rudolph went up under center that “Rudolph has been taught how to take a snap.” I laughed.

That ain’t a TD. pic.twitter.com/wHhYol2udQ

I mean that’s just not a TD. pic.twitter.com/PRo0gGgOqs

• It would appear that we are dealing with 3-4 random Mason Rudolph fumbles per year. Hopefully we got one out of the way today and least a few of the others bounce our way. A bizarre development. Does he have Alex Smith hands?

• You know that play where we hurry up as fast as we can and snap it and hand it off? Like we are trying to set a land speed record for fastest referee-whistle-to-QB-snap-call? We average about 0.5 yards per carry on it historically. But every year …

• This catch was ludicrous.

This is so difficult! https://t.co/Y1VOpU4ldV

• One thing is for sure: Rudolph has lost his touch on short throws. He’s in that “I’m Brandon Weeden and I have one speed: Insane” phase of his career. Weeden learned to temper it and settled in. Hope No. 2 can do the same.

• Rennie was terrific on Saturday, but I still think Justice Hill still feels like an auto four yards minimum. It’s frustrating to me that Gundy doesn’t trust him. Of course, he was also the reason Rudolph got bumped and Pitt recovered a fumble in the end zone in Q3 so maybe Gundy has a point.

• Pat Narduzzi had that “nobody in the Big 10 ran plays like this on me” look going for much of the game. That was enjoyable.

• This Chad Whitener play was impressive. Pitt’s fake end-around thing where they may or may not give it to the dude in motion is insane. I know Thomas F. warned us this was coming, but I was not prepared for how difficult it was to follow. Neither was the cameraman!

Big boy play here from Chad Whitener. Could have been a TD. pic.twitter.com/GYe5xTLaHu

Cameraman had no clue! pic.twitter.com/JU0zxsXT2g

• You guys can keep whining about Rudolph throwing high and I’ll sit here and watch him throw 25-yard outs off the wrong foot.

When the only person who can cool you off is you. pic.twitter.com/RpxO7KOOW4

• The announcers said OSU coaches told them they wouldn’t even see 50 percent of what they practiced for. That has to be frustrating.

• Lenzy Pipkins talking trash after a 35-yard Pitt run in the 3rd quarter was not the greatest moment in OSU football history.

• This was my favorite defensive play of the night. OSU knew what was coming and just destroyed it.

• Good on everybody who stayed tonight. It looked miserable and scary, but the folks who were there in the 4th rocked.

The magic weapon. Worked in Tulsa, didn't it @ginamizell ? https://t.co/o81LZfKJYN

• This is an incredible photo.

• Dillon Stoner had three special teams penalties on Saturday. Gundy called him “my man” afterwards and said he had a rough one (which he did).

• Ahston Lampkin is on my uni Heisman watch list this week. • Pitt’s QB was the most Pitt/Iowa/Penn State QB ever. Just a dang prototype.

Larry Reece: "This time, that WILL be the ballgame."

• Gundy ends the night as only Gundy can.