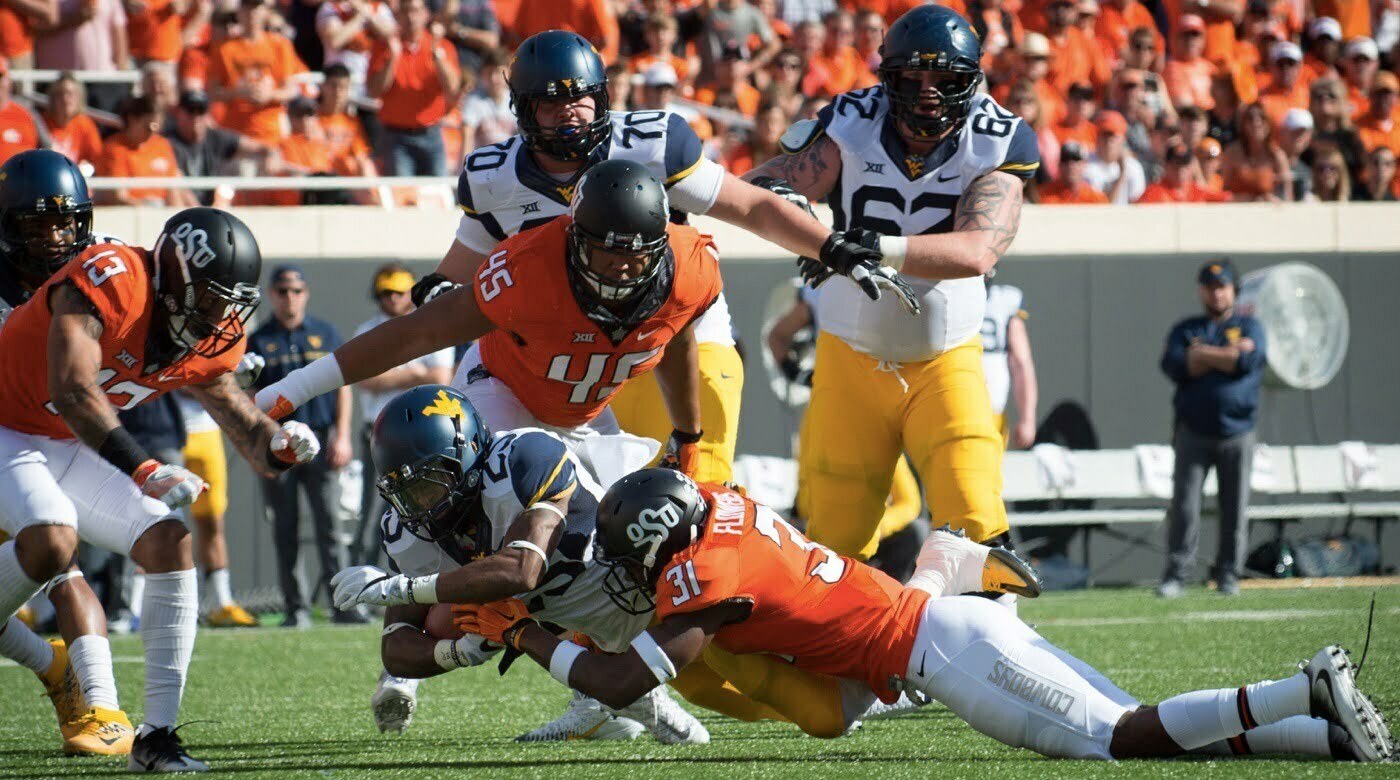 I posted my 10 thoughts here before Carson and I hit up our live pod and the neon palms on Saturday night, but I wanted to empty my notebook before we move on to next week. It’s thick. Let’s dive in.

• Tri-color on tri-color uniform matchup was as good as it gets for me. A throwback on both sides — WVU with its color combo and OSU with its helmets. Absolutely spectacular.

• Watching a Dana Holgorsen huddle is pretty disconcerting. It has to be like watching your son or daughter kiss their first significant other for the first time. Just like, “what is happening? WHERE DO I DO WITH MY HANDS?!”

I love this man. https://t.co/sBCeDOYRtq

• We give the OSU crowds (and specifically the student section) a lot of flak. They deserve all the credit for showing out and staying until the end of a really important ballgame.

• WVU with a great defense is actually sort of scary. Dana always seems to pull the right strings on offense. I know it didn’t work out because of

• Literally every single thing about the helmet was great — the stickers honoring Homecoming and plane crash victims, the OKLA STATE on the underside in the back and the white chin straps. Perfection.

• I wonder what the percentage of announcer mentions of Joe’s cheese fries is over the years. Has to be high. Like, 90 percent-ish in the Gundy era or something like that.

• Ramon Richards completing a goal-line track star finish on a touchback is hilarious and perfect.

I wish MY would implement more of these shallow crossers.

• Well we are certainly proud of it.

Oklahoma State has brought the ’45 title trophy onto the field for a video presentation.

• OSU played with so much juice throughout the day. Where is that against Iowa State? Kansas? Why does it take a top 10 game on Homecoming to bring it out of them?

• I thought Yurcich was dealing in the first quarter. Banging all the right buttons.

• WVU plays per game by year:

• OSU legitimately could have forced four turnovers and absolutely blown the doors off of WVU if Ramon had caught that one in the first half.

should have explained why he didn't have one before https://t.co/aD23DKn4EM

Ramon Richards did push-ups on the sideline after that dropped INT. He had to accept Mike Gundy's Farmville request after the WVU touchdown.

• Vincent Taylor is a monster. That’s my only note on him. I literally did not write anything else. He’s just an answer.

• Turnovers inside your own 20 are so difficult to recover from. I wrote that after WVU’s first one. They had two more. I bet if you go back and look at every game since 2000, teams that turned it over twice or more inside their own 20 lost 95 percent of the time.

Gundy asked about overcoming two losses…"One loss right? Can someone get that fixed? With all the attorneys in the country?" #okstate

• Are you ready to look at some home splits for Rudolph? He’s started 12 games at Boone Pickens Stadium.

• Chris Lacy is a monster too. Underused, undervalued. I loved what Mike Yurcich said about him on Saturday.

“His plays were huge just as far as ‘money plays,’ as I call ‘em,” Yurcich told the O’Colly. “His ability to come through when we need him is awesome today. I’m so happy for the kid. He’s such a great person. He’s a tremendous young man. He’s squared-away. I’m a big fan of that kid, and he came through big time today.”

• Tre Flowers had some monster hits on Saturday. He’s turned into a really big hitter over the latter part of his career.

When you beat a top 10 team on Homecoming, you wave the wheat… #okstate pic.twitter.com/wXSYpsDSd9

• Skyler has a surprisingly big arm for a dude his size. He threw one deep ball on Saturday, and my jaw dropped. Stunning something like that could come out of his hand.

• OSU only had 358 yards on Saturday which is a pretty bizarre number when you consider how thoroughly it dominated the game.

• I thought this many times in the first half.

• Rudolph was cash money over the middle. Holgorsen and Tony Gibson (WVU’s DC) said, “beat us with Rudolph.” OSU did.

• Hill and Carson both ran patiently, got some really good, tough yards that don’t show up in the box score.

Today's attendance of 59,584 is the third-largest in #okstate history.

• The musket on the WVU helmet feels forced.

• It was a tough day for Michael Wilson on Saturday. He had at least two (and I believe more) penalties on the offensive line. OSU misses Larry Williams.

• This was pretty funny.

• The long black mark for me on Saturday was the miscommunication between Rudolph and Chris Lacy at times.

• It took OSU 43 minutes to match the combined point output of TCU and Tech against WVU. How about that?

• OSU had 93 percent chance to win going into the fourth quarter. Kyle Boone alerted all of us of that with 15 minutes left. We were aghast.

• I have a deep affection for the McCleskey underneath route.

• Chris Lacy had a big boy third and eight catch in the fourth to set up his own TD to effectively seal the deal. He was impressive throughout.

• Brady Quinn started talking about OSU in the CFB Playoff. Can we get through KSU first?

This is how you get helmet stickers. https://t.co/5I5Thlp3lo

• My father-in-law got a painting of his dedicated after the game in the Spears School of Business suite at BPS. The painting was an OSU rider on Bullet with GIA in the background in front of a sweet sunset. It’s pretty awesome. Very proud of him.