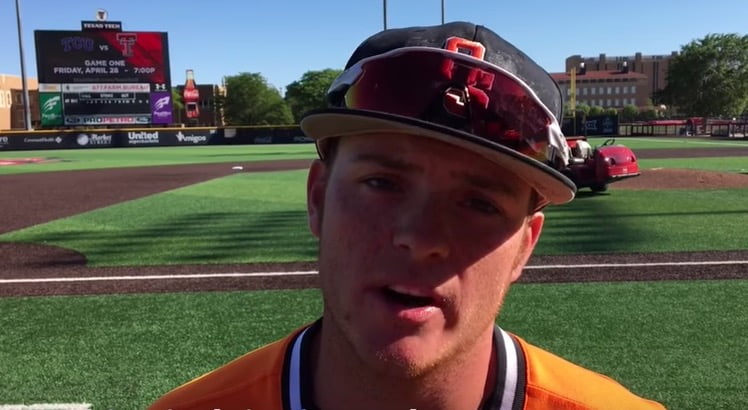 Oklahoma State’s baseball team is trying to make a last-minute run towards the postseason. It got off to a solid start with last week’s walk-off win over ORU, and it continued over the weekend as the Pokes went to Lubbock and took two of three from No. 4 Texas Tech.

OSU won Friday’s contest 12-10 after both teams (oddly) scored six runs in the 6th inning. It was a game outfielder Garrett McCain called a “roller coaster.”

“We executed when we needed to and ultimately got on the right side of the scoreboard,” said McCain after going 2-5 with a home run and 5 RBI. “It’s a lot nicer to be on the winning side.”

The Pokes lost 8-2 on Saturday before bouncing back to win a thriller on Sunday. The two teams combined for one run and eight hits through eight innings on Sunday as Cowboy junior Blake Battenfield went 7 and a third and allowed just one run on four hits.

Then in the top of the 9th inning OSU finally knotted things up on a Garrett Benge hit. After Texas Tech left the bases loaded in the 10th, Benge got the go-ahead hit in the 11th and the Pokes added an insurance run to walk out of Lubbock with the 3-1 win.

“It was an outstanding game. I thought Blake Battenfield pitched the best I’ve ever seen him throw,” said head coach Josh Holliday. “We couldn’t have pitched a better ballgame. Gutty effort. Really, really good week for our team. Three big wins against good teams. And wins that required a lot of toughness. I’m very proud of them and feel very good about what we just did.”

OSU climbed into a tie for 7th in the Big 12 standings with Baylor. Both teams are 6-9 in conference play on the year. There is a lot of runway left, though, and the second-place teams (Tech and West Virginia) are separated by just three games from those tied for seventh (OSU and Baylor).

The Pokes play Texas, Baylor and OU in consecutive Big 12 series to end the regular season.