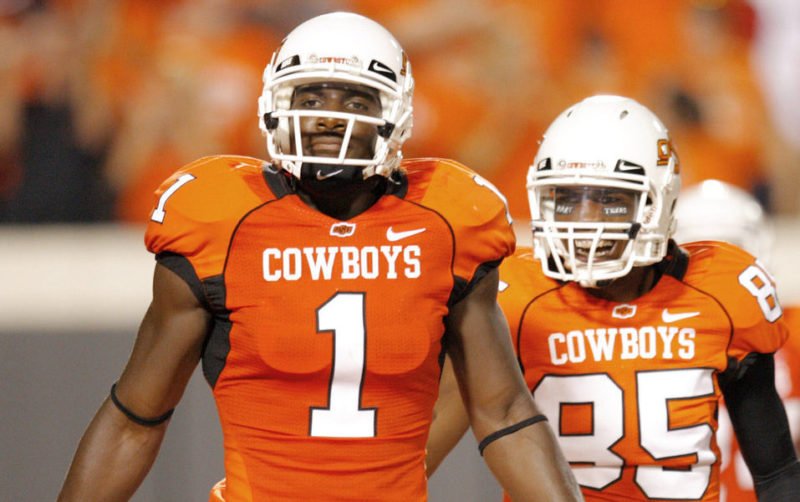 Oklahoma State has a proud heritage of game-changing wide receivers and a lot of them had some pretty memorable games. That’s why this list was not an easy one to narrow down. The criteria here is an amalgamation of most historic, most impressive and most memorable.

Here are the first five of our countdown.

The first game on our list probably wasn’t memorable for anyone reading this since it occurred 68 years ago. But it was impressive and definitely historic. Alex Loyd played end and linebacker for Oklahoma A&M from 1945 to 1949, making him a freshman on the undefeated team that was awarded a National Championship a year ago.

During his senior season, he paved the way for receivers to come. In a 55-14 loss to Kansas — this was a different era — Loyd hauled in a record 16 catches for an unheard of 178 yards. That season, Loyd led the team with 47 catches for 657 yards, earning All-Missouri Valley Conference honors. Oklahoma A&M would finish 4-4 in Jim Lookabough’s final season as head coach.

This was a different time in college football. This type of receiving production was flabbergasting. In fact, this was just the seventh 100-plus yard receiving game in OSU history. That 178 yards stood as a school record for 21 years until Hermann Eben tallied 179 yards against Kansas State in 1969. Loyd’s 16 receptions is still a single-game Cowboy record.

In the wake of the departing dynamic duo of Barry Sanders and Hart Lee Dykes, the Cowboys predictably regressed in 1989. They went from 10 wins to four in Mike Gundy’s senior year but there were still some important moments and milestones.

Curtis Mayfield was the Cowboys’ leading receiver that season with 879 yards and four touchdowns. He was the fastest player on the team and even earned the nickname “Cadillac” in high school for his smooth running style. A sub-4.40 guy, Mayfield also led the Big 8 in kick return yards in 1989 with 576.

His career game came in a record-setting, yet losing effort to No. 4 Nebraska. Mayfield caught six receptions for 208 yards and two scores. That’s efficient. He still ranks third at OSU in career yards-per-catch average behind only James Washington and Adarius Bowman.

That 208-yard performance stood as an Oklahoma State single-game record for 13 years. An all-time great surpassed that mark in 2002 — stay tuned. Two of his four receptions ended in the end zone — a 65-yard pass from Mike Gundy and an 85-yarder from backup Earl Wheeler that tied a school record for longest passing play to date. The Cowboys lost the game 48-23 but Mayfield’s 305 all-purpose yards still rank 10th-best for a single game in OSU history.

We sometimes skim over Dykes when rattling off the great receivers to have come through Stillwater. It’s probably just a case of recency bias. But the All-American was an all-time great. He is the all-time leader in receptions, receiving yards, and receiving touchdowns in Big 8 history. He recorded 18 100-yard games. When he left Oklahoma State, he held nearly every receiving record in the books.

Dykes’ 163 yards in the SeaWorld Holiday Bowl wasn’t even his career high. But it makes the list for its significance. This was before every game was on TV and we broke down every play on Twitter. In fact, during this — the most historic season in Oklahoma State history to date — only four games were televised. Plus, in 1988, there were 17 bowl games, and they just mattered more to people.

Barry Sanders had been named the Heisman trophy winner early that month. This was the last ride for the dynamic duo and they took full advantage, drumming No. 15 in Wyoming in San Diego 62-14.

Most importantly, this capped off the greatest era in Oklahoma State football to that point. It also put an exclamation point Pat Jones’ last winning season in Stillwater, and thus began an 8-year bowl drought for the Cowboys.

James Washington has had some memorable moments during his time at OSU but this game helped cement him as one of the top receivers in the country. Washington touched a football only four times during regulation in Lubbock and he had 200 yards and two touchdowns to show for it. Not much to argue here.

Washington followed this one up with another game that could just as easily be in this spot, when he went for 184 yards and three scores on just five catches against TCU.

The Cowboys were 7-0 when they headed down to Lubbock. They were just one week removed from the Homecoming tragedy and found themselves in serious jeopardy of suffering their first loss of year. In the first half, Tech had all the answers. Each time the Cowboys seemed to be gaining a foothold in the game, Pat Mahomes would make a crazy play or Jakeem Grant would break loose for a field-long score.

After some reported shower huddles at halftime, OSU came out renewed and pushed ahead thanks to heroic performances from several Cowboys. But Washington was the MVP hitting the Red Raiders with two second-half back-breakers — a 75-yard reverse play that ended in the end zone and a 73-yard score from J.W. Walsh that gave the Cowboys breathing room late. OSU kept the streak alive and headed home with their eighth-straight win against Tech.

Dez Bryant sliced up the Cougars’ defense to the tune of 236 yards and three touchdowns — and he did on only nine catches. This was a decent Houston team that went 8-5 that year and ended the year with a bowl win over Air Force. Zac Robinson had one of the better passing games of his career with 320 yards on 21 attempts and three touchdowns. Dez also returned three punts for 75 yards and another score.

This was really the Dez Bryant coming out party. To this point, Dez was still the buzz-worthy young receiver without a national following. He had punched a couple of 100-yard tickets his freshman year — including the Cowboys’ 49-33 win over Indiana in the Insight Bowl — but he wasn’t a household name yet.

That 2008 season really laid the groundwork for the Cowboys as a high-powered offense. After this win, the Cowboys continued to a 7-0 start, and finish with 9 wins for the first time in 20 years. They’ve come short of that win total just once since then.