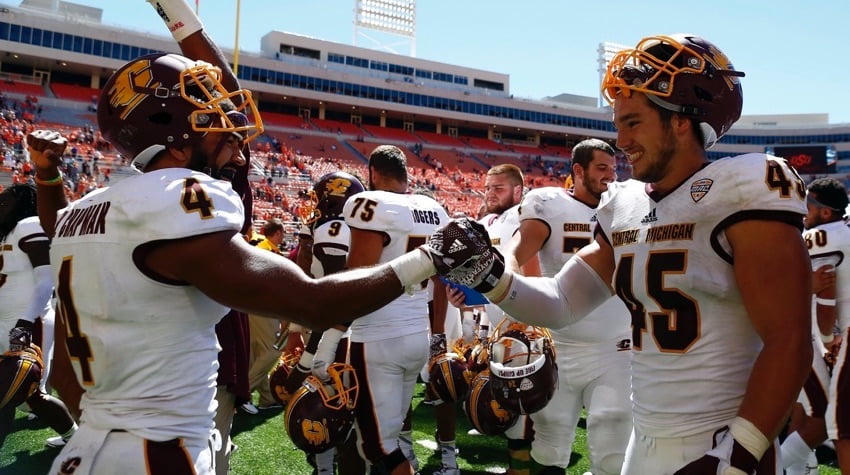 I promise we’re going to put this to bed after today … or maybe Tuesday-ish. But I had some fun email exchanges over the weekend I thought I would share. Let’s jump in.

Love the blog and pods! I would like to hear your thoughts on what you think is at the root of the problem of the football program. Even during the 10 game win streak last year we weren’t blowing the doors off of opponents. Is it a lack of “dudes” on the roster or is it just bad coaching?

Even if it is bad coaching/coordinating you would think we would have the dudes to beat CMU in our sleep. But obviously we couldn’t! As say root because over the past three years we have been pretty mediocre to borderline bad. This isn’t some knee-jerk rant because of the CMU loss.

It’s a great question. OSU was bad in 2014, good last year (although maybe lucky) and looks average so far this year (although I think they are a lot better than they’ve played).

I think it’s a combination of those aforementioned “dudes” and Gundy valuing continuity over getting the very best coordinators. I think he values coordinators who will stay for five years because he has “made” them over the Danas and Monkens of the world. I’m not sure that’s a bad thing, but I do think it *could have* created a sliver of mediocrity within program. Then again, this is what we want, right? We want somebody who will build a program. Not a revolving door of “zero Fs given” coordinators.

I don’t know what the right answer is, but the question is a fascinating one.

Just wanted to see if any writers thought the CMU player that caught the Hail Mary pass pushed off on Jordan Sterns.
When I watch the players running down field, I do clearly see he pushed Jordan in the back, it altered Jordan’s coverage path some and then he catches the ball.

Obviously of no consequence, but since we looked a many angles of this and I watched the play many times, it seems it could have been called. But probably had to be more obvious than what it was and the refs allow some contact.

Also, this disappointing loss for me is the worst one. I graduated from OSU in 1985. And it now supercedes this loss below. In 1983 we lost to OU on a botched onside kick by OU’s Tim Lashar where the onside kick hit OSU’s Chris Rockins right in the face mask.

OU had first called onside, then decided no. But the kicker did not know they decided to not do the onside. When the kick hits Rockins in the face mask, OU recovered, moved downfield, and kicked the game winning field goal.

The onside kick is at the 2:49 mark of this video

Oh my gosh, I’ve never seen video of that. I would have never recovered! It’s one thing for something like this to happen against CMU, but in Bedlam? My computer would be in ashes right now.

As for the push off. You can see it in the video below. Sterns isn’t taking circuitous routes because he’s working on his conditioning.

I’m just not sure a ref can call it in that situation. Although we are talking about the same refs who didn’t know CMU should not have received a play to end the game so who knows.

[My buddy] texted me around midway through the 3rd and asked me chances we lose this game. My response was 10 percent, and my reason was “we haven’t even cracked the first chapter of the playbook yet.” You said something on the blog this weekend that is really solidifying this for me about how we have been playing down to our opponents for the last 2 years or so.

The thing I think we have been doing is keeping the playbook as limited as possible in these early season games as possible until we absolutely have to open it up. And I think this is a M.G thing. We ran approximately eight plays for the entirety of the first 3 quarters. And honestly I think Gundy values these kind of things more than most coaches. We do this deal where we want to win games but want to do as little/show as little as possible to do it. Just about always, this works, this time it did not.

I’m with you on the Gundy thing I think. Why did we go to McCleskey 289 times? What was that all about? It’s not even a playbook thing for me. It’s an attitude thing. We just play down to opponents. Always have. We torch TCU last year with pretty much the same team and play even with CMU this season? Come on. It stinks, and is one area I wish Gundy was better at (see Briles, Saban, Urban just MURDERING teams they’re better than).