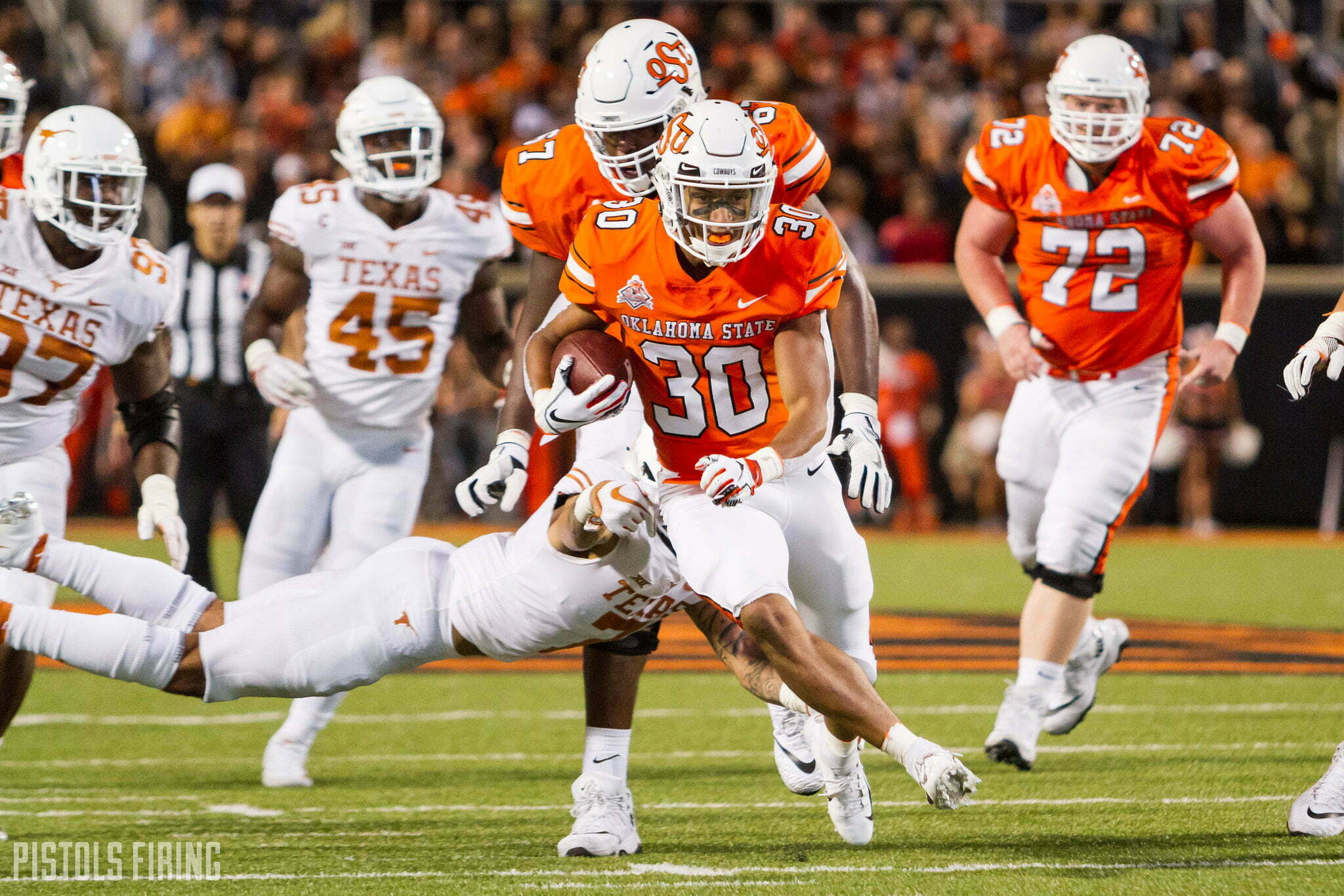 Football season can’t get here fast enough. With the return of their Big 3 and a defense that might actually be legit in 2020, the Cowboys are generating plenty of offseason hype. The type that had me scouring their schedule in February.

We’ve made it to the fourth and final chapter of our early look at Oklahoma State’s much-anticipated 2020 season. The first three are linked below.

By the time the Pokes get to Week 10 we’ll have a pretty good idea of just how high their ceiling actually is. And based on information we know a week before spring practice, there’s plenty of reason to think Oklahoma State can finish strong.

Let’s take a look at the final three games on Oklahoma State’s 2020 slate.

Week 10: At Home vs. West Virginia

The key to a win over the Mountaineers? Score 30. Okay, it’s not quite that simple, but it’s close.

In his first year, Neal Brown’s Mountaineers struggled to finish 3-6 in the Big 12. Those three wins came against Kansas (1-8 in conference), Kansas State (5-4) and TCU (3-6) and they won them by a combined 12 points.

WVU’s offense sputtered with former Sooner Austin Kendall at the helm. He was benched for sophomore Jarret Doege over the last three games. The Mountaineers won two of those but still never scored more than 24. The QB competition will likely come down to those two this spring.

The Mountaineers return leading rusher Leddie Brown, but he only totaled 367 yards and a touchdown last season. Kennedy McKoy (323 and three) has exhausted his eligibility. WVU will add three-star rusher Avarius Smith in the summer, but it should be Brown’s job to lose this fall.

WVU’s defense had a hard time limiting the league’s better offenses last season, save for a 17-14 loss to Baylor and a 20-13 loss to an OSU squad sans Spencer Sanders and Tylan Wallace.

But the Mountaineers do have some talent on defense with the likes of all-conference first-team tackle Darius Stills to headline a deep returning defensive line along with his younger brother and second-time all-Big 12 tackle Dante Stills. The two are in a three-way tie for most sacks (seven) among returning Big 12ers from 2019.

On the back end, the Mountaineers have a lot to replace with departing all-conference corner Keith Washington III and his fellow starter Hakeem Bailey both graduating, as well as all-conference safety Josh Norwood.

Maybe it is that simple.

The Mountaineers were last in the league in scoring offense (20.6 points per game), rushing offense (just 73.3 yards per game) and total offense (321.9 yards avg.)

In nine Big 12 games, WVU reached 30 points just once — in a 42-31 loss to Texas. It only took 20 points for the Pokes to come out of Morgantown with a win last year, so unless things change drastically for the Mountaineers, 30 might do it.

Brown and his staff will need to figure out how to manufacture points and offense if they want to avoid West Virginia’s first two-year bowl gap since 1991 and 1992.

Another program in Year 2 of a regime is Kansas State. Chris Klieman fared much better in his first year on the job, leading the Wildcats to an 8-5 finish. In 2018 — the final year for hall-of-fame coach Bill Snyder — K-State went just 5-7 and missed a bowl for the first time in eight years.

Returning is Skylar Thompson, who the Cowboys finally got a win over in 2019. Thompson was 2-0 in his first two tries against OSU and is undefeated against the Pokes at home.

Nick Lenners was an All-Big 12 fullback as a sophomore last season but, like OSU’s Cowboy Backs, lined up both in the backfield and at tight end. The 6-5, 252-pound Lenners not only cleared the way for plenty of K-State’s very K-State rushing offense last year, he hauled in 13 catches for 163 yards and a score. Expect that production to increase in his second year on offense.

The ‘Cats had an even offensive split rushing for 2,314 yards and passing for 2,352 (much to envy of Mike Gundy, I’m sure). In all seriousness, K-State was dead-last in passing offense in the league. If the Cowboys can make Skylar Thompson throw it more than he runs it, they will have a pretty good chance.

Kansas State came in second in the Big 12 on defense, holding teams to just 21.4 points per game as well as second in the league in points per drive allowed (1.93). The Wildcats return all-conference DE Wyatt Hubert. As a sophomore he was the other part of that tie with the Stills Bros. of sack leaders the league has coming back.

Key to Success: Avoid the Trap

Meant as no disrespect to the Wildcats, this key is all about what we’ve seen from OSU in recent matchups with K-State. OSU sleepwalked into the 2017 matchup with K-State in Stillwater allowing Thompson and Byron Pringle to torch the Cowboys through the air. Kansas State doesn’t torch people through the air. The two hooked up for three passing TDs, the most in either of their careers.

A year later, the Pokes didn’t get off the bus in Manhattan until the second half and by that time it was too late. Whether or not KSU is in the hunt for the league, OSU cannot afford any lulls in the Little Apple.

The last time the Longhorns were in Stillwater, the Cowboys earned a big-time win and Mike Gundy birthed yet another viral GIF.

But the last time OSU met Texas, the ‘Horns handed the Pokes their first loss of 2019 and broke a four-game series skid. Something’s got to give and the implications could be huge in the race for No. 2 (or No. 1?) in the league.

Following their first 10-win season in a decade — and his announcement that they were baaaack — Sam Ehlinger’s Longhorns regressed to eight wins and were one of four teams (OSU included) to finish 5-4 in league play.

In lieu of a key to success, I’m just going wish upon a marshal’s star that we get an orange-on-burnt orange matchup that matters in the final week of the regular season.

Baylor doesn’t look equipped to catch lightning in the bottle in consecutive years, especially now that Matt Rhule traded out coaching Charlie Brewer for Cam Newton. So that second spot in Arlington at the end of the year will likely fall to one of a handful of teams with OSU and UT looking like the most capable.

The team that (probably) believes it’s been No. 2 in the league over the last decade-plus facing off against the one that actually has been the second-best, fighting it out on Lewis Field for a chance at a rematch against Oklahoma for a Big 12 crown.

Add in the return of Mike Yurcich to BPS, the implications on Tom Herman’s tenure, the Spencer Sanders/Texas storylines — all the storylines — And this could shape up to be one of the biggest games of the year and one that defines OSU’s season.