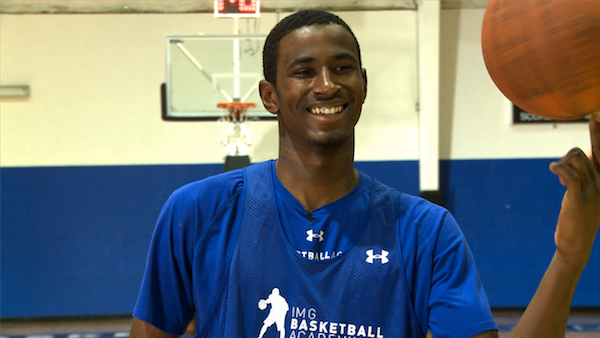 (Update: Daniels chose UConn today in a seemingly out-of-the-blue move. And that’s not a Kentucky/Duke pun. With Calhoun’s history and this kid’s track record I’m sure everything was on the up and up for Daniels to pick a team as far away from his hometown in California as you could possibly get without playing for Vermont. Thanks for getting our hopes up Papa Gottlieb and enjoy your forthcoming probation, Connecticut!)

If you haven’t been following the DeAndrama, I’d like to congratulate you on having more important things to worry about, as well as fill you in with a short summary:

DeAndre Daniels, the #10 recruit in the 2011 high school basketball class, hasn’t decided on a college yet. The slinky 6’7 190 lb. forward from California enrolled in the famed IMG Academies down in Bradenton, Florida a year ago where he’s been working on his game. As a result he’s shot up most recruiting boards over the past 12 months, finally landing in the top 10 this year.

Daniels says he models his moves after Kevin Durant and yet his highlight videos reveal a stiff awkwardness Durant probably grew out of when he was 8. Think more of a skinny, bizarro Amare Stoudemire.

You’re probably wondering why we care about any of this right now. Well, we don’t really, except that there have been rumors swirling that Oklahoma State recently entered the mix for his services, along with most of the other 344 Division I schools.

The Daniels coup would give Travis Ford a double dip of top 10 talents for the coming year, a feat many once thought only Scott Drew could accomplish among current Big 12 coaches. The last two years of Daniels’ recruitment have been an absolute circus act though.

July 2, 2009 – Daniels commits to Texas citing “I decided on Texas because of the basketball, academics and life after basketball” and “I started liking Texas when Kevin Durant went there.” Hard to fault him for the latter, I did too.

August 17, 2010 – Daniels de-commits from the Horns. Something about Rick Barnes’ inability to read a playbook was the rumor…

January 6, 2011 – Daniels is supposed to announce his new decision on a college between the trio of Texas, Kansas, and Kentucky. He does not decide.

April 15, 2011 – Daniels visits Duke and has also invited Florida in the fold.

May 29, 2011 – Doug Gottlieb’s dad (yeah, I have no idea) tweeted “odds are Daniels ends up at OSU.” He then said CJ Guerrero played AAU with Daniels and talked him into coming to Stillwater with JPO (another Cali kid), whose name he bludgeoned to the point that it was barely decipherable.

June 4-5, 2011 – Daniels is reportedly supposed to announce his intentions (again) and fails to do so. Allegedly San Diego State, Oregon, and Minnesota have entered the mix along the way. I’m not making this up by the way.

So here we are, two years after Daniels’ initial decision and no closer to a verdict. Daniels’ flip-floppage is beginning to make Brett Favre look like the George Patton of sports decision making.

The final date for letters of intent to be signed passed on May 18 (without Daniels’ signature, obviously) which really means nothing other than 8-10 coaches will be sweating it out until classes start in September.

Do I want him to come to OSU? Sure, why not add another talented, egocentric 18-year old to the mix. If we’re going to go down, we might as well go down magnificently.

In all seriousness though, do you really want a kid who can’t make up his mind for two years about where to play college basketball? It just seems like a very 5-star thing to do.

Think about the times OSU has been good, I mean really excellent, at basketball. Were Desmond and Gottlieb highly touted out of high school? Or the Graham brothers? What about Country and Rutherford, were they 5-stars?

Yes, I know Rivals didn’t exist back then but if you think a 7’0 tub from Gans, OK was garnering more than three stars from Rivals.com then you probably need to read a different blog.

Really, the only ballyhooed recruit the Cowboys have ever had who has lived up to the hype was James Anderson. My point is that I don’t care how many 5-pointed gold figures you have next to your name, I really don’t. Do you want to lift the lid on the best arena in the country while 13,611 in orange scream about your heroics? If so, then come here. If you just want to use Stillwater as your personal launching pad to professional basketball, then go somewhere else – Arizona, SC, Kentucky, wherever…I don’t care.

And in the end, nobody knows where Daniels is going. If they claim to know, they’re lying. All we know is this – school starts in three months and at that point it’s either Europe or one of these final ten (or so) teams for the last gem in the 2011 class. The one Ford is dying to get and the one I think I couldn’t care less about…

Film Study: Chuba Hubbard and the Dangerous Outside Zone