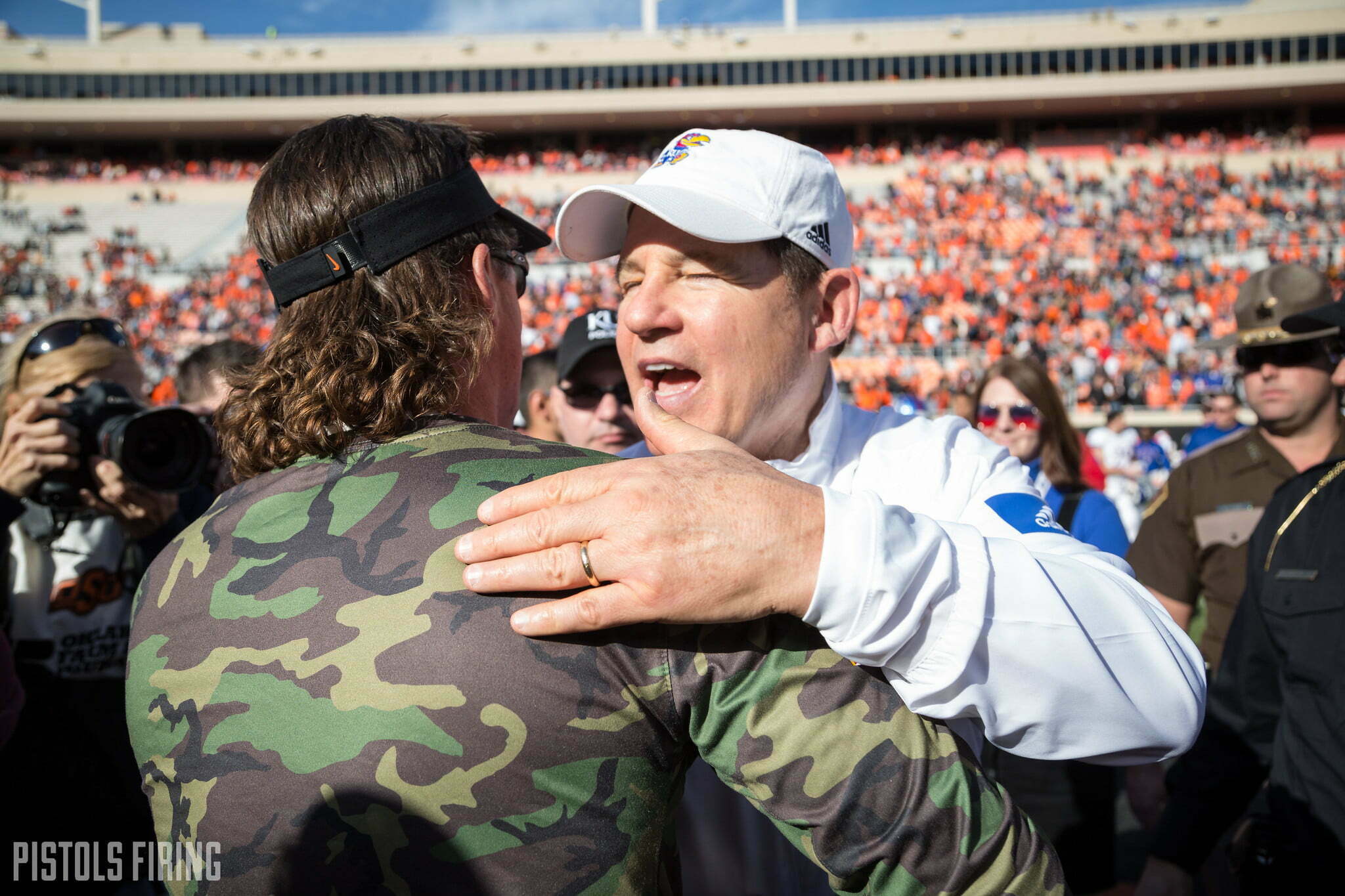 Year 2 of Kansas football’s Les Miles era isn’t off to a hot start.

The Jayhawks are 0-2 after losses to Coastal Carolina and Baylor. Now Miles hosts the school he used to coach: Oklahoma State. Here are three things KU’s coach said ahead of the matchup.

There are questions in Stillwater whether Spencer Sanders or Shane Illingworth will start Saturday’s game for the Cowboys, but Miles’ QB questions are even more advanced.

There were three quarterbacks listed on KU’s depth chart this week with “or” among them. Thomas MacVittie, Miles Kendrick and Jalon Daniels are the suspects.

Mike Gundy has talked extensively about the importance of quarterback reps during practice leading into a game. It sounds like a tricky thing to do with two QBs, much less three.

“I think you start with a priority quarterback in a guy that takes repos initially, maybe even more team reps than the other two,” Miles said. “Then the next quarterback period will step in, and then there will be a possibility of a third quarterback and he would step in.”

MacVittie started the Jayhawks’ season-opener against Coastal Carolina (with his name misspelled on his jersey) but suffered a shoulder injury in it.

There was a funny exchange between Miles and a reporter at Miles’ news conference this week as to which shoulder MacVittie hurt.

“Did he hurt his throwing shoulder in the opener,” the reporter asked.

“I do not know,” Miles said. “… I do know. I’m being deceptive, but I’m being honest. I believe his shoulder will be fine. “

Kendrick replaced MacVittie and finished the Coastal Carolina game 15-for-24 with two touchdowns and an interception, but KU lost 38-23.

After throwing only two passes against Coastal Carolina, Daniels, a true freshman, started KU’s Big 12 opener against Baylor. He finished that game 19-for-33 with no touchdowns, no interceptions and he was sacked four times.

MacVittie threw one pass in Stillwater last season. It was intercepted.

As bad as KU football has been the past decade, running back Pooka Williams has been a bright spot.

Williams, now a junior, has ran for 1,000 yards in each of his first two seasons with the Jayhawks, but he isn’t off to a hot start in 2020.

Through two games, Williams has gotten just 26 touches where he has gained 143 yards and scored twice. Williams has essentially split carries this season with sophomore Velton Gardner, who has 25 carries for 151 yards and a score.

“I’d like to get [Williams] a few more touches to be honest with you,” Miles said. “The idea that the ball, and there’s only one of them, you’d like to get it around pretty regularly to the other spots. We like some of the other options that we have, to get the ball to them. Keeping Pooka fresh is also a key piece.”

Chuba Hubbard’s 2020 season hasn’t yet lived up to the expectations his 2019 season set.

Yet still, Hubbard is fourth in the conference in rushing with 194 yards in two games, even with LD Brown’s uptick in carries.

Here is what Miles says makes Hubbard stands out from other ball carriers.

“He is a explosive, big, physical guy,” Miles said. “A tremendous running back. He’s got good vision. He’ll make a cut and make you miss. That will set him apart in my opinion. And combine all that with really quality speed.”