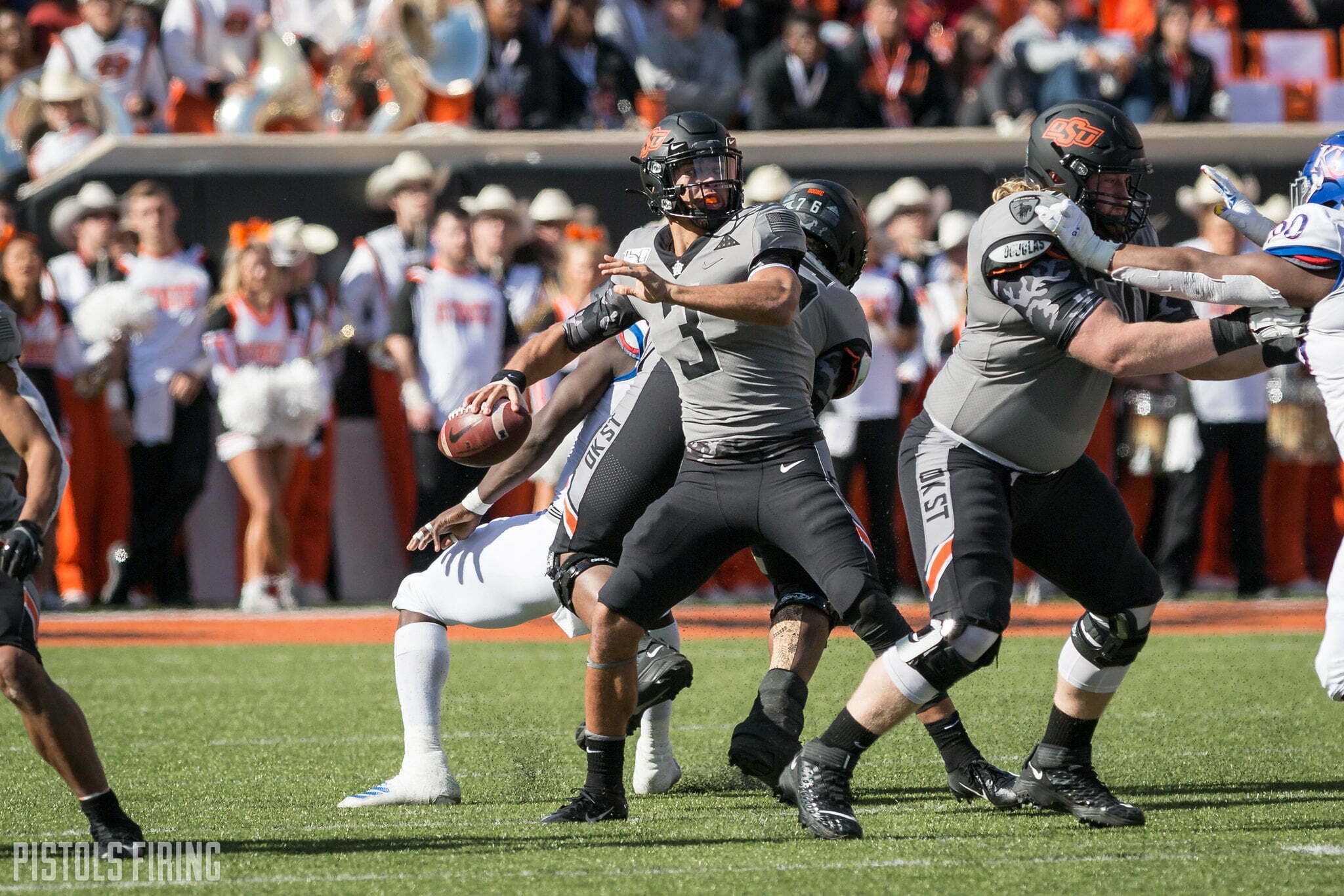 Spencer Sanders will start Year 2 of being the Cowboys’ QB1 on Saturday.

But before Oklahoma State faces off against Tulsa, Sanders met with reporters to discuss the upcoming season. Here are three things he hit on.

For the first time since he arrived in Stillwater, Sanders is entering a season with a quarterback coach who isn’t also the offensive coordinator.

“I think our relationship is amazing,” Sanders said. “I think not only do we have a football relationship, we can talk to each other on a personal level. I’ve dealt with a couple situations that I didn’t wanna deal with, but he was always a phone call away. He’s always a willing helping hand. Anything that goes on, whether it’s anything to do with football, I’m always calling him first before I go to [Mike] Gundy or Coach Dunn. I feel like our connection is very strong because not only do I answer to him every day, I respect him and I love him as a coach and I love him as a person.”

This will also be the first time Sanders’ QB coach will be waiting for him on the sideline after series, as Rattay is one of the six OSU assistants set to be on the field instead of in the booth.

“I think he can get in my tail a lot easier,” Sanders said. “I think it’ll help me, honestly. Just think about when you were a kid and your mom was chewing you out over a phone call, you could hold [the phone away from you] and kinda just play it off. But, when he’s in your face, it’s like, ‘Alright, here we go. Bring it on.'”

Injuries hampered Sanders’ and Tylan Wallace’s 2019, but the two are rejoined heading into this all important OSU season.

Sanders played only two games without Wallace last season, but with how he talked about him Tuesday, it sounds like they are still in a honeymoon phase of sorts.

“Tylan is phenomenal,” Sanders said. “He’s an amazing receiver, and not only is he a good receiver, he’s a great person. Tylan is such a great person that his motivation to get back and hold himself accountable for his job. He’s gonna do what he’s put on film for the past three years. Every single game he’s gonna give it his 100 percent. So, honestly, I love watching Tylan play. It’s awesome how he critiques his game. How he’s coming back off his knee injury, too, I think he’s doing an amazing job. The other day I watched him jump up and flip his hips and everything and come down, it was an amazing catch. He’s the same person.

“I think he’s balling even better than he was last year. It’s just Tylan, you’re excited to see him play. I’m excited to watch him on game day. I watch him every day at practice. He’s amazing as always.”

Wallace started fall camp with limited contact and a knee brace, but even with all the extra protection, Sanders said he still had to calm his WR1 down.

“There’s times I have to tell him to chill out,” Sanders said. “Like, ‘Hey, that was a bad ball. Leave it alone. You don’t need to make no tremendous catch right now. It’s just offense vs. scout team. I don’t need that right now. I know you can do that, so just chill. It’s alright. You’re good.'”

Sanders has an embarrassment of riches to throw it to this season that somehow got even more wealthy in the middle of fall camp.

Tay Martin transferred in from Washington State and got a waiver to be immediately eligible. He already has 1,615 receiving yards and 18 touchdowns in his career. On Monday, OSU coach Mike Gundy said he would expect Martin to “get an extensive number of snaps in Saturday’s game.”

“Everybody’s seen it; his snaps are documented,” Sanders said. “It’s out there. You can see it. So, he has reliable film. He’s showed who he is to back him up. I think he’s a great player. Recently, he’s been learning. Our playbook isn’t small. It’s humongous. I think once he really gets it down, I think he’s really getting down the Oklahoma State basics, now once he starts getting just the little minor things, which I think he’s already picking up on, I think he can be phenomenal just like any other receiver here.”