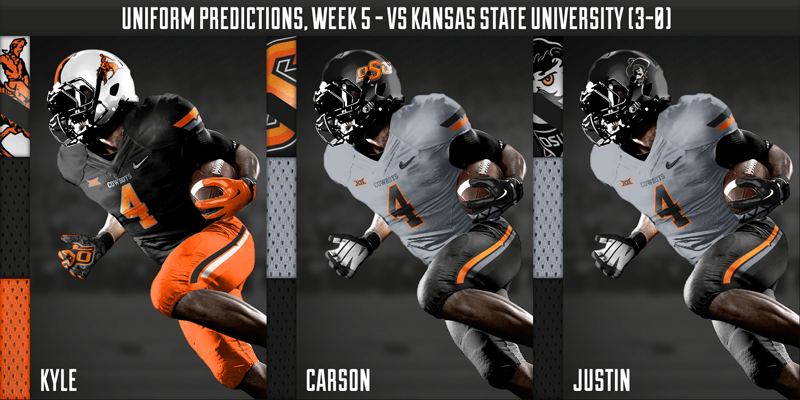 Porter:Bronco-Black-Orange. I’m thinking OSU continues its undefeated streak in the uniform game with a combo we’ve never seen before. You could put the bronco helmet on a t-shirt from K-Mart and a pair of Tiger Woods jeans and it would look world class.

Southwell: Black (Phantom Pete)-Gray-Black. Inverse of KState 2011. I feel like this is the time to wear gray this season if we’re going to wear it.

Carson: We learned the value of a good wardrobe in Austin last weekend. An Under Armour polo, Harbaugh khakis and a healthy dose of Dad Bod made the coolest man alive look like a JV high school coach. Not alright, alright, alright.

As for OSU, I think they finally break out some gray for the first time since 2013.[1. What gives? Did they lose a shipment of the jerseys? Recruits seem to choose them for photos more than any other.] I’ve been calling for this combo since the uniforms debuted.