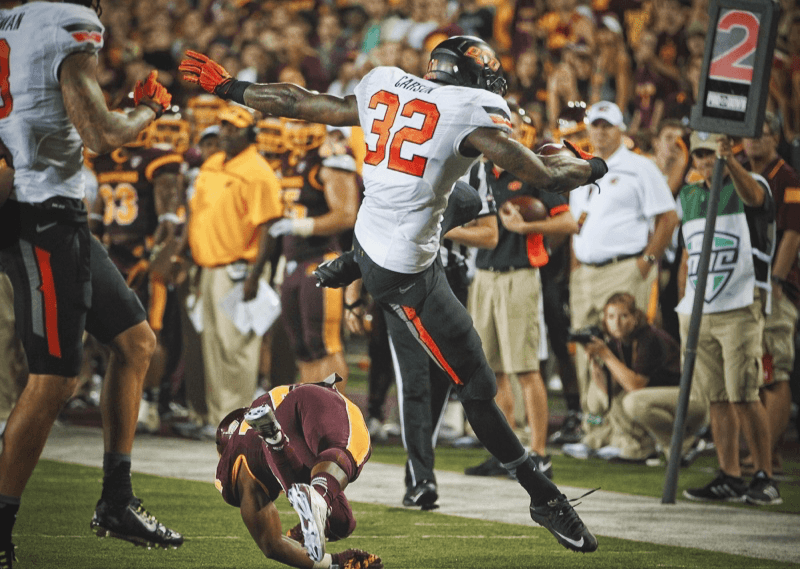 Normally, we would have posted these a few days earlier but with Labor Day falling on a Monday and OSU’s game last Thursday, everything is a little off right now (not unlike OSU’s offense!)

Anyway, I collected four key plays from the Central Michigan game (two of which our very own Braden Lara will break down in more detail later on). Here they are.

By the way, we’re skipping the TD runs by Mason Rudolph and J.W. Walsh as well as Rudolph’s TD toss to Marcell Ateman. Those were obviously key plays but I wanted to dig a little deeper.

The longest player on each side of the ball (Ateman on offense and Flowers on defense) had monster plays in the win. Can’t believe it was the first pick for Flowers (and first TD for Ateman).

Looking back at a few key plays from the #okstate game. Here’s Tre Flowers’ pick. pic.twitter.com/wjI8XjQNXg

My man. I wrote about Daniels this morning and how crazy it is that Sugar Loaf[1. This is what I’m calling him from now on as a reference to one of the biggest mountains in Oklahoma.] is a freshman (and just 17 years old!) He’s going to be awesome for many, many years.

Chris Carson was doing the Braxton Miller before Braxton made it cool. He ran like a man (i.e. like this clip) the entire second half.

“There was times where he was a little hesitant to accelerate through the hole in my opinion, but he made moves, made guys miss, made spin moves, jumped outside, got us some key yards at times,” Gundy said. “So, in just my opinion after one game, he gave us something that we haven’t had in just the ability to get out there and give us more yards than he should.”

And just for fun. This had no bearing on the outcome but I thought it was a sort of middle class man’s version of what Joe Mixon did in Norman on Saturday.

And lastly, Chris Carson’s hurdle at the end of the game. pic.twitter.com/4AQXuTXK2t — Pistols Firing (@pistolsguy) September 8, 2015