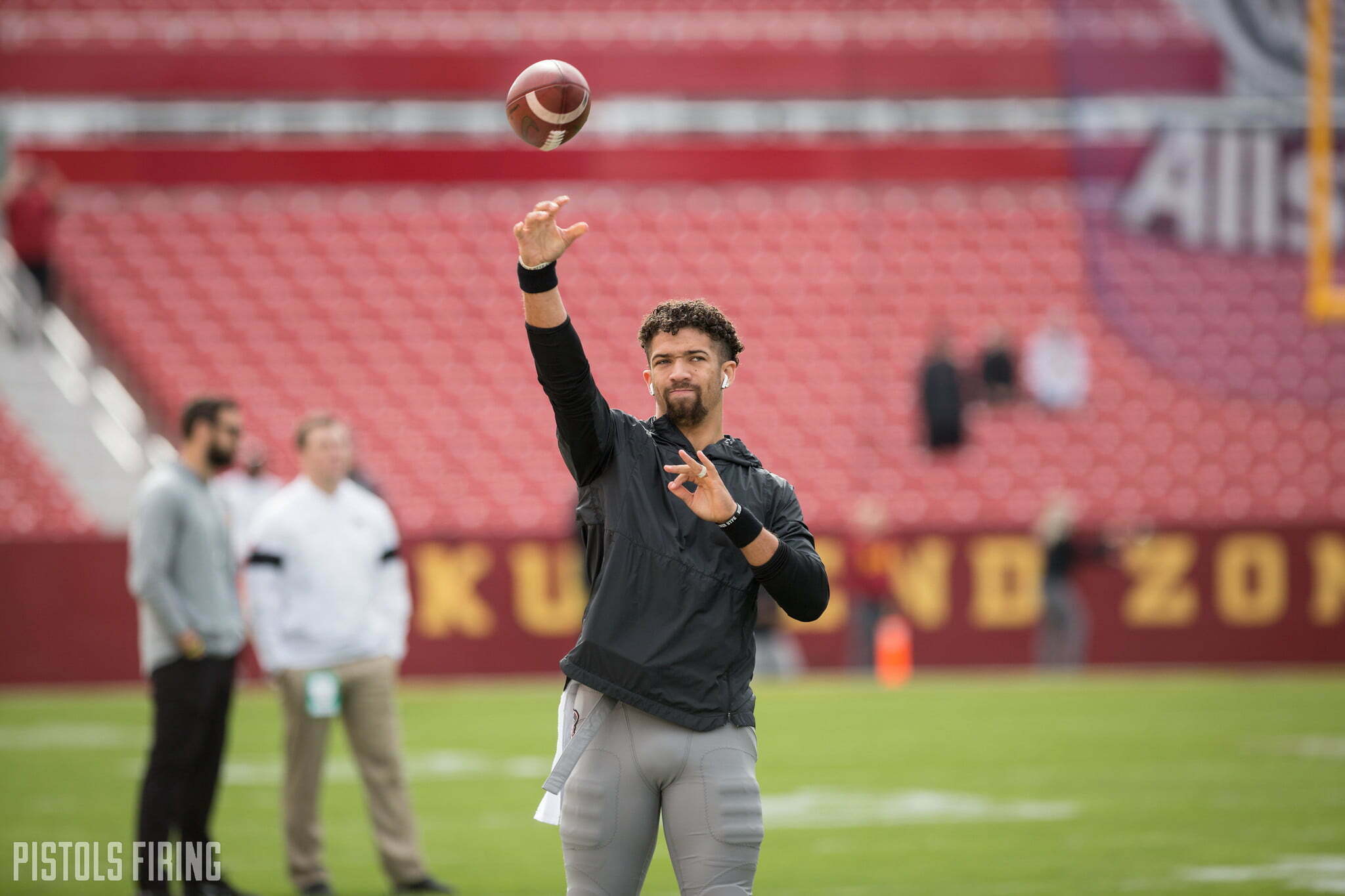 Through the first 13 starts of Spencer Sanders’ career, a not-so-great trend has materialized. For all the arm and leg talent, the highlight reel plays and luster, he sure has a propensity to be dispossessed of the football.

That was highlighted in a rough patch of games last year that included 12 total turnovers in his first four Big 12 starts.

In Year 2 as the starter, things were supposed to be different, but they haven’t been. A big part of the blame for the Cowboys’ first loss of the season last Saturday can be thrown at his feet.

Many wanted to, and did.

All three of Sanders’ three giveaways resulted in Texas starting inside the red zone. All three resulted in points in a game that went to overtime. And with each one online murmurs grew into outright protest among an antsy fanbase that knows opportunities like this don’t come around every year for OSU.

But Spencer Sanders is still the guy in Stillwater and don’t expect that to change any time soon. Here are three reasons why, along with thoughts moving forward.

1. The Ship Doesn’t Turn Around That Fast

A lot of the decisions Gundy has made over the last two-three years have been about laying the groundwork for this season. The hard truth is that programs like Oklahoma State don’t get legitimate title shots every other year — more like every three or four, at best. I’m not saying I agree with every decision that has been made. I think he squandered an opportunity to get Sanders some obviously much-needed game reps while maintaining his redshirt back in 2018.

Whether or not it always makes sense to us outsiders looking in, Gundy’s coaching philosophy includes a baked-in loyalty for whoever it is that has earned the QB1 position.

This can be frustrating at times and I believe we can, and sometimes should, be critical of those decisions when they don’t pan out. But there’s reason for it.

A significant investment of time and practice reps go into who is taking snaps. As easy as it is for us to view college football games like weekly fantasy games, a lineup change isn’t as simple as pulling out your phone.

Confidence and continuity are huge drivers of success. You want to guard those for as long as you can — until you can’t.

2. As Bad as They Look, Sanders’ TO Issues Are Fixable

Advanced statisticians will tell you that turnovers are mostly a result of luck — good or bad, dependent on which team you’re rooting for. I don’t buy into that completely because of what I can see with my eyes.

The majority of Sanders’ turnovers are a direct result of trying to force a ball into a tight window or not feeling pressure from his blindside, or not reacting quickly enough to it. It’s something that you commonly see with young quarterbacks, though we’re getting into the stage of Sanders’ career that they are becoming alarming.

But I can lay out the path for improvement with a recent OSU example.

Quarterback A is Sanders. QB B is Mason Rudolph, who would go on to have even more trouble holding onto the rock (small hands). I was surprised to see the similar TD-to-pick numbers. (For those curious, in those 13 starts Rudolph threw 426 passes compared to Sanders’ 317.)

Rudolph threw only one pick over his next three games to end 2015 (which was technically not in a start) and just four his entire junior season. He set the school record for interception avoidance for that season and for a career.

The point of this is to illustrate that while the turnover issues need to be fixed, there’s still a recent example of a young OSU passer overcoming early turnover issues. I don’t anticipate Sanders breaking Rudolph’s interception avoidance record but, again, there’s still time to improve.

3. The Potential Return on Investment

That time and coaching poured into a quarterback that I alluded to earlier represents a significant investment. And like any good CEO, Gundy has to weight it against potential returns. In this case, the potential returns are massive.

Sanders’ talent is undeniable. Some of the throws he makes are eye-popping and his ability to keep the defense honest with his legs is an advantage that won’t show up in any box score.

Speaking of box scores, let’s face it. If it weren’t for the wacky way that game ended and the L, we would be gushing about his career-high 400 yards and four TDs.

While Gundy has been building toward 2020 for years, he’s also currently building for 2021 and 2020. The opportunity to harness that talent and develop it over the next two-plus seasons offsets the potential drawback from making any type of reactionary change.

So that’s why, for now, Sanders will remain as Gundy’s guy. But his decision-making needs to improve and his turnovers need to decrease, and soon, while the rewards still outweigh the risks.