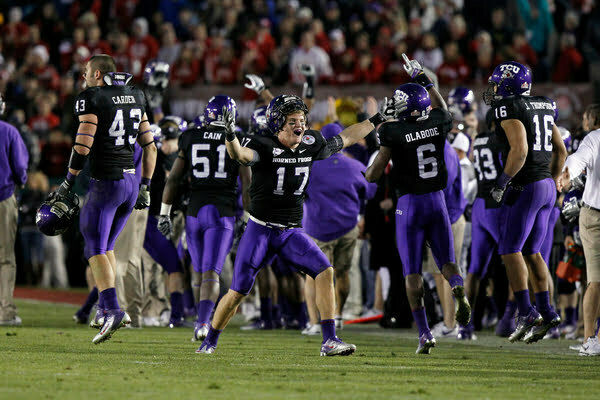 1. Here’s to adding another team south of Stillwater and BYU so OSU can move on up to a north division with Iowa State, Missouri, Kansas, Kansas State, and BYU and play for the Big 12 Championship every year.

2. Burns Hargis has now added one team for every four days he’s been on the job. At this pace A&M will be roped back in by Christmas!

3. Speaking of A&M, here are the last ten AP finishes for TCU and A&M:

So you tell me which conference (Big 12 or SEC) got the better end of that deal.

5. How bummed are TCU fans? You go from having to play UConn, Louisville, and South Florida as your conference games to having the Texas, OU, Oklahoma State gauntlet. I guess the upside is that you won’t need a layover to travel to away games.

So much of having a feared program like both schools currently have lies in building from the ground up.

Of the players listed on TCU’s website, 22 aren’t from Texas. A&M only has 13. It seems like your recruiting would get a little easier if you’re OSU because TCU looks out of state more and A&M’s opportunities in SEC country are opened up but the reality is that some of the three and four stars A&M was getting are probably going to go to TCU now…not to mention the new foothold held by Alabama, Georgia, LSU, Ole Miss…….you get the point.

I don’t really know what we’re rooting for here as OSU fans. Do we want to bring in bad football programs for us to beat up on or good ones to strengthen the conference? Do we want stronger basketball schools (because the Big 12 is already ridiculous in basketball) or do we even care how good a school is at basketball since the powers that be obviously don’t?

Trading A&M for TCU is like trading an iPad in for an iPad 2. Both are good programs but TCU has been on another level for the last decade.

A level that OSU can absolutely compete on but that will be much tougher than what would have been a non-conference opponent slot had the invitation not been extended. Adding TCU is conducive to having entertaining football, not as much for clear-cut paths to national titles.