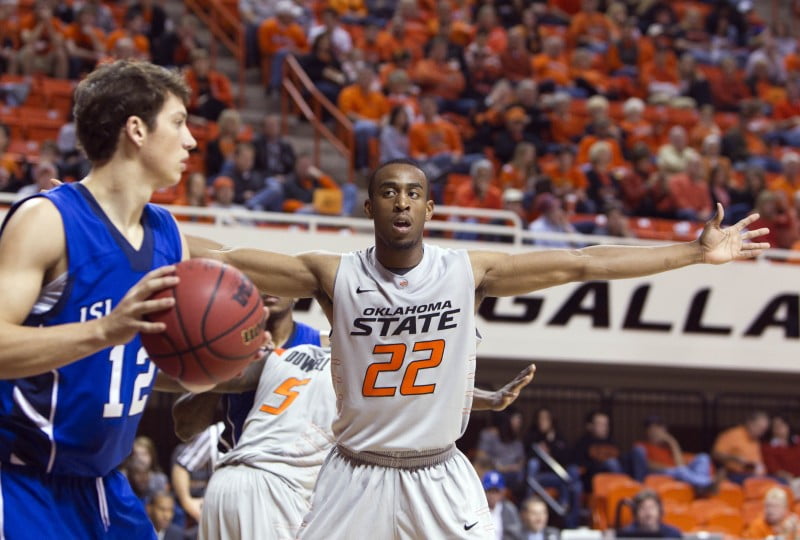 Positionless hoops is all the rage these days. You might not have heard it called that but I bet you’ve heard of the young man down in Miami ringleading his group of defending champs and shucking any sign of the five traditional basketball positions to the side[1. Simmons wrote briefly about it here and how it relates to Dutch soccer. Fascinating, I know.].

The Heat are attempting to provide a name for what they essentially did for six weeks of postseason play last year: give the ball to LeBron and get out of the way.

This works functionally for them because LeBron can’t stop doing LeBron things which means everyone else can be marginal and the Heat will roll. But it also works because they have exceptional athletes.

Here’s LeBron on what they do:

If we had conventional guys, we wouldn’t be able to have a position-less team

This type of game, positionless hoops, has really become air raid offense of basketball[2. Think about the air raid? Gone is the need for traditional wide receivers (and what is a tight end?!) — all you need is a quarterback who can fling it and a coach who can run it. It works not despite of, but because of its quirkiness.] — essentially gather the best athletes you can find and organize them into something coherent.

And I’m pretty sure OSU is about to see if it will work on the college basketball level.

The moment Travis Ford declared Marcus Smart the starter at point guard, whatever feeble inkling there was left that OSU was going to play a normal 1-5 lineup went out the door.

Bethlehem Shoals wrote beautifully about the positionless revolution five years ago in McSweeney’s. It was there that he penned this amazing bit:

Maybe only one or two players in the [NBA] are truly beyond positionality; this does not mean, however, that coaches cannot organize a team as if their entire roster were. Creative combinations and unorthodox dynamics require discarding the anonymity of the Old Basketball Order for a deeper, more personal understanding of a player’s capabilities. What matters most is not finding omnipotent individuals but most effectively distributing the finite resources of those available.

Basically, just throw your five best basketball players out there — no matter their height, weight, size, or strength — and let it ride.

And if you don’t think OSU is already doing this, you obviously haven’t seen the projected starting lineup tomorrow night:

Don’t look it up (because it will terrify you) but Nash is the biggest guy out of that group.

So it’s not a matter of “when will Ford institute the positionless revolution” but rather a question of whether or not that’s what we’re calling it.

On the Heat, everybody learns every position. Where to go on sets and what to do on inbounds plays. They understand not only what they’re supposed to do but intrinsically what everybody else is supposed to do as well.

It’s beautiful and it works. Partly because they have LeBron.

But OSU has its own version of LeBron (albeit a homeless man’s version) this year in Marcus Smart and he’s going be a matchup nightmare for Big 12 contenders.

Smart is built like an F-250 at 6’4 225 but quick enough that Ford considers him the best defender on the team.

Because of that, Ford should build around him. Let him and Nash go down low and bang a little bit — use those matchups (remember Nash is your biggest guy right now) to your advantage. Let them run and don’t worry about who brings it up (Markel, Nash, Smart, Forte, whoever) only that your plays and your team center around Smart and Nash.

This is what Ford should have been doing the last two years but instead he was too worried about trying to pigeonhole everybody to certain spots which is how we ended up with Keiton freaking Page dribbling the ball up the floor every game.

Ford also shouldn’t worry about rebounds because you weren’t going to rebound anyway (finite resources, remember) and instead just run teams down. Trap them, annoy them, out-athlete them with Nash, Markel, and Smart (these are the unconventional guys LeBron was talking about).

I feel like I write this same piece every year about Ford — I try to give legs to what he always says he’s going to do (run! have fun! fast breaks! tough D!) yet never follows through on{3. Side note here: Luke Winn wrote a great piece in this week’s Sports Illustrated about a Loyola-LSU game back in the early 90s and it talks about why coaches say they’re going to run and then don’t.].

This time there’s a model though, the best team in the NBA is doing the exact same thing. And while I don’t envision any banners hanging from Gallagher-Iba this time next year, I think Ford’s best shot at the tournament is opening things up, letting the Nash-Smart-Brown trio create off the dribble and hit open guys[4. When’s the last time we ran a successful set play anyway? 2007?], and then just praying something good happens on defense.

That’s what I’d do anyway.