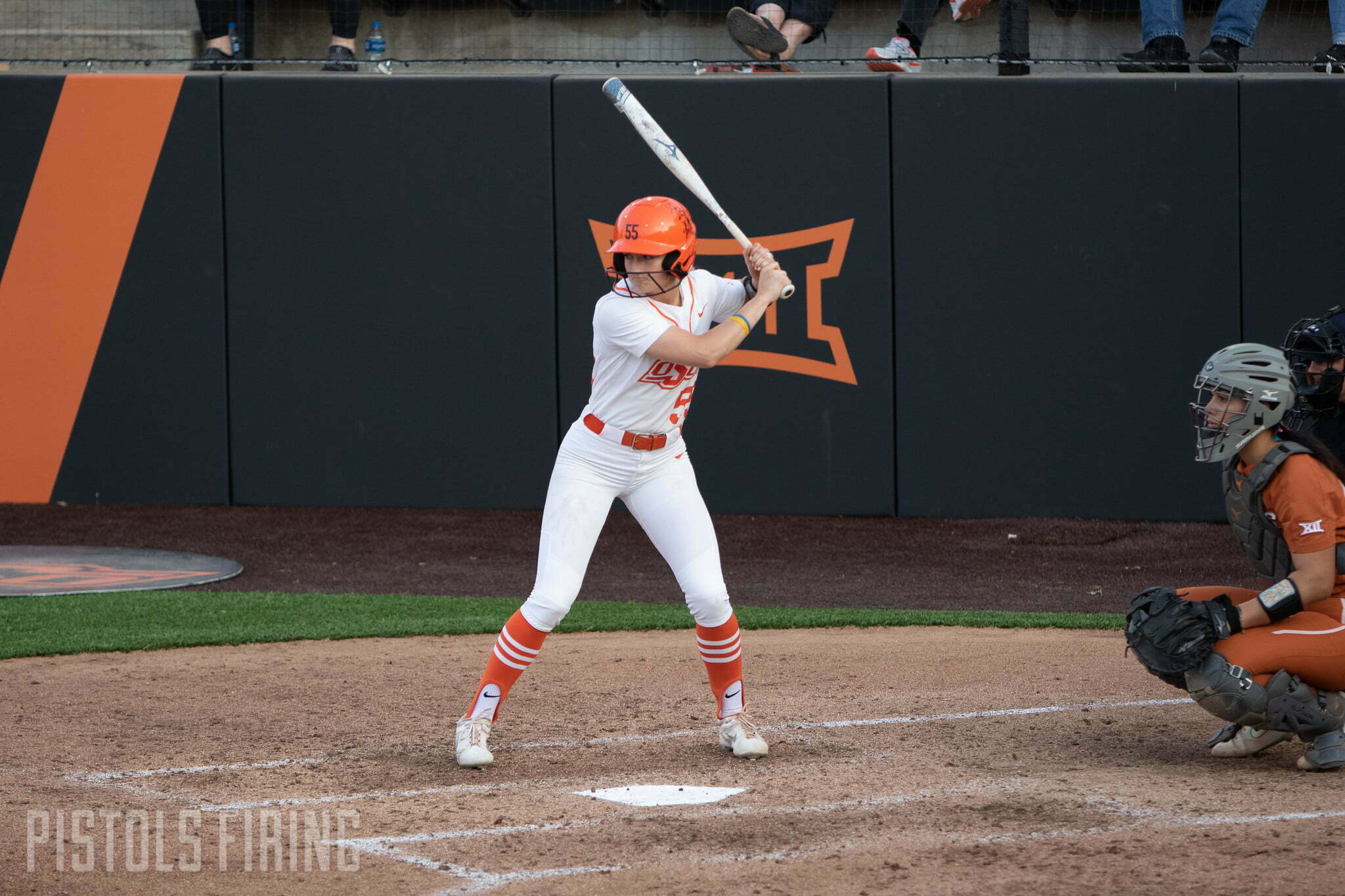 OKLAHOMA CITY — Media members looked down to type, the TV cameras cut away, but Chelsea Alexander was still playing softball.

Oklahoma State defeated Kansas 2-0 on Thursday afternoon in the first round of the Big 12 Tournament at USA Softball Hall of Fame Stadium. The Cowgirls had a tough time cracking the Jayhawks, but in the fifth inning, Chyenne Factor hit a sacrifice fly to right that scored Kiley Naomi from third.

Alexander also tagged up at second, and after Naomi crossed the plate and KU pitcher Kasey Hamilton and catcher Shelby Gayre exchanged the ball in front of the plate. Hamilton slowly started walking back to the circle, and Alexander pounced on the situation. With no one looking, Alexander dove head first across the plate like a stuntwoman, making it 2-0. It was allowed because Alexander stepped off the bag before KU was able to call time.

“As soon as I saw that pitcher turn her back, after they threw it back to her, that catcher also took her mitt off,” Alexander said. “She was kinda walking away, not paying attention to me, but as soon as she took that glove off, I just went because I was already inching toward home. That was kinda my green light to full send and take it.”

“… Half of [the other OSU players] were asking me what happened because they kinda turned their back on that play like a lot of people did. They thought it was over. “

The Cowgirls are the tournament’s second seed; Kansas is seventh. It’s the biggest gap among the first round matchups, but KU didn’t make it easy on OSU.

OSU has had some tough competition over recent weeks, but the Cowgirls haven’t scored more than three runs in a game since their 12-1 win against Tulsa on April 20. Cold bats were again a story Thursday. OSU struggled to punch a run across the board. The Cowgirls left the bases loaded in the second inning and left runners on the corners in the fourth. As a team, OSU finished the day 6-for-22 (.273) at the plate. Although the results might’ve not been there, OSU coach Kenny Gajewski said Thursday was a step forward.

“I actually thought we were better today [offensively],” Gajewski said. “(Hayley) Busby hit two balls really hard. They got caught. Chy hit that ball to short. Their shortstop made a nice play. We had some way better at-bats.”

But as long as OSU scored one run, that was going to be enough for Big 12 Co-Pitcher of the Year Kelly Maxwell. She threw her 15th complete game of the season and her eighth shutout. She allowed four hits while walking none and striking out nine.

She made things a little interesting late. Maxwell struck out Savanna DesRochers, but DesRochers reached base because, while she swung at the pitch, it got past OSU catcher Taylor Tuck. DesRochers was able to reach first safely. Maxwell then bonked Angela Price on the helmet with a pitch. Price spiked her bat into the ground and all a sudden the Jayhawks had two runners on and no outs.

A groundout moved KU’s tying runner into scoring position, but Maxwell finished the game with a strikeout before a game-ending line out.

“She pretty much dominated the whole game,” Gajewski said. “And I don’t think she was actually sharp here today. I know (pitching coach) John (Bargfeldt) was kinda irritated with a couple pitches that she left over the plate, which is not like her.”

The Cowgirls will return to Hall of Fame Stadium at 4 p.m. Friday and play the winner of Texas and Texas Tech, teams that are playing Thursday night.