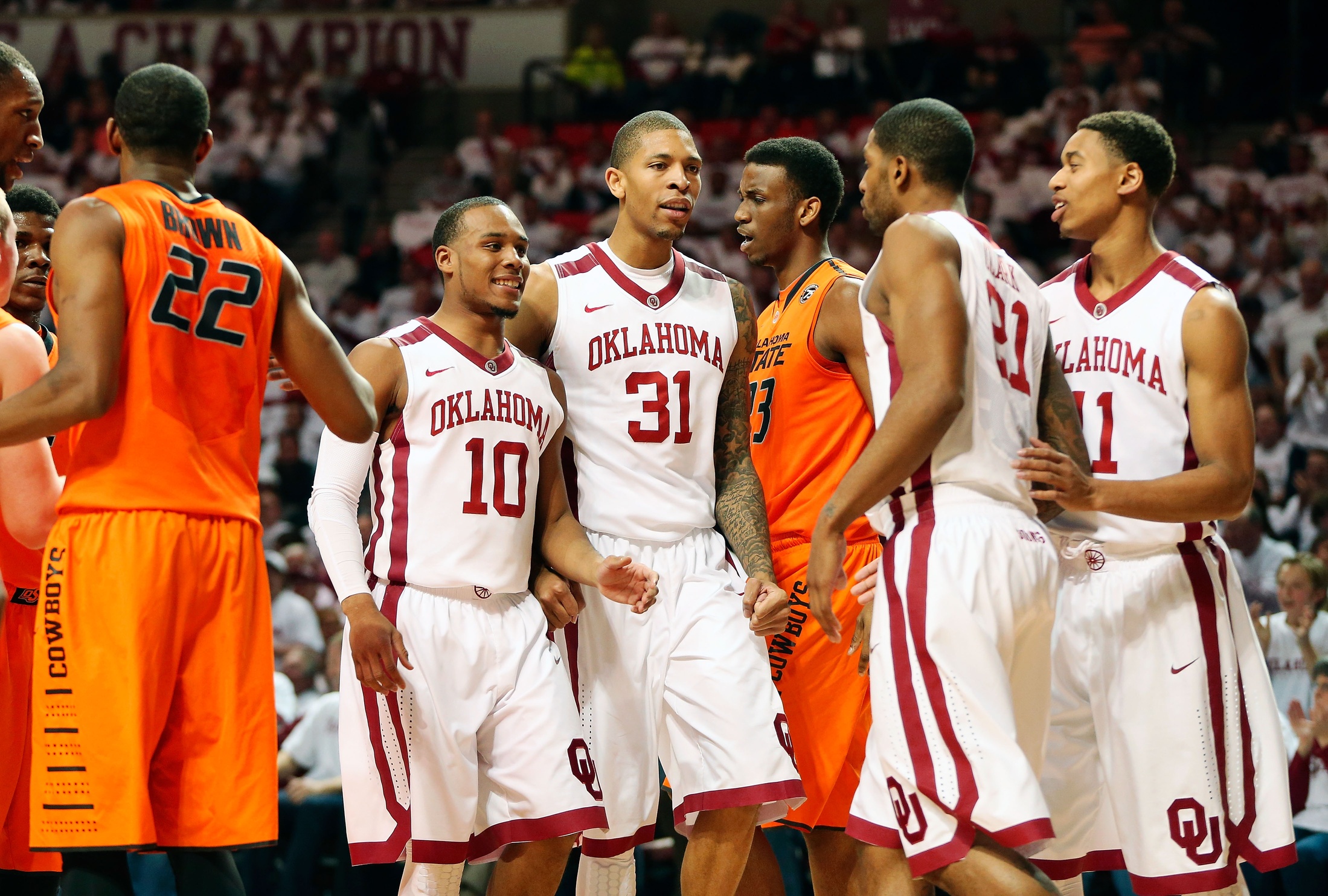 Ahhh yes, Travis Ford on the road in the Big 12. He’s now 12-34 in his career in conference games away from Gallagher-Iba Arena and 9-29 since his first year with the Pokes.

He’s coaching this year with, as Amilian pointed out, probably the best three-point shooter, most explosive playmaker, and best player in school history.

And he’s 1-3 on the road in conference games this year. Below his career winning percentage of .260. And he should probably be 0-4.

Something doesn’t add up.

And not just the numbers in the win column.

Oklahoma State got into foul trouble early in the first half with Marcus Smart and Le’Bryan Nash missing most of the first 20 minutes with two each.

I honestly don’t care if John Higgins or John Cena is refereeing the basketball game and in the same vein I don’t care if a foul is using a machete on somebody or breathing on somebody, you have to make an adjustment as a player, as a coach.

How many times am I going to type “Oklahoma State was taken out of its gameplan of trapping on defense and getting fast breaks because two of its three best players sat most of the first half due to foul trouble” during conference road games this year? All of them? 90% Somebody give me a number.

As much as I want to pin everything on Ford and send him on the first Barry Sanders Hyundai out of town, you can’t commit the kind of fouls Marcus Smart is committing and not expect some blame.

His second foul in the first half — the one that gave Leyton Hammonds and Christien Sager more minutes than they should be playing in an intrasquad game, much less a road game for a Final Four contender (“contender”) against the conference’s second-best team — was just ridiculous.

Tyler Neal — God bless him — pump faked under the bucket and Marcus jumped like he was in a leaping contest with Markel. Boom, foul No. 2, All-American misses the last 11 minutes of (probably) your last gasp at a Big 12 title (barring an ebola breakout in Lawrence).

You get down by eight or 10 at halftime and coming back on the road is like having to climb the mountain again and again and again. It just rarely happens.

There’s more to talk about, of course.

Like, is our offensive work in practice to put Markel on one end of the practice gym with a trampoline and Forte on the other with 400 balls and all the student managers and then just let everybody else chase Marcus around the big gym while he yells and shoots and does Marcus things?

Because that’s what it feels like half the time.

Sometimes I think we act like this team doesn’t have two All-Big 12 players, including a top 10 pick in the NBA Draft.

They get down and they panic and Marcus tries to hoist the entire state of Oklahoma on his back and Ford writhes and yells and nothing ever really happens.

I know that’s not actually what happens on the court and inside the huddle.

I mean, do we think OU is this much better than OSU? Look at this roster!

I mean that’s an OK team, but not a team that should be stroking a Cowboys team that has Marcus Smart and is favored by five points. I don’t care if they’re playing in Norman, Naples, or Billy Tubbs’ vacation home in Vail.

Give OU credit in the second half, though. I thought they went to the prevent offense too early but I forgot that Ryan Spangler was going to get every single offensive rebound he looked at. Plus they hit a lot of threes and made Lon Kruger look brilliant in the process.

And by “they hit a lot of threes” I mean “let me know when they revive Neal because I want to see the look on his face when they tell him he hit five of six shots and three threes in a Bedlam game.”

• This should (and probably will) be a post later on but I think Spangler is on my all-hate first team for OU. Najera and Griffin are team captains. Austin Johnson is up there, Cade Davis is on it. I’ll need some time to sort everything out but Spangler is in the conversation.

He balled tonight, though. I tweeted at somebody in my mentions before the game that he was probably going to have 20+ rebounds in the game and I was sort of joking but nearly right.

• Leyton Hammonds has zero clues right now but you can tell he’s going to be good. Like a middle class man’s freshman-year Markel.

• On a scale of 1 to the sun rising in the east tomorrow where does “white guy who averages six a game for OU will light OSU on fire in Bedlam” rank?

• I really like it when OSU and OU are top 25 team, doesn’t matter the sport. Better atmospheres, more on the line, the losses hurt worse. You can say you want OU to go 0-eternity but I disagree.

• When you can let OU go on a 12-0 run at home in Bedlam in the first half with your two most consistent scorers on the bench and not in foul trouble and not even look at them, well, you have to do it, right?

• Nash leads all basketball players in history in “fouls after the ball was stolen from him on the opponents’ end of the floor.”

• The craziest part about this dunk is that it doesn’t crack his all-time top five and probably not even his top 10.

• What page of the playbook is “Lleyton Hammonds shoots a three” on?

• The Markel left-handed finger roll is pretty spectacular. Embiid put it into the fourth row a couple of times but it plays against teams without 7’1″ Cameroonians.

• This is just incredible. Are we sure he can count to double digits?

• Part of what’s so demoralizing is that on paper this should be a pretty decent matchup for OSU. OU doesn’t have any monster guys down low like KU does and yet Spangler goes off for 17 rebounds (Nash and Murphy combined for 10) and OU rolls.

I thought OSU could have success in the tournament based on what kind of matchup it got but I’m not so sure anymore. Basically if you have a conscious human over 6’6″ who knows what an offensive rebound is, we’re kind of toast if Nash gets into foul trouble which is basically always.

• Markel threw the first half on his back with Nash and Smart out. This thing would have been over before the Thunder game if it wasn’t for him.

• Stevie Clark got some LOL calls tonight, three of them as bad as any I’ve seen all season. This one being the final one.

• The “get the guy in the air and throw it up even though you were trying to draw contact and nailing it anyway” three is the most Bedlam three ever for OU. Was it Cameron Clark? I don’t remember. I don’t want to remember.

• In the “had to change the gameplan because of foul trouble” files: OSU had to go to zone in the second half with, my gosh I cannot believe I’m about to type this, Christien Sager playing in the middle down low at times.

• Before you go bonkers, I have nothing against Christien Sager. I’m sure he’s a good dude and he’s a fine basketball player, but if he’s the answer then the question is not “is this a Final Four-worthy team?”

• I would have done things I’m not very proud of for Markel to posterize Spangler.

• How cool do you think Griffin thinks he is when he sees his own commercials on ESPN during OU games? I just imagine him sitting there, sipping a Sprite-Zima cocktail, hitting rewind on his DVR.

• Does Fraschilla still do the air guitar thing? Or is that over?

• Late in the game Smart and Sager were trying to grab boards over Spangler. That’s not going to get it done in March. Or any month, really.

• This is some circle of hell, I haven’t figured out which one just yet.

Spangler with the putback and 1, and Toby Keith slaps OU AD Joe Castiglione on the back of the head, apparently in celebration.

• I laughed out loud at this.

Anybody watchin' this basketbOMG TOBY!!!!!!!!

• To those calling for more shots from Forte. Meh, I think he’s 6/6 because he takes good, open shots. The extrapolation isn’t always there. Now do I need Smart hero-balling at the end of games? No, but I don’t know that letting Forte bomb away is the right call either.

We've had a "just-like-foot-ball" and a "lit-tle-bro-ther" chant in the last five minutes. I'm in hell.

• At least he recognizes it?

• Nash had four points, three boards, and took four shots. That’s partially his fault for getting into foul trouble but my gosh, feed him the ball. Who on OU is going to guard him?!

• I appreciated OU putting all 10 members of the plane crash on their video board by name. That’s great.

• OKC Dave only tweets 2-3 times at games he attends, but they’re always jewels.

• I think Nash thinks that having his hands straight in the air means that he didn’t commit a foul. Maybe it should be and maybe it shouldn’t be but how many times does it have to be called on him before he stops bumping people with his body with his hands in the air?

• While we’re here, I’ll say it every game if it’s warranted, but some of these fouls (on both teams) are just absurd. Golf watches college basketball and thinks the lack of contact is embarrassing.

• On the broadcast Holly Rowe said Ford was screaming at his team for playmakers in the second half at one point. This whole thing just feels like it’s going in the wrong direction.

• On that note, during the game I wrote this: “It’s almost like we expect to do stupid things. Or maybe I just expect us to.”

Our ideal game is where every player fouls out and it's just us on the court, capturing the hearts and minds of America.

#okstate commits the dumbest fouls. That is coaching.

Remember the 10 perspective, you guys.

And Baylor at home on Saturday. Goodness, I want to house Baylor.