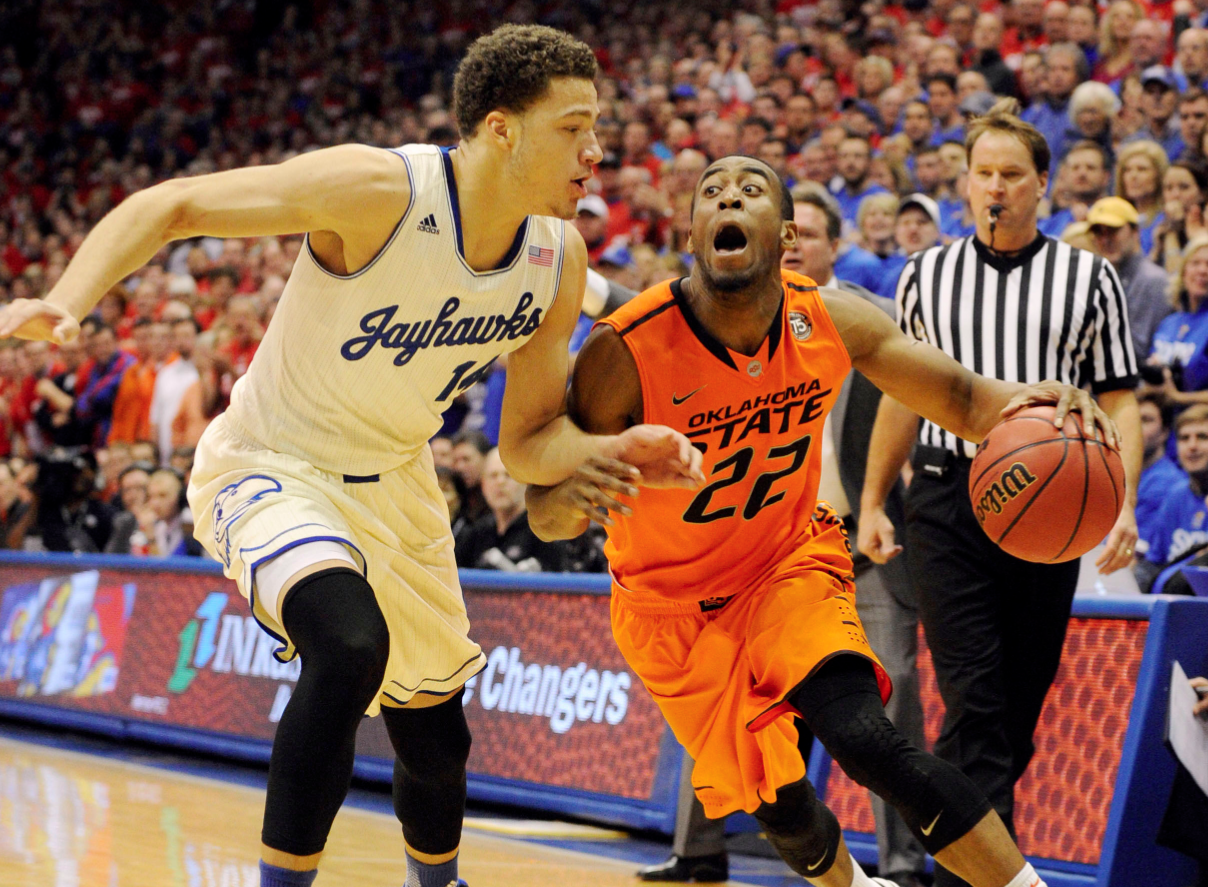 First of all let me say I’ve never been more lost during an OSU basketball game. From the pseudo fights to Twitter being totally out of control to that insane ending, I feel like I just shared a car ride back to Stillwater with Stevie.

So let’s start with the first half. That was as bad as this team’s poise has been over the last two years. I’m not talking about the technicals or the almost-fights or any of that garbage (most of that was silliness), I’m talking about what a joke the offense was.

Our plan on O was literally a “do we get bonus points for scoring as quickly as we can after KU makes a big play because that’s how we’re going to play for the first 20 minutes” blueprint. I don’t know if that’s a Smart thing or a Ford thing or an Allen Fieldhouse thing but, like OKC Dave said, it cost OSU the game.

People are going to talk about the officiating and no, it wasn’t good, but did you expect to get calls against KU in Lawrence? If so I have a 6’11 Czech to trade you for recruits to be named later.

College officiating in general is just horrendously bad — there’s no control over the game, they take stars out of it, it’s just not a good experience. It didn’t cost OSU the game, though. I refuse to blame this loss on that.

Now let’s talk about the second half.

That was as gutsy a rebound as I’ve ever seen from a Travis Ford-coached team. I knew they had one run in them but I didn’t know they had that second one at the end. When it was over, though it stung, it kind of felt as satisfying as a loss at KU can feel. You just went 26/66 from the field and committed 23 fouls and you were a three away from stealing the driver’s seat for the conference?

I was disappointed with the way Marcus handled the offense. He was 3/14 including 0/6 from three and often seems more concerned with drawing faux contact on his jumpers than actually hitting the jumper. He hit all 10 of his free throws but he has to play with more discipline than he did, especially in the first half.

So what do we make of the game overall? If Ford can somehow channel team No. 2 (that is, the second half team I watched) they can still win the Big 12. I really believe that. Their interior depth is an issue — always will be — but Marcus and Markel and (when he’s scorching) Forte can overwhelm teams.

I wrote this yesterday: There will be no 20-point demolition or stamped seal of approval from Phog Allen on this year’s Big 12 title race. If OSU loses, it will at least lose greatly. If OSU loses it will do so in such a way that says “this race isn’t even close to over…there’s a long way to go.”

That return affair in Stillwater is going to be as elite a game as you’re going to see in the next three years in GIA. I fully expect the conference title to be in play at that point.

I fully expect that despite a two-game deficit as of today that OSU will play itself back into the Big 12 race and give 13,611 a chance to seal the deal on March 1.

• I can’t tell you how pumped I got to hear Greg Gumbel say “Road to the Final Four” today on CBS. I’m all in on basketball season.

• How many meals in a row would Charlie give up to have Aaron Rodgers QB for the next four years? At least two or three, right?

• How awesome was Gottlieb’s response to Seth Davis making out with Andrew Wiggins’ AAU career in the pregame? “This ain’t AAU.”

• I didn’t take the time to look this up but I wonder how many times OSU has gone to Kansas as the higher ranked team. Can’t be very many.

• As highly rated as Allen Fieldhouse is, sometimes it feels like it’s underrated. That’s not a shot at GIA, I’m with Amilian in thinking GIA gets louder (though not as consistent), Lawrence is just such a special place. If you love college hoops you love that arena.

• How awesome was this?

Talked w/ a couple of KU fans before the game. They dont hate Smart for flopping or perceived arrogance — they DESPISE his flip.

• I don’t know that anybody mentioned it but you had potentially 16% of the 2014 first round on the court at the same time with Marcus, Markel, Embiid, Wiggins, and Seldon. That’s pretty awesome.

• I love that CBS includes the Gordon Hayward miss from the 2010 title game with Nantz’s call. It’s so awesome.

• How small is Joel Embiid’s jersey. He needs a 2X and wears a medium.

• Speaking of jerseys, those KU throwbacks are so elite. If OSU would have come out in the old cursives on orange I would not be typing this sentence right now.

• How many four-letter words did you say in your head when you saw that Markel-Lleyton-Soucek-Stevie-Forte lineup in the first half? If I would have told you in September those five would be rolling with KU in the first half at Lawrence, what would you have done?

• Guys, my Twitter feed, I don’t know how this hasn’t revealed itself by now, but I am very sarcastic. I’ve written about Oklahoma State extensively for each of the last 1,000+ days so if you legitimately thought I was going to turn off the Kansas-Oklahoma State game in Lawrence in the first half when OSU was getting smoked…? Get out of here, lighten up. Sports!

• Kamari was not good today. How many times in a row did Smart feed him underneath the bucket before he hit one of them? Smart needed one assist for a triple double and Kamari cost him about 18 of them.

• Speaking of Kamari, how not scared was KU of him? They constantly doubled Marcus/Markel/Nash in the lane at the expense of leaving Kamari by his lonesome. It worked.

• Every rebound is just an absolute war for us. That being said we only got out-rebounded 37-33. That’s so impressive considering Kansas has a future NBA all-star at center.

• Kansas was so lost on the press in the second half it was unbelievable. They had 19 turnovers (OSU had 11) and it felt like 17 of them came in the second half against OSU’s traps. Somebody on Twitter noted this but it was too bad OSU didn’t go to it earlier but Ford kind of had his hands tied when 292 fouls were called in the first four minutes.

• Markel’s technical? He had to have said something we didn’t see, right? OKC Dave mentioned this but based on Marcus’ reaction I would think Markel said the magic word. I never saw it, though.

• Two calls loom rather large: The goaltend THROUGH THE NET in the first half and Black stepping on the line. Maybe OSU wins maybe it doesn’t, but those are pretty awful.

• The double foul at the end of the game was incredible. “We have no clue, you, yeah you in the front row, you play for the Packers, right? You make the call here.” Aaron Rodgers: “Double foul!” Refs: “Let’s do it!”

• Marcus and Markel combined to go 8/27. That’s not going to cut it against Kansas though some of Markel’s second-half threes felt like they were worth five or six points.

• I thought this was kind of funny..

Pretty much sums up today – pic.twitter.com/XlHF1bzArw

• This got lost but it was pretty awesome.

• I saw a commercial of Arnold Schwarzenegger playing ping pong. Is there some sort of contract the Big 12 has with the sport of ping pong?

• This was at the end of the game when the refs gave KU a ball that was clearly out on KU. Travis Ford talked them into reviwing it on the monitor. They didn’t know what to do.

The thought to look at the monitor didn’t even cross their minds.

• Speaking of things I’m not feeling. Why is there such a disparity in what is called in the backcourt vs. what’s called under the bucket? It feels like those two need to meet in the middle.

West Virginia at home next Saturday.