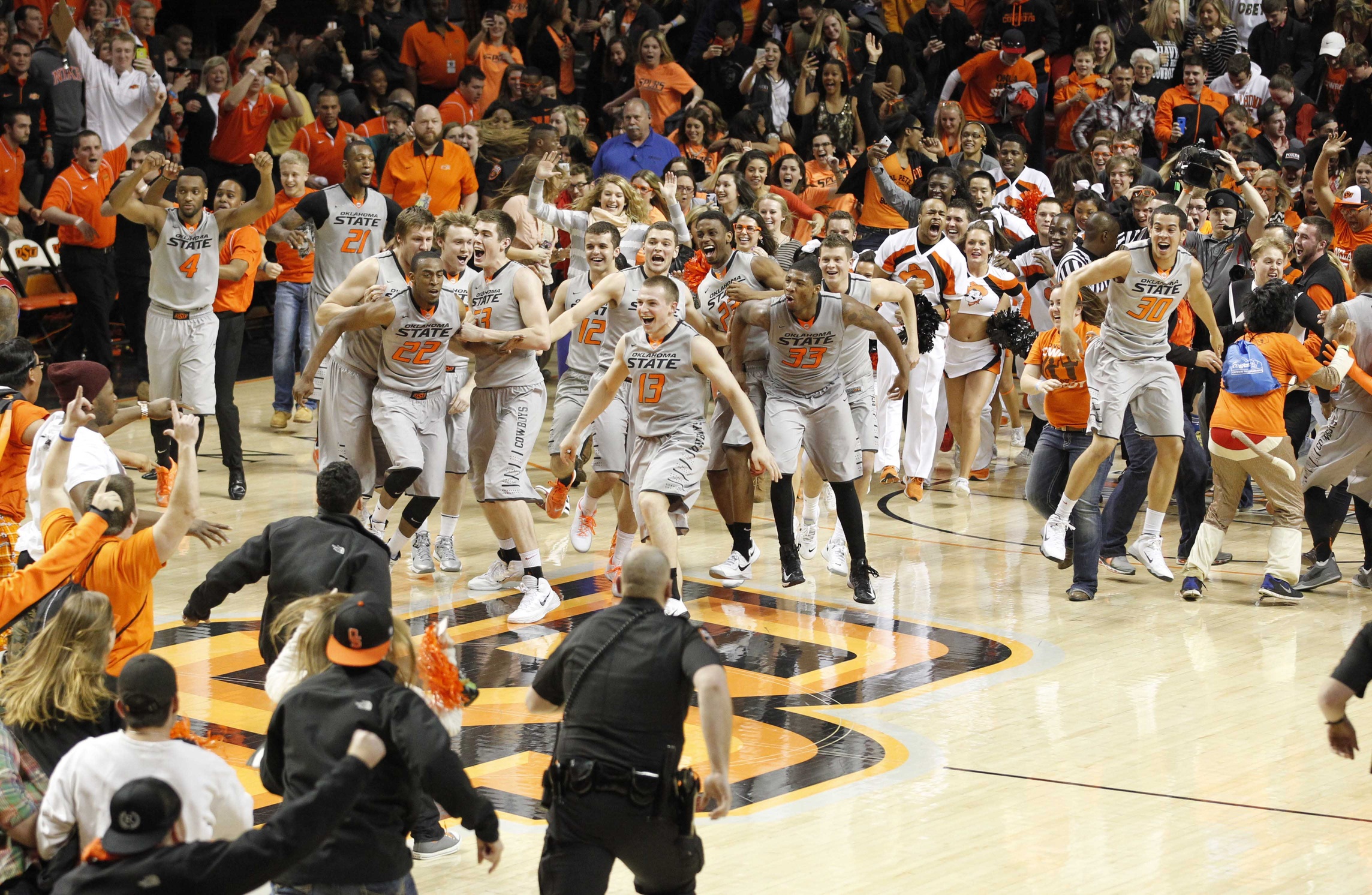 I picked a good one.

My first game in GIA this year[1. I’m the worst, I know.] yielded a pretty sweet ending after a pretty stellar outing.

The Pokes would close with a classic 30-13 run to end the game, though, which delivered a 72-65 victory — the biggest margin of victory of any of the last four OSU-Kansas games in the last two years.

26 of those 30 came from from Le’Bryan, Marcus and Markel who were all equally spectacular. They stayed in their respective lanes, did Le’Bryan/Marcus/Markel stuff and hand-wrapped the best moment of the 2014 season to a packed house that included half the OKC Thunder organization (I think).

The Big Three took over with bucket after bucket (OSU was 64 percent from the field in the second half!) and a pretty great defense forced 22 Kansas turnovers en route to its seventh conference win of the season. Marcus hit Markel with a filthy alley-oop (see below) with 9:33 left and OSU never looked back.

Oh, and GIA, did I mention how immense GIA was. Smart was showing his biceps off all over the white maple at the end but it was GIA that flexed her muscles late in that wonderful way she has a habit of doing.

It hasn’t been the prettiest of seasons but she was awakened, if only for one night, as a reminder of what this place, and I think ultimately what this team, can be.

• This was just unbelievable. (via Todd Arms)

• Did anyone else see Cobbins’ sweater. It should be in an art museum. We could auction that thing off on PFB for $500, easy.

• I’m not even going to comment on the Smart flops anymore. There’s no point. Seth can do it:

Marcus Smart is actually getting worse at flopping. I did not think that was possible.

Oh my. RT @KellyHinesTW: AD Mike Holder wearing the orange glasses handed out to fans cracks me up. #okstate pic.twitter.com/3GgmqbxckF

• The best response to a tweet I had about Westbrook and Big Country sitting in the same row at the game was this: “they’re probably trading fashion tips.” I DIED.

• Speaking of the Thunder being there and sitting on the floor (Scotty was in Boone’s seats, by the way) did you notice the hierarchy of floor seating? Brooks > Country > KD. Respect for that ’95 Final Four team.

Bill Self told #Kansas equip mgrs on #Big12 trophy, shirts, hats to "put em under the damn bus, we lost our chance to celebrate" @KUHoops

* Dave Hunziker said Markel is one of only three guys in the last nine years with four games of 20+ against KU (Jacob Pullen and J’Covan Brown). That’s big boy stuff. I love Markel, by the way, I think that’s well-documented but he’s just emptied his tank this season. All of the respect from me.

• GIA was so, so good tonight. I’m not too into ranking the loudness of different years or whatever but I can’t imagine it being much louder ever than it was at times tonight.

The one thing I’ll say about it, though, is that there wasn’t that buzz-y feeling you got when conference titles were on the line. There wasn’t that electricity wafting around the arena for the entirety of the game.

That’s fine, of course, because this was a 6-9 team coming in, but it seemed like the only difference between tonight and GIA at its apex.

• Marcus said after the game that “OSU is back.” I think he might be right — this seems like a team poised for a streak into the tournament — but maybe we should get to .500 in conference before declaring that?

• This was so awesome.

• I don’t need Smart giving me a gun show all over the court while the game is going on. I know he’s excited but Markel and Forte and Kamari are too and they don’t flex at KU’s bench and have to have Ford grab them by the jersey to yank them into the huddle at the end of the game (this all happened, it was nuts).

• One of my buddies, I thought this was really interesting:

Guy next to me is scouting the Kansas starting 5 and everyone on OSU’s starting 5 except for Murphy. Yes, Forte included.

He’s not the only one, by the way. All is forgiven when you take down KU but seven threes from Marcus is just silliness. He went 2/7 from three and his conference percentage went up. If you’re not good at math I’ll save you the time….that’a bad.

• Not out of the question!

@pistolsguy you ever think bill self loses in Stillwater on purpose to secure Travis ford's mediocrity for the next couple years?

• A lot of people seem to have opinions of court stormings. I don’t care that much, I suppose. That is, I think it’s a fine thing — though not a thing to strive for. Top 10 teams don’t storm courts but we aren’t a top 10 team even though we were (and maybe should be?) so that’s a strange dynamic. I don’t know what to do with that so I guess I’m fine with it.

Amilian and I were talking after the game, though. It seems like we’ve had a court storming ever year Ford has been there. We definitely have the last three years. Is that good or bad? I don’t know but it seems like there should be an expiration date on it.

Besides that, the storming itself was pretty impressive. If you do it, do it like this:


• I thought Ford’s rotation in the first half was superb. He worked in nine (!) guys and saved everybody’s legs for the second half. Great, great work from somebody who doesn’t get much praise from me.

• One thing I loathe about the end of games is when refs change the way they’ve been calling it throughout. There were about six just ridiculous calls in the last three minutes (on both sides). That’s awful.

• It’s hard to describe how freaky Joel Embiid is in person. I’m 6’1 and I’ve stood next to Mason Cox and he makes me look like a child. And Embiid makes him look silly. It’s incredible. Speaking of Mason and Embiid, how about my boy bodying up the No. 1 pick in the first half?! Minutes!

• And speaking of that, if we could get a Phil Cox (Mason’s dad) cam at games I would pay a monthly fee to tune in.

His reaction when Embiid went over the back in the second half on Mason was like something out of one of those Jimmy Kimmel kid videos where the parents either surprise them or scare them or whatever they do to them to get on national television. No lie, I’d pay $50 for video of it.

• Wiggins travels more than Nash. And that’s a lot.

"I don't know if you follow it, but Markel Brown is a Jayhawk killer." – Bill Self #okstate

• I give Smart a lot of crap as well but he closed like a baller tonight. You always get props from me for that. Get that man some Starbucks.

• If you would have told me before the game we would have hit five threes, I would have LOLd and put all of my family’s money on Kansas +1.[1. Kansas +1? Vegas, baby.]

• One final mention about GIA. It’s hard to overstate how good it was tonight. Ear splitting. Amilian told me afterwards he was screaming at me at times during the second half to see if he could get my attention and he said I never even moved. It was spectacular.

• Today was the first day of March. That’s not a coincidence, right?

Kansas State on Monday. I’ll be there again.