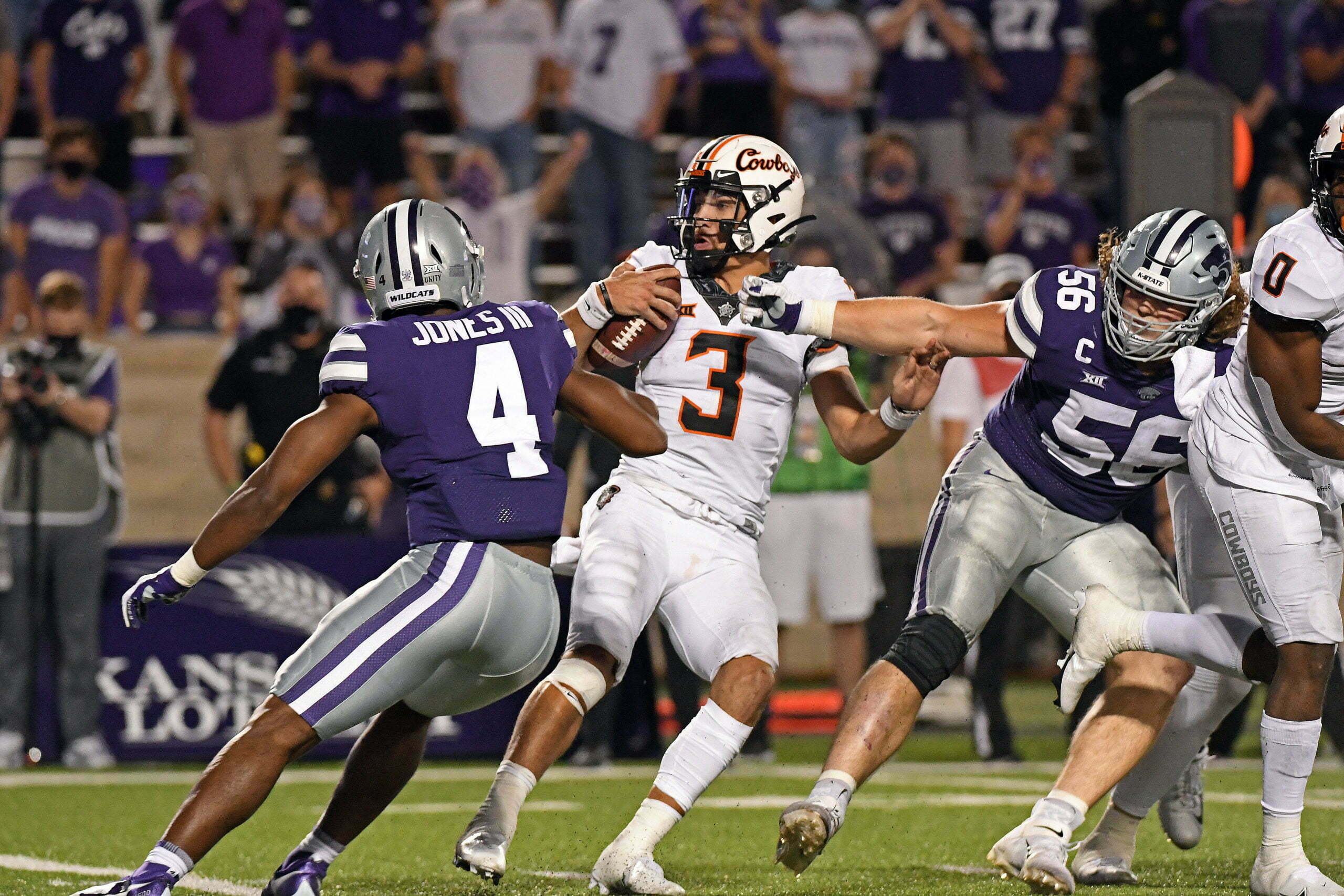 A Cowboys’ game in 2020 (or seemingly anytime, can’t just go quietly into the night without causing some cardiac unrest.

Oklahoma State beat Kansas State 20-18 on Saturday in Manhattan. The Pokes had to come back from a 12-point halftime deficit after looking like the 2014 Cowboys in the first two quarters. But like they have four other times this season, the Pokes found a way. Here are 10 thoughts from the game.

1. Defense Does It Again

Oklahoma State is a defensive football team with a defense that somehow ups itself week after week.

Jim Knowles’ bunch forced two fourth-quarter turnovers, one of which quickly turned into what went on to be the game-winning score when Jason Taylor housed an Israel Antwine forced fumble 85 yards.

In a first half where OSU’s offense provided 83 total yards of offense and 242 yards of Tom Hutton punts, the Cowboys’ D, without an injured Kolby Harvell-Peel, held the Wildcats to 12 points.

K-State finished the game with 370 yards of total offense, two turnovers and 8-of-18 on third down (all kind of high for this defense’s standards). But most importantly, this group held a team under 20 points for the fifth time this season.

OSU started this game as so:

Dylan Galloway was an expected started for the group, but he retired during the offseason because of injury.

The unit lost Bryce Bray and Jacob Farrell after they violated team rules and transferred away in the preseason.

Cole Birmingham and Hunter Anthony got hurt early in the Tulsa game and haven’t been back since.

Jenkins even had to take a few plays off Saturday, and when he did his replacement, Taylor Miterko, got rolled up on and hobbled off the field.

These are some of the craziest scenarios an offensive line has had to go through. It’s all the more unfortunate that OSU has as good a team as it does, but perhaps the most important group to the team’s success can’t squash the injury bug.

Nursing a 1-point lead in the fourth quarter, Mike Gundy and Co. were faced with a decision.

It was 4th-and-1 on K-State’s 45-yard line, and Gundy elected to punt instead of getting aggressive.

Twitter was ticked with the sentiment OSU wasn’t playing to win, but I see the decision both ways.

Pros for Punting: Gives K-State a long field against OSU’s tough defense, takes responsibility off banged up offensive line and running backs, scoring a touchdown likely still makes it only a one-score game with OSU just being up 8.

Pros for Going for It: OSU’s offense was looking much better in second half, gives chance to chew more clock, potentially makes it to where K-State needs more than a field goal.

Hindsight almost made the call look terrible. K-State got a quick 58-yard gain on the next play, but then Antwine forced the fumble and Taylor ran it back.

It’s a lukewarm take to say I see both sides of it, but maybe the world needs a little more lukewarm right now, I don’t know.

Kasey Dunn’s approval rating when he was promoted to offensive coordinator was as high as an OSU OC has had since pre-Mike Yurcich.

OSU didn’t score and had 83 total yards in the first half, and some were voicing displeasures. Were they fair critiques? Maybe, but you could argue moving the ball with that banged up of an O-line would’ve been difficult even for Todd Monken or Dana Holgorsen.

Then OSU came out in the second half and started using freshman receiver Brennan Presley in an H-back-type roll. Presley was constantly in motion, and OSU was finally about to move the ball.

I’m sure we’ll have Dustin Ragusa dive into what made OSU’s offense move in the second half next week, but even I can read numbers.

Presley scored his first (and OSU’s only offensive) touchdown Saturday off a 9-yard jet sweep.

Dunn was using Presley in all sorts of ways Saturday. Was it because Tylan Wallace was out? Did someone on OSU’s staff tune into ESPN and watch Braylin Presley dominate Booker T. on Thursday? Who knows, but it was great to see him used as well as he was.

He didn’t have a catch, but he was on the field and a part of the action for than he has been all season. Also, OSU needs to offer his brother.

OSU’s pregame radio show listed LD Brown among guys who weren’t going to be able to play Saturday because of injury, but luckily for the Pokes, he did.

The radio broadcast said Chuba Hubbard was dealing with an ankle injury this week in practice. He gave it a go, but had to hobble off the field a few times. He finished with six carries and 31 yards.

Meanwhile Brown, who again apparently wasn’t supposed to play, had 15 carries for 110 yards. He even hobbled off at times, meaning Dezmon Jackson also got his first two carries since the Kansas game.

OSU really needs this bye week with all the injuries.

7. Tylan Wallace Is a Gamer

Nursing a muscle tweak, Tylan Wallace had to stand on the sideline without a helmet and watch all of Saturday’s game … except for one play.

A future NFL receiver, a former Biletnikoff finalist, Wallace got to sniff the field for just a moment Saturday, but of course he made a big play.

When the Wildcats scored to make it 20-18, they came out for an onside kick, and the All-American receiver came out of the hands team. The ball took some funky bounces, but Wallace made a heads up play and knocked the pigskin out of bounds.

Receivers have a stereotype of being emotional me-guys. Wallace isn’t that.

For the first time this season, Spencer Sanders didn’t turn the ball over.

There were a couple of close calls, but the Pokes went turnoverless nonetheless. Sanders didn’t look 100 percent and looks like another guy who will welcome the open week.

Sanders’ numbers weren’t outstanding by any means, and there was still a rumbling for Shane Illingworth. But, Sanders’ 14-for-23 and 108 passing yards were enough to get the Cowboys back in the win column.

9. K-State Is Going to Be Good

From the outside looking in, his style of grind-it-out football was the perfect follow-up to to Bill Snyder’s reign.

With a true freshman quarterback and a true freshman running back, the Wildcats are hanging with good Big 12 teams. In 2022, Big 12 teams are going to be sick of seeing Will Howard and Deuce Vaughn running down fields in Kansas, Oklahoma, Texas, Iowa and West Virginia.

It’s one of the few times in a sport where teams are seemingly always in win-now mode that you can see the building blocks of a program on the rise.

The Cowboys’ Big 12 title hopes remain alive and are on the line in Norman.

Bedlam is always a high-stress time for OSU fans, but the stakes for Nov. 21’s game in Norman might make this the most stressful game since the Rudolph/Mayfield shootout in Stillwater.

Both teams (likely) need this game to make it to Arlington. Both have shown flashes of excellence this season, and both have proven they can also stink.

As heart-pounding as Saturday’s fourth quarter was, the anticipation the next two weeks provide leading into an all-important Bedlam matchup is going to be nuts.