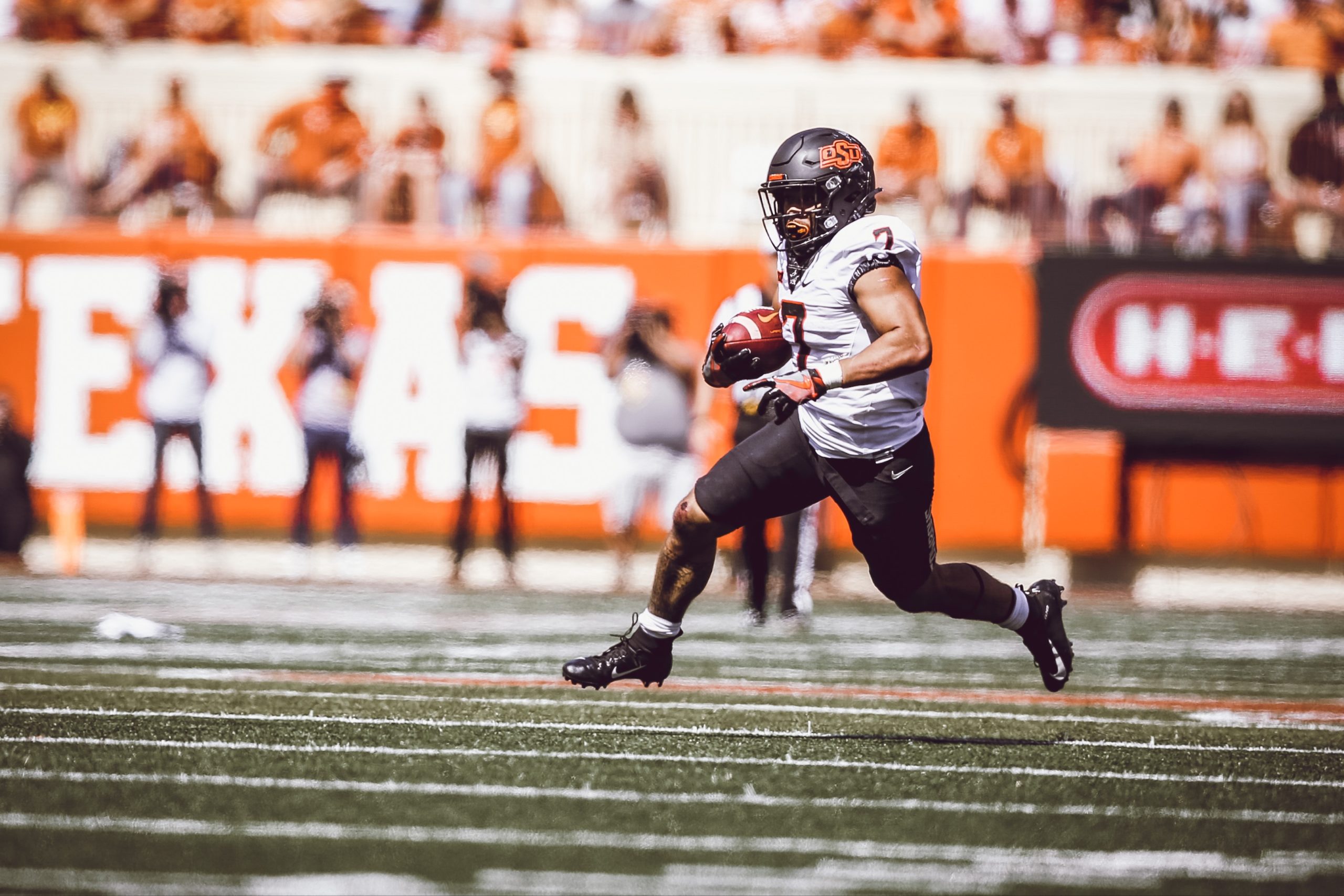 AUSTIN, Texas — There might not be a better combination in the country than Jaylen Warren and this OSU defense.

1. Pokes Find Another Way to Win

Whether it’s going down 20-7 in Boise or losing the turnover battler three to zip against Baylor or nearly getting ran out of Austin in the first half, the Cowboys have oft found themselves in undesirable positions this season. But they are just winners.

Spencer Sanders threw an INT with OSU down 17-3. That should’ve been it. The media should’ve started writing game stories, and fans in Stillwater should’ve flipped the channel. But not with these Cowboys.

A common thread over the past few weeks was that OSU couldn’t do hardly anything offensively in the second half of games. Well, Saturday the offense was anemic in the first half, trailing 225-156 in total offense. And Kasey Dunn’s group mustered only a field goal (OSU’s defense scored a touchdown, though).

Then things came alive in the fourth quarter, as the Pokes outgained the high-octane Longhorns 170-1. One hundred seventy to one.

There is something about this group that is hard to pin down. It’s far from the flashiest team OSU has ever fielded, but week after week, the Cowboys just keep finding a way to win.

Going back to the fact that OSU’s defense held Texas’ offense to 1 fourth-quarter yard, Jim Knowles deserves every amount of praise imaginable.

The Broyles Award is given out annually to the top assistant coach in college football, and Jim Knowles should get it. Funnily enough, Steve Sarkisian got it last year.

Knowles came to a place where the thought of defense was scoffed at. The Big 12 was an offense league, and OSU was one of the major players that gave it that stereotype.

It stopped the high-potent UT offense on a crucial 3rd-and-1 in the fourth quarter. Then It stopped them again on the ensuing 4th-and-3.

Then to ice things, the group got another turnover when Tanner McCalister intercepted a pass.

Bijan Robinson was as advertised. He ran for 135 yards and two touchdowns. He had another 38 receiving yards to go with another touchdown. But Jaylen Warren was just as good.

The Utah State transfer RB got a well deserved bye week after having 95 rushing attempts in OSU’s previous three games. Then Saturday in front of the biggest crowd he has played for, Warren had 193 yards and another 33 carries.

He looked like Super Mario, jumping over Goombas, turning on a dime and never getting tired. He had 118 yards in the fourth quarter alone, including runs of 27, 20 and 29 yards.

The 20-yarder came at what could’ve been a lull for OSU’s offense. The Cowboys had just ran two trick plays, one of which worked and the other didn’t. Then Warren proved the Pokes didn’t need to be too sneaky to move the ball, cutting to the outside and setting up Tanner Brown’s go-ahead field goal.

Then with OSU needing to drain clock, Warren cut back all the way across the field in his 29-yard scamper like a deer through a forest.

Warren was supposed to contribute this season, but in a by-committee backfield. He has been the surprise of the year for the Pokes, and Saturday he proved he is as good as the best back in the league.

For as often as Jason Taylor scores, you’d think he plays offense.

After the Sanders INT, it looked as if OSU was about to go down 24-3 in the first quarter before Taylor, a redshirt junior safety, darted in front of a Casey Thompson pass and sprinted it back 85 yards for a touchdown.

“Coach (Jim) Knowles always puts us in position to make plays,” Taylor said. “I kind of saw him eyeing it, my zone. On the snap, I waited, baited him to throw it, and I jumped it.”

It’s was his third career TD after scoring on a fumble recovery and onside kick recovery last season. He also had a pick-six against Tulsa that was called back because of a holding call.

In the past two seasons, Taylor has more touchdowns than Tay Martin. He is one behind LD Brown. That’s not a knock on either of those guys, just something that shows how remarkable Taylor’s knack for big plays is.

When OSU’s offense was floundering in the first half, the social media portion of OSU’s fan bases was none too pleased with QB1, but Sanders kept shrugging things off and was a cog in the Cowboy comeback.

He wasn’t the first star or even the second, but he made enough plays down the stretch to be QB1 for an undefeated team.

In OSU’s first drive of the fourth quarter, Sanders had two passes to Brennan Presley for 21 yards and a touchdown. Sanders also ran for 22 yards on that drive.

Later in the quarter, he scored a 10-yard touchdown run (though Texas wanted him to score to get the ball back).

It’s not the way Mason Rudolph led his teams, nor is it like Brandon Weeden. Shoot, it might not even be like Zac Robinson or Clint Chelf, but Sanders has done enough to be 6-0.

Martin had a pair of first-quarter drops that certainly could’ve helped the struggling offense’s cause — both were tough plays to make, though.

The first was on OSU’s first play from scrimmage when Martin got some separation on a double move. He had to dive for the would-be catch that popped away from him as he fell to the turf.

The second drop came on 3rd-and-goal from the 4-yard line. Sanders threw a fade route to Martin in the corner of the end zone. It might have been Sanders’ best ball of the day. It hit both of Martin’s hands, but he couldn’t get ahold of it. OSU settled for a field goal.

Martin finished with six catches on 12 targets for 48 yards.

Martin has been Sanders’ most reliable target this season, but something was just off Saturday.

Mike Gundy said he put Alex Hale on the driving range for him to work out his inaccuracies over the bye week, but it appears Tanner Brown is now on tour.

Brown was 4-for-4 on field goal attempts Saturday, including the go-ahead score in the fourth quarter.

“He’s been really good,” OSU coach Mike Gundy said. “So, as of now, his times are good. His elevation has been good. At the end there when he’s trying to kick for the lead, there’s a lot of pressure, and he’s executed so far.

“… Moving forward, he would be the guy based on the success he’s had to this point.”

8. Setting Up the Reverse

The Cowboys ran a speed option a handful of times Saturday that they haven’t shown too much this season.

Then in the fourth quarter, Kasey Dunn gave that look with Brennan Presley running in the opposite direction. The reverse gained 17 yards and set up the Cowboys’ go-ahead score.

The first half wasn’t all that kind to Dunn, as with Sanders, but that was cool wrinkle to a play that had limited success throughout the game. It came at the perfect time.

“You want to set that up and tee it up,” Dunn said. “We ran option a couple weeks ago. It’s a natural play that comes off of that option. … We didn’t necessarily run the option play all that much to set up that play, as much as we were just hanging our hat on the option.”

In his past seven trips to the Texas capital, Mike Gundy is 6-1.

Texas coaches have changed, players have changed, but his success in front of 100,000 burnt orange fans has stayed the same. It’s a win that means a lot to OSU’s fan base because every school likes beating high-and-mighty UT. As good as anybody, Gundy has done an outstanding job of developing his three stars (and a handful of four stars) and going to DRK-Texas Memorial and beating blue-blooded Texas.

Despite all of the success OSU has had over recent years, the Cowboys haven’t been to Arlington since the Big 12 Championship game was brought back in 2017.

The Pokes have started the conference season 3-0 and just took the head-to-head against a major competitor. They’ll get a shot to deliver a blow to Iowa State next week. If the Cowboys can win there, who else is there? OU and maybe TCU?

The Cowboys just need to be in the Top 2 to get to Jerry World.