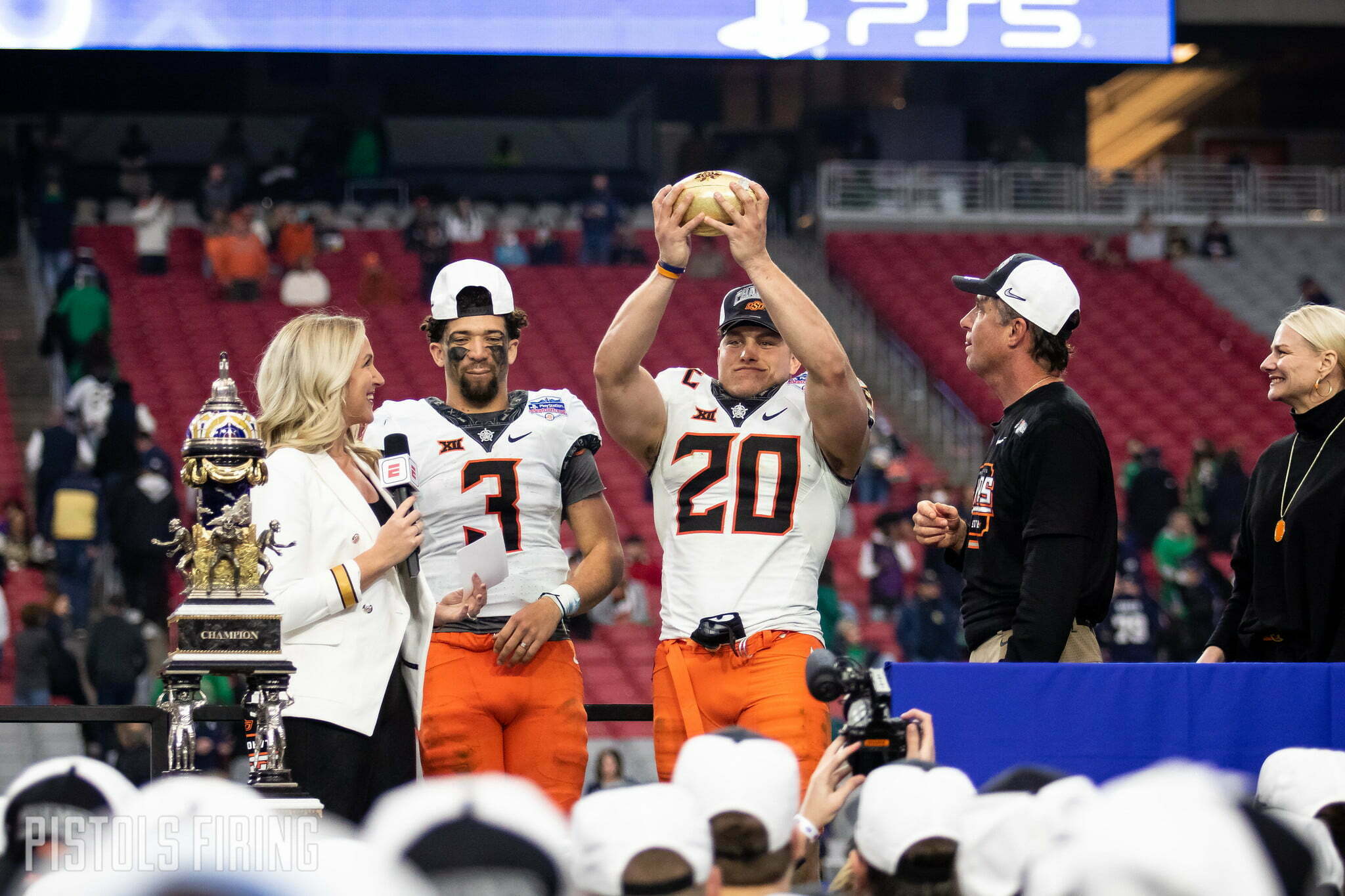 GLENDALE, Arizona — Ten years from their last trip to the Fiesta Bowl, the Cowboys are champions again.

Oklahoma State defeated Notre Dame 37-35 on Saturday in State Farm Stadium in a game the Cowboys once trailed 28-7. Here are 10 thoughts from an excellent game.

1. The Comeback of All Comebacks

The Cowboys were down 21 points, the reliable defense was faltering and they weren’t moving the ball on offense — then a flip got switched.

After trailing 28-7 with 1:16 left in the first half, the Cowboys’ comeback was a program record. There was some rare air where it all came together. The Pokes’ offense looked like the offense of the past, flying up and down the field while the defense was as stingy as it has been all season. Some sort of OSU nirvana was reached, and it came in what Mike Gundy called the biggest win in program history. It came against Notre freaking Dame in the Fiesta Bowl.

“This is clearly the biggest win in history of the school,” Gundy said. “You’re in a New Year’s Day bowl. You’re two Top 10 teams, No. 5 team in the country. You’re playing Notre Dame. Biggest comeback in school history, I think somebody said, down 21 points in the Fiesta Bowl. Biggest win in the history of school.”

Mike Gundy and Kasey Dunn were forced to go to the old, reliable up-tempo offense, and Spencer Sanders looked as good as ever.

Coming off a four-interception Big 12 championship, the All-Big 12 First Team quarterback went 34-for-51 for 371 yards and four touchdowns while running for another 125 yards. It’s his third 100-yard rushing performance of his career.

When the Cowboys planted their foot on the gas, Sanders had Notre Dame on its heels and delivered excellent ball after excellent ball, and he worked well in coordination with Jaylen Warren in the run game. With both guys a threat, the Irish had little chance making a right decision on whom to pursue.

The microcosm of the entire game was the Cowboys’ final drive of the first half. With 1:16 on the clock, there was a wonder if OSU would elect to get into the locker room or get aggressive. New year, new Pokes, they got aggressive and scored in 37 seconds.

“I’ll be real honest with you, I didn’t have much confidence in us going down and scoring in four plays,” Gundy said. “My concern was taking a sack because we hadn’t protected very good up to that point or Spencer not being patient and firing the ball into coverage and trying to make a play. Quarterbacks do that when they get impatient. But he did a great job of understanding it’s one play at a time.”

I’m not sure there was one ball Sanders threw that caused the OSU fanbase to collectively hold its breath because it should’ve been intercepted.

Continuing the Sanders love, here is his combined bowl game stat line for the two bowls he has started:

It looks even better with the fact that he has done it against two nationally recognized programs: Miami and Notre Dame.

Sanders’ career to this point has been up and down, yes, but Saturday was another shining example of what he can be. And he can be a dang good college quarterback.

A hallmark of the Jim Knowles era was aggressive man-to-man defense. Knowles mixed in a little more zone this season, but at points in Saturday’s first half, whichever coach was calling defensive plays reverted to the soft coverages of years’ past, and Jack Coan picked the Pokes apart.

Coan entered this game with the game manger label, and he looked like Tom Brady. Coan had 342 first-half passing yards. His career-high for a game entering Saturday was 366. He had four passing TDs by halftime, tying his career high for a game.

Being a “game manager,” Coan was fine nickeling and diming the soft coverages until something opened up down the field.

My credentials on quarterbacks/coverage aren’t nearly as heralded as Brandon Weeden. Here is what he had to say about it:

And then in the second half, OSU’s defense got more aggressive up front and in the secondary and locked up Notre Dame like the Cowboys have done to teams all year.

5. Warren Was OSU’s Most Fun Running Back to Watch Since?

The Jaylen Warren year was so much fun.

I’m not sure whether Warren was a better college running back than Chuba Hubbard or Justice Hill, but the Utah State transfer might’ve been more fun to watch than both.

This could be recency bias, but when I think about Hill’s career, the run that sticks out most is him slashing around around Boone Pickens Stadium in the 2017 Bedlam game. For Hubbard, it’s him pulling away from K-State defenders while watching K-State defenders helplessly try to catch him on the big screen in the east end zone.

For Warren, there are so many runs to remember. Him juking nearly every Tulsa defender on that touchdown run. His untouched 75-yarder in Boise. Him gashing the Longhorns in the second half in Austin. All the double-foot leaps into the end zone. It was so much fun.

Then to add to the outstanding plays on the field, Warren had a toughness to him that any fan base would appreciate. Dave Hunziker tweeted a story Saturday morning that Warren was so upset he couldn’t help his team in the Big 12 Championship that he walked three miles home from the Stillwater airport despite people offering him a ride. And in this age of bowl opt-outs, Warren returned from an injury just to play with his team one more time.

He was a surprise, unknown portion of the Cowboys’ 2021 recruiting class, but man this year would’ve been hard to imagine without Jaylen Warren.

For the first time since the 1980s, OSU had two AP All-American defenders, and both made game-winning plays Saturday.

Early in the fourth quarter, Kolby Harvell-Peel straight up ripped the ball away from Notre Dame RB Logan Diggs. Harvell-Peel picked him like a booger.

Apart from the change in possession, the takeaway didn’t amount to OSU points, as Brennan Presley fumbled en route to the end zone, but it further suffocated Notre Dame’s momentum.

Then with less than seven minutes remaining on the clock, the Fighting Irish were on OSU’s 30-yard line with a chance to cut the Cowboys’ lead to one score when Malcolm Rodriguez picked off a Coen pass, just Rodriguez’s second career INT. Had Rodriguez not picked it off, Harvell-Peel might’ve as he was right behind Rodriguez.

The pair of All-Americans combined for 19 total tackles, three pass breakups and the two takeaways. Rodriguez is out of eligibility. Harvell-Peel can come back, but hasn’t made an announcement one way or the other. Assuming this is the last go around for both, it was a special one.

From one end of the experience spectrum to the other, Jabbar Muhammad and Korie Black played excellently.

The two sophomore corners were given their biggest work loads of their young careers in a crucial game but did great. This pair combined for 11 tackles and two Muhammad PBUs. Muhammad stood out the most, being around the ball more, but considering Black was on the field as much as he was and went unnoticed for the most part (apart from some solid coverage on a late fourth-down stop), means he played well.

“Everything that they got today, man, they deserved,” Harvell-Peel said of the young guys. “From Day 1 that they got here, we recognized both of them as two dudes that can play. … The future is bright in that corner room. As long as they in there, we’re gonna have two solid guys out on that island.”

The two got thrown out there as Christian Holmes dealt with a nagging shoulder injury.

“I’m with you guys, I didn’t know I’d be out there that much,” Muhammad said. “But we all prepare like ones, and that was the outcome.”

8. And OSU Should’ve Won by More

OSU had two fourth quarter fumbles in the red zone. This could’ve been an even more boisterous comeback.

It sounds weird saying this game was closer than it should’ve been when OSU won despite being down 28-7, but it was.

Say what you will about Mike Gundy, but he gets his guys going in bowl season.

With the win, Gundy moves to 11-5 in bowls, and OSU has won bowl games in five of the past six seasons. Here is a list of trophies in OSU’s case thanks to Gundy:

Sure some of those bowl games aren’t the elite of the elite, but in this era of opt-outs and not caring about bowl games, Gundy’s teams have been consistently excellent in them.

10. The Perfect End to a Wild Season

In between there were just two or three games that didn’t have some sort of dramatics. It was a movie script season. What team that beats Missouri State by a touchdown at home beats Notre Dame in the Fiesta Bowl?

From the too-close-for-comfort opening games against Missouri State and Tulsa. To the controversial fumble call in Boise (a game Cale Cabbiness caught a pass to win the game). To OSU beating Baylor despite losing the turnover battle 3-0. To overcoming a deficit in Austin. To losing after a controversial spot in Ames. To winning Bedlam despite a disastrous third quarter. To losing a Big 12 title game by mere inches. To overcoming a 21-point deficit in the Fiesta bowl. … This season was magical. It probably took 10 years off the lives of those who witnessed it, but it was magical none the less.