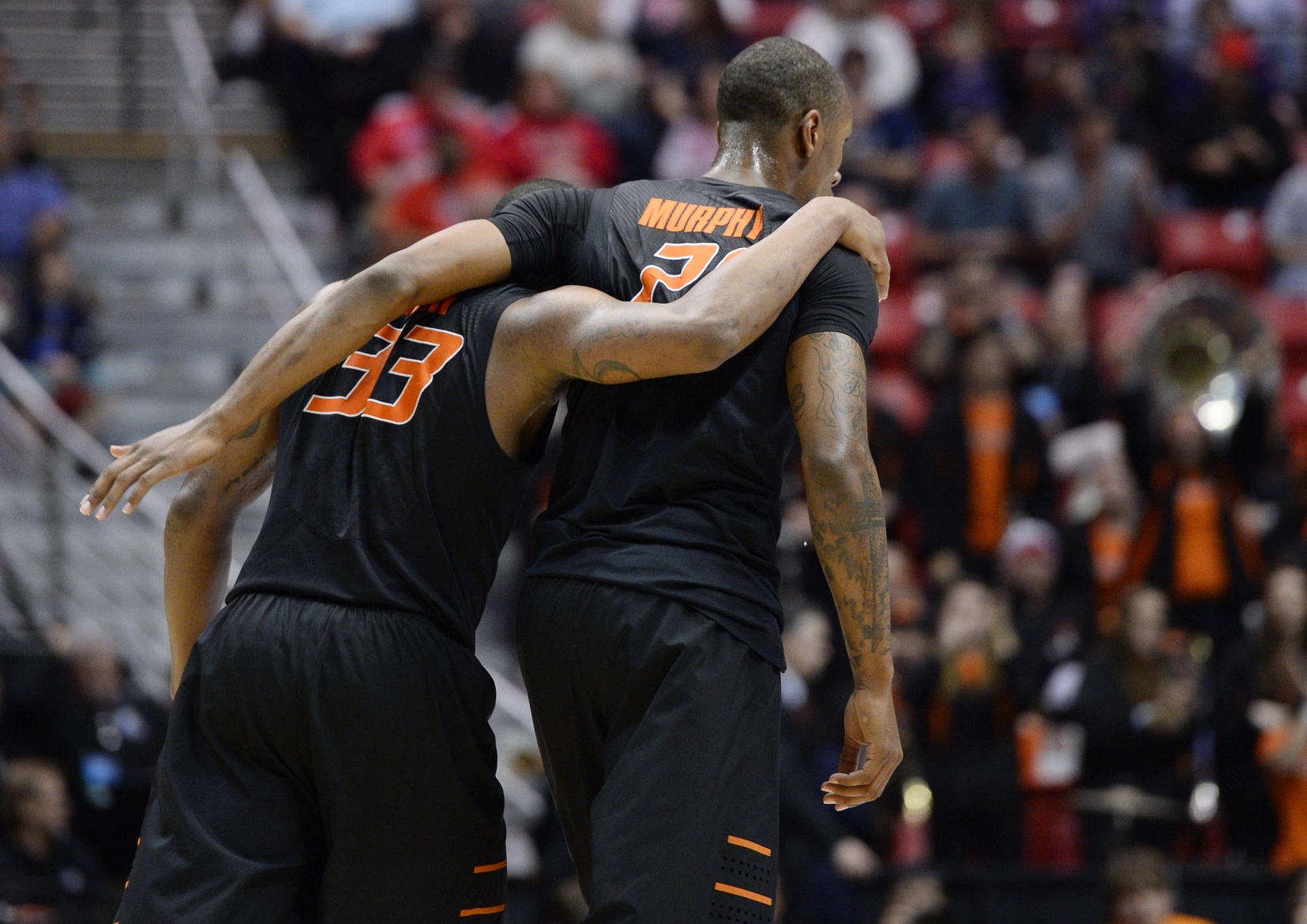 Yes, yes that was a fitting end to the most bizarre season of Oklahoma State basketball I’ve ever been witness to.

OSU and Gonzaga struggled to a 61-foul extravaganza on Friday evening that left the Pokes on the wrong end of a 85-77 first round exit.

They did set a record, though.

It also marks the end of Travis Ford’s sixth year — a tenure that has seen him be paid north of $10 million to finish seventh (or worse) in the Big 12 five times and win one (one, uno, a single) NCAA Tournament game.

OSU never led — in fact in the last four years it has only led for two minutes and 51 seconds in NCAA Tournament games — and Markel Brown and Marcus Smart (and maybe Le’Bryan Nash) will leave OSU having never tasted success in the Dance.

Gonzaga got out to a smoking hot start by hitting its first seven shots and even though OSU tried to answer over and over, it just couldn’t get in front.

Marcus Smart had the most Marcus Smart game ever to go out on (the first time a player has ever had a 20-10-5-5 line in the NCAA Tournament) and Markel had 20 points but Nash got in foul trouble and Forte never got in rhythm (3/12 from the field).

Gonzaga crushed the Cowboys on the interior, too. OSU actually outrebounded them but the Zags’ 7’1″ big man, Przemek Karnowski, had 15 points on six of nine shooting. He was a beast.

And the fouls. Oh, the fouls. 61 of them, to be exact. The most in any non-OT Tournament game since 1975. Five guys fouled out, three for OSU, two for Gonzaga. This is how bad it was: Christien Sager almost fouled out.

So the 2013-14 season, the one that was supposed to be The One for Travis Ford, the one that held all of the fruits of so much labor, is finally and mercifully over.

I don’t know what the long-term ramifications are — I wrote after last year that Ford should be gone so I’ll likely do it again — but I know that I’m bummed that we’ll never see No. 22 in an OSU jersey again. He was everything you wanted a Cowboy basketball player to be — four years of climbing the ladder (somewhat literally, definitely metaphorically).

He was a great one.

He certainly deserved better than whatever this season was.

• How great was the Stockton-Forte matchup?

• That start by Gonzaga, my gosh. They were on pace for 136 points five minutes through the first half. It felt like it would never end. They were so patient, too. Something we rarely are.

• Does Travis Ford have a self-imposed weight limit on his players? That’s the only explanation, right? Like, maybe he thought early on in his career that coaching regular teams was too difficult and wanted to raise the degree of difficulty. How does every team we play have like five players bigger than our biggest guy?

• Could you bet on “number of times TNT will show hall-of-famer John Stockton in the crowd” before the game? Because I would have taken the over, no matter what it was.

• The announcers mentioning the fact that Christien Sager was in Cosmo as one of college basketball’s hottest players was my highlight of the first half..I haven’t decided whether or not that’s a joke yet.

• Why does Marcus always raise his hands when walking past people even if it’s not necessary (which is never)? Does he have Blake Griffin film on a loop in his dorm room?

• The announcers made jokes in the first half about us using a walrus from what appeared to be Sea World as a big man. That’s where we we’re at.

• Gonzaga is so smart and patient on offense. Not perfect, but they just don’t make mistakes. Compared to them we looked like an AAU team that was used to beating up all the other AAU teams because we had better players.

• I wasn’t really that mad about the Ford technical. I mean if you could choose a game to do it, I probably wouldn’t choose this one but it’s not a backbreaker. And if it gets you two or three calls in the second half then it was worth it. It’s actually kind of crazy that for all his theatrics on the bench all year he wasn’t even moving when he got it called.

• Barkley said at halftime that we “don’t play hard all the time.” We “play on talent.” I disagree. Everybody on the team goes hard pretty much all the time, they just often don’t know what they’re doing and do really dumb stuff quite often.

• Pangos would own the Colvin Center. His layups are just the silkiest.

Mark Few to David Stockton after he fouled Marcus Smart on a jump shot: "Just let him."

• I was surprised at how often Gonzaga went away from the “throw it down low and it’s an automatic bucket” offense. It was working pretty well in the first half.

1. Hall-of-famer John Stockton
2. Mason Cox getting playing time
3. Showing replays of possible fouls and/or flagrants
4-922. I don’t know.
923. Everything else.

• You know how networks get in trouble for pumping in sneakers-on-hardwood sounds? They should try “ANDONE!” tracks after people score. You wouldn’t suspect it but it would seem normal since it happens on every single drive to the bucket.

• How many straight minutes of basketball do you think Pangos and Stockton could play? What if I set the over under at 250.5 minutes? They looked like they’d just got done with some light calisthenics at the end of the game.

• I really like Mark Few. He always seems like he’s in control of his team — doesn’t scream much, works the refs. He just seems like a really good coach. Brad Stevensish.

• Off-the-ball foul calls are the absolute worst. I hate them. Even when they’re actually fouls and my team benefits. I still hate them, they disrupt the entire game.

#OKState should offer Gonzaga $1 million to trade coaches for the rest of the game.

• This was called an intentional foul. I’m in awe. So is the announcer. “He just grabbed right derrrhhhhhhh…”

Okie State fans have a legitimate argument. These refs are trash.

• There was a shot of Travis Ford’s wife that I took but I can’t post it. I feel too bad. That’s what this season has done to me.

Marcus Smart not pleased w/ the officiating in his game. "Every call went against us, no matter what." Referred to it as "a Debbie Downer."

• I like how, at the end of the game, Smart stops shooting threes when we actually need them.

• On the fouls — they clearly didn’t favor one team but it was probably the least enjoyable game I’ve ever watched. And Nash continues to get some of the most head-scratching calls I’ve ever seen.

• For as much of the stats as he stuffed, Marcus was putrid from the floor (5/14). He also missed seven free throws and had six turnovers.

Markel Brown chokes up while talking about his career ending: "It's just hard to go out like that." #okstate

• What do you think Pangos’ free throw percentage is late in games? Below or above 99 percent?

• For all the wackiness this season, this is definitely meaningful for everyone who was involved. Not sure any number of losses can take that away..

Heck of a journey with these brothers and I wouldn't change it for the world. Definitely made memories and friends that will last a lifetime

Next game: Florida State in Dallas…