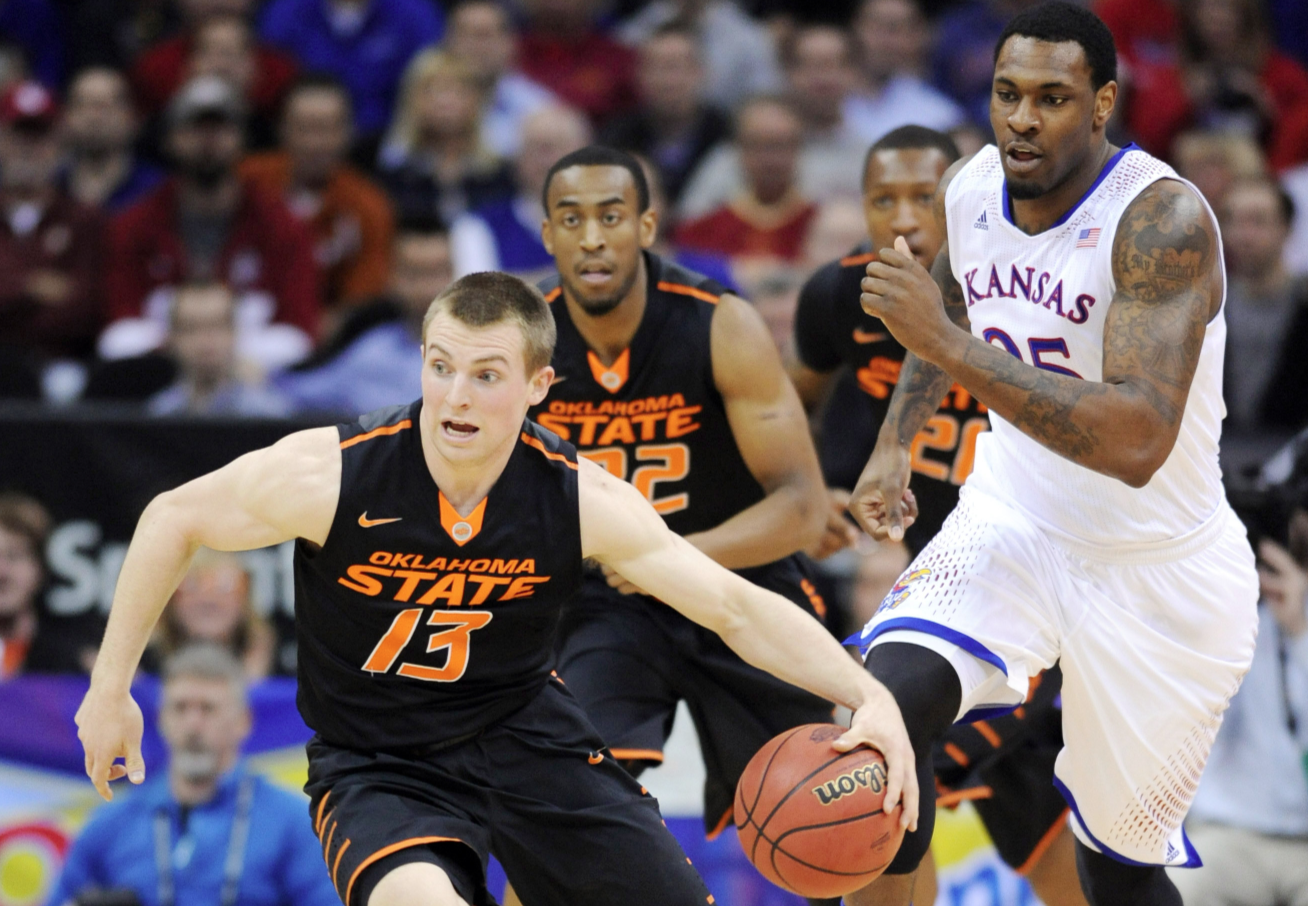 My takeaway from OSU’s short stint in the Big 12 Tournament is that this team is actually pretty fun again. It’s not deep and I don’t think it’s very well coached and it still sometimes does things that make me want to throw my mouse through my office window but it’s a team that seems like it’s having fun and it shows.

OSU got off to an ugly start against Kansas on Thursday — its 23 points in the first half were the fewest it’s scored in a first half all season — but just kept hanging around and hanging around and forcing Kansas’ guards into turnover after turnover while taking advantage of foul trouble on Tarik Black and Perry Ellis in the second half.

A nine-point halftime lead by Kansas swelled briefly to 11 at the beginning of the second half but OSU used an incredible seven-points-in-28-seconds run to cut it to one with seven minutes left.

The two teams traded buckets the rest of the way and Markel hit an insane fadeaway three over Wiggins to put the Pokes up two with a buck thirty left. Wiggins tied it with a minute and OSU refused to go two-for-one, instead relying on the ever-reliable Marcus Smart 25-footer with 30 seconds left.

They went to overtime at 67 all.

Then OSU just ran out of gas. Truthfully it probably ran out of gas long before that but the fumes of Forte (16 points), Nash (19 points), and Smart (14-7-3-2) were enough to hang with an Embiid-less Kansas for 40+ minutes.

The real problem for the Pokes was that Markel was dragging. That’s not a shot at him — he’s averaged something like 55 minutes a game in the second half of the season and he’s banged up to boot — he just had nothing left in the tank.

So while the loss is a bummer, it might actually be a good thing for OSU and in the NCAA Tournament. Bill Self said after the game (right before he called Holly Rowe “babe”, see below) that OSU is playing “like a top four seed.”

I’ll take what I can get with as thin as we are and the season we’ve had and a fun, dogged Oklahoma State team playing like a four seed going into the Dance is everything I can get.

• OSU’s legs early on looked Vince Wilfork heavy. That’s not good when you’re trying to run up and down a basketball court for 40 minutes.

• KU’s unis were subtly great today. Well, as great as Adidas uniforms get. But the addition of the dots or circles or whatever they are is terrific.

Fellas. This is not a video game. Go to the basket.

• I just realize Musburger is doing four of these today, how awesome and punch drunk is he going to be in the second half of game four?? Or is he just doing two of them? Whatever, imagining him doing four is so much more fun.

• The Wiggins-Markel matchup was the bounciest. When those two are going good they’re as pure as college basketball gets. That being said, I thought Ford’s decision to put Smart on Wiggins was wise. Wiggins doesn’t strike me as someone who responds well to getting shoved around. [looks at box score, realizes he had a Durant-like 30, is thankful he’s leaving]

• We just have nothing going on inside. I know Murph is trying but he’s just not very good. It seems like Nash should get more boards than he does, too.

• I don’t know why but this killed me. A true LOL.

@pistolsguy Do you think Cobbins gets more airtime being injured or if he was playing? Fran mentions him every 30 seconds.

• Two questions: Why didn’t Kansas go inside on every possession? Were they scared Ford would put Mason in? Also, why do we just refuse to go to the bucket with our guards? I’ve never watched something more infuriating (besides some of the screen passes we threw last fall…oh and 75 percent of Nathan Simmons’ runs).

• I feel like Forte isn’t just white-guy good anymore. The Eurostep needs some work in the offseason (with a chisel and many power tools) but he’s a legitimately good college basketball player, on offense anyway. We can talk about defense later. I like the way he plays, too. Doesn’t whine, just goes hard and makes plays. Smart should take notes.

• This should give you an idea of the kinds of calls Wiggins got in the first half.

[goes to get Gatorade from fridge during timeout, is whistled for foul on Wiggins while 600 miles away and not playing]

How would we ever know it was an "and 1" if the player didn't scream it at us?

• Fran on the Murphy jumper that got stuck between the rim and backboard to start the second half: “That’s not the shot you want in the first possession of the second half.” No, no it’s not, Fran.

• OSU’s bench started doing some sort of celebration where three guys stand and sit then a fourth stands and does a quick clap/dance. I can’t tell who or what they’re doing but I know Soucek is involved. Which is, of course, awesome.

• If Drew Gooden and Shane Battier ever have a kid together (which…yeah) it will look exactly like Perry Ellis.

• It feels like Nash could draw a foul every time he goes up so I wonder what, in a ref’s mind, actually constitutes a foul. I mean, we could legitimately have four-hour games if they were called. I feel like I could attend a referee seminar and likely be more confused than I am right now.

In addition to being 0-4 in OT games this season, #OkState also has dropped 4 additional #Big12 games by 4 points or less in regulation

• Let’s talk about Wiggins some more. How much better is he right now than he was in the first OSU-Kansas game in Lawrence? He and Markel could have a jump-shooting contest on pay-per-view and I’d fork over $30 for it. Silky.

• Some of the Smart-referee sequences in the second half were spectacular. It seemed like they were going out of their way to not call fouls for him/call fouls against him. He’s brought it upon himself — and Kansas fans reacting like he was just given the thumbs up in the Roman Coliseum was also great — but let’s not get egregious.

• Speaking of fouls, the fourth on Murphy was just awful, we’re getting a little liberal with the loose-ball stuff and the block on Nash in the lane where he was in the same spot for like nine seconds made me gasp. I don’t think the refereeing was one-sided (mostly because I actively choose to never think that) but those two really stood out.

• Today reminded me of our second game in the Big 12 Tournament last year in terms of our fatigue. Which makes me worried that next week is going to remind me of the first round of the NCAA Tournament…

• OSU’s five turnovers were its fewest in the last two seasons.

• Look, I get that everybody was sucking wind but Brent went a little heavy on the “wounded warriors” thing. They’d played two basketball games in 24 hours, it’s not like we were recreating Lone Survivor or something.

• Self dared Murphy to beat him all game. He left him alone and doubled Nash or whoever was driving. Murphy never beat him. He is literally slow on the uptake.

• I realized today that the only thing that drives me more crazy than Smart taking threes is Smart taking long twos.

• It’s weird that only four losses separate OSU and Kansas in the loss column. Four of those eight OT/last four minute games.

Somebody (hopefully not Oregon) next Thursday or Friday.