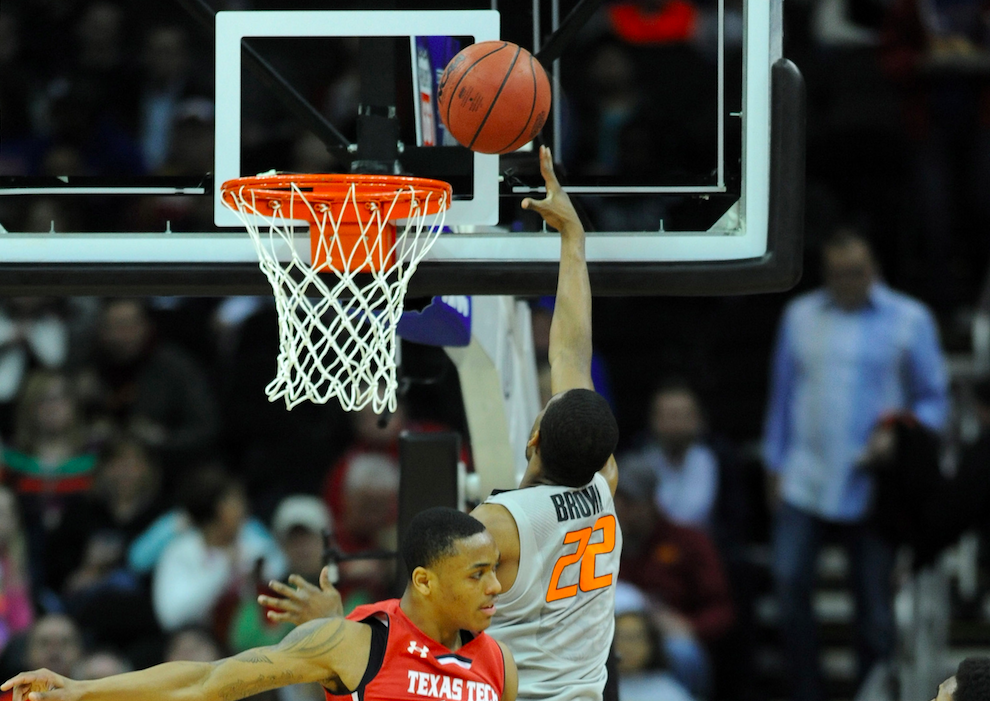 Sorry for the delay on my recap. Watched the first half, had home group, then went back and watched the rest, and here we are.

Oklahoma State got off to a start that made you wonder if its perfect first-day record at the Big 12 Tournament was in jeopardy (10-0 coming in) as Texas Tech went up 8-0 in the first few minutes.

But things flipped quickly as the Cowboys went on a 28-5 run through the middle of the first half. Tech never got closer than 16 in the second half and OSU cruised 80-62. The second half was what more of OSU’s second halves this year should have been — boring.

I think that because TCU is in the Big 12 we forget how bad Tech actually is but that shouldn’t take away from what OSU did tonight — exactly what a team with three of the 15 best players in the league should do…namely, roll.

Marcus Smart had an absolutely absurd 18-7-7-6-1 line (with zero turnovers) in the rout. Markel chipped in 20 as well and Nash and Forte both had double figures.

It’s hard to argue with what Markel said after the game on Wednesday:

Markel Brown: "I honestly think that we're playing good right now but our best basketball is still to come." #okstate

Which brings us back to what I said before the tournament started. I think if OSU can get past Kansas on Thursday afternoon (and I think OSU will) then it can win this tournament.

This season has been like an inverted bell curve and that’s a good thing for the Pokes because if Travis Ford can somehow sustain six pairs of legs that are going to weigh about 500 lbs. by Saturday, OSU can do in the Big 12 postseason what it should have done in the regular season.

• Is Jeff Orr in Kansas City?

• I liked the uni matchup a lot tonight. Neither uniform is very good on its own but I thought they looked great when paired together.

• Kamari Murphy should get Williams-Sonoma to sponsor his hands.

• Tubby Smith’s Burberry tie was going pretty hard. If you did a “which Big 12 coach will wear a Burberry tie” power rankings, Smith would not rank very high on that list.

• Has Leyton Hammonds ever caught the ball at the three-point line and not shot it?

• I like pissed off Markel. We saw it for a while in the first half and it was awesome. Wish he played like that a little bit more (though I’m not sure how sustainable it is). Also, I love Ford yanking him right after he’d scored six in a row and was playing angry. Nice.

This game could double as a "How Not to Break a Full-Court Press" coaching DVD. #okstate

• Forte’s Eurostep needs some work. Like saying North Korea needs a better infrastructure. Those threes, though. I think he’s going to be sneaky high on my all-time four-year guy list when he’s done.

• How many people guarded Marcus Smart tonight? Was there a manager that guarded him?

• I love Smart posting up. Is there a point guard in the country who can guard him on the interior consistently? No.

• Bummed for Jaye Crockett and his injury. That’s not how you want to exit stage right your senior season.

• I don’t understand why Nash ever dribbles. What’s the best thing that can happen when he puts it on the floor? I would argue “a not-in-transition turnover.” And yes, I mean the best thing.

• Excite me, Markel. Do a front flip. Something.

I'm bored by Markel 180 two-handed over-the-head dunks. That's where we're at with him.

• Cobbins had shoulder surgery, too? Did he injure it wagging his finger from the stands?

• Pretty good job by Ford resting folks today. Thought it could have been a tad better. Here are the totals:

• Heh, this is a real possibility:

• I’m probably going to regret writing this but is Kansas scary without Embiid? Their guards turn it over with a consistency that likely makes Bill Self rotate his screensaver between Jacques Vaughn, Mario Chalmers, and Kirk

And yes I know Tarik Black and Perry Ellis are solid but that was a team that looked a little lost in GIA a few weeks ago without the big fella.

I’m not saying State is going to roll but I bet Kansas isn’t favored by more than three or four. [thanks God for working from home for a 2:30 tip]