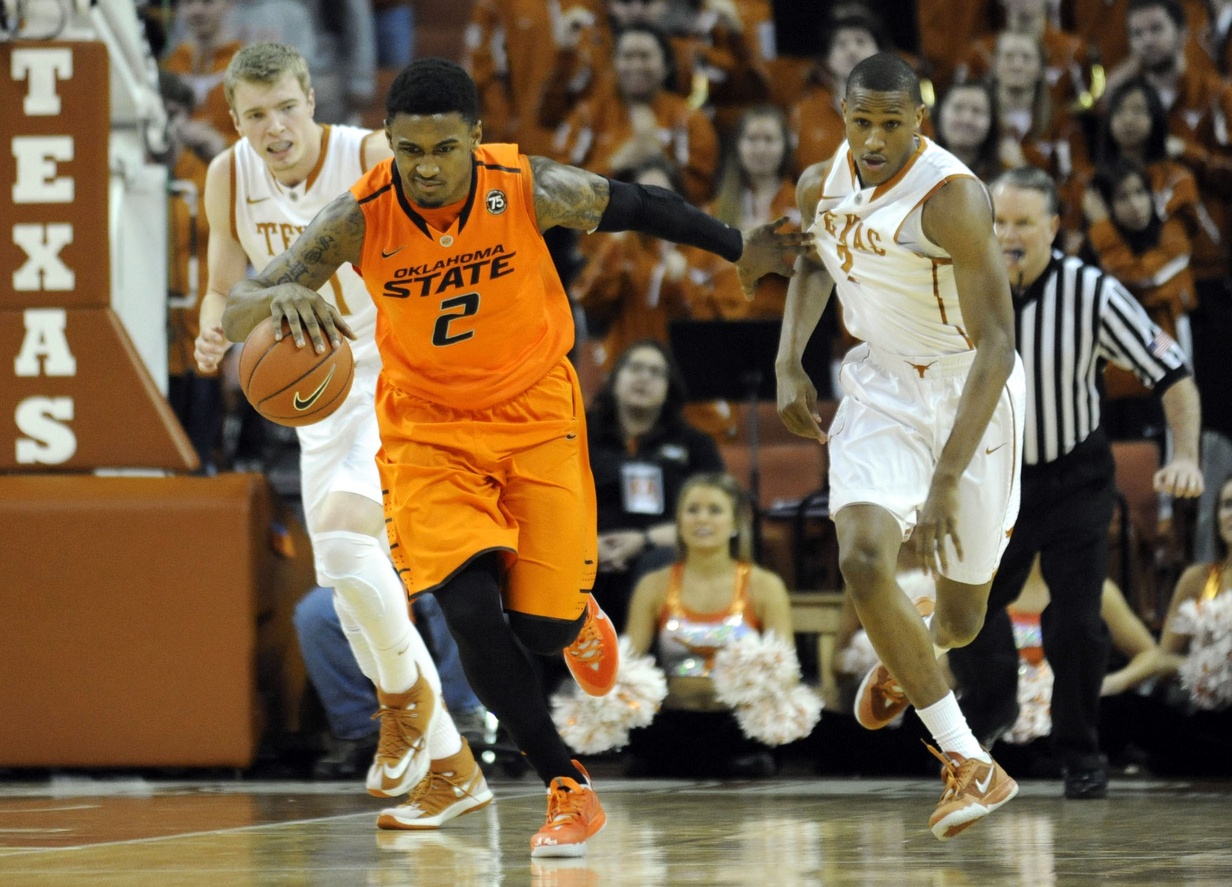 Every time I think we hit rock bottom Travis Ford exceeds my expectations. He’s good at doing that, if you’re looking for positives.

Barring Marcus re-acquiring his superpowers for three games in Kansas City this team will not be attending the NCAA Tournament and could lose early in the NIT.

And now this — getting embarrassed in Austin on a Tuesday night when they were missing their leading scorer.

Mason Cox and Gary Gaskins played meaningful minutes[1. No offense, fellas.], Leyton Hammonds got in in the first five minutes, and I think we ran one set play the entire game.

On the other side Texas hit every single thing they looked at in the first half. Javan Felix had an easy 27 (on 14 shots) and they shot 47 percent from the field.

There was just no plan at all for OSU for the entire game. The first 10 minutes involved getting Forte and Markel as many deep shots as possible, the former off of screens and the latter while just creating off the dribble.

It was unbelievable to watch, and not in a good way.

Look, I get that you’re down your best player and your linchpin on defense but my gosh, at least pretend like you’re formulating a plan.

Is this how Kansas would play without Andrew Wiggins?

No, but I guess this is what putting your entire team on the shoulders of a 19-year-old looks like.

On the plus side the performances from Mason Cox and Christien Sager were enjoyable. I couldn’t be more stoked for Mason (and Nolan) and his first career points and nasty swat (see below) and Sager is a legit 10th guy on a really good team.

The problem for us is that he’s currently our sixth man and we are not, in any sense of the word, a good team.

• Our starting lineup is a sight to behold, isn’t it?

• I was watching Kansas and Kansas State tonight and I feel like they each have five post guys who could start for OSU. How are our big guys right now Murphy, Soucek, and Cox? We’re a Big 12 school, not Texas Southern.

• Our defense doesn’t push teams away from the rim. I don’t know why but it seems to invite them to within 10 feet of the bucket. Come on in, fellas.

• What was the over/under on how many times ESPN would show the Smart shove? They’re all in on this.

• I watched the game with my dad tonight. He is about as high on Le’Bryan as I am on Ford. He subscribes to the table test with LB and thinks he takes more off than he put on. I disagree but [watches Nash throw a transition alley oop into the 12th row] I can see where he’s coming from.

• It was cool to see KD talk about the 3OT game. Boggan walking out to midcourt for the third OT and telling him “let’s go, showtime” is still one of my all-time favorite moments.

And people calling Boggan “Boggans” is one of my all-time least favorite things.

Well, it wasn't going to be overrated, I can tell you that RT @jjhelsley Texas students chanting: "Where is Marcus?"

• I would do this on purpose if I was him:

If Mason Cox never takes another shot he will be able to tell people he was the greatest shooter in NCAA history (100%).

• I don’t know what part of this to be most disturbed by: Leyton Hammonds got fouled on a three in the first four minutes of a conference game and missed all three free throws.

• Markel kind of doesn’t get back on defense sometimes.

• You know yesterday when Ford said “they” wanted him to work on the gameplan instead of making Smart decisions. Yeah, what did he work on? We ran like three offensive sets in the first all game. Well, they were all offensive, but I meant on offense.

• How many buckets have we missed inside five feet this year?

• Death, taxes, Bill Self in the Big 12, and a tall Texas white guy who can yank from deep.

Cowboy basketball is going to be soooooooooooooo good next year, you guys.

• Not dropping my savings account on Texas -4 was dumber than anything Travis Ford has done this year.

• ESPN told me Smart was worth three points in Vegas. Did they mean 30?

• To what degree is Mason Cox a better player than Soucek? It has to be a multiple of 100, no? Speaking of Mason, does he not run in practice? I thought he was going to die three minutes in. Carson suggested that he might foul out on purpose just to get a breather.

• I definitely thought Mason would play in the second half of a blowout in Austin when the season started. I just thought…yeah.

• Brian Williams looked about as excited to play basketball tonight as Travis Ford did to hold that press conference on Sunday night. He was listless, and I’m being kind.

• This was the moment of the game. The only way it could be better is if I had Mason’s dad’s reaction but that would likely break PFB, if not the Internet.

This is funny, #okstate friends RT @BigggVic87: My Algebra tutor just made a three! Lol

• My wife said it best: it’s a sinking ship without a captain.

Bedlam on Saturday (I don’t know if I can watch).