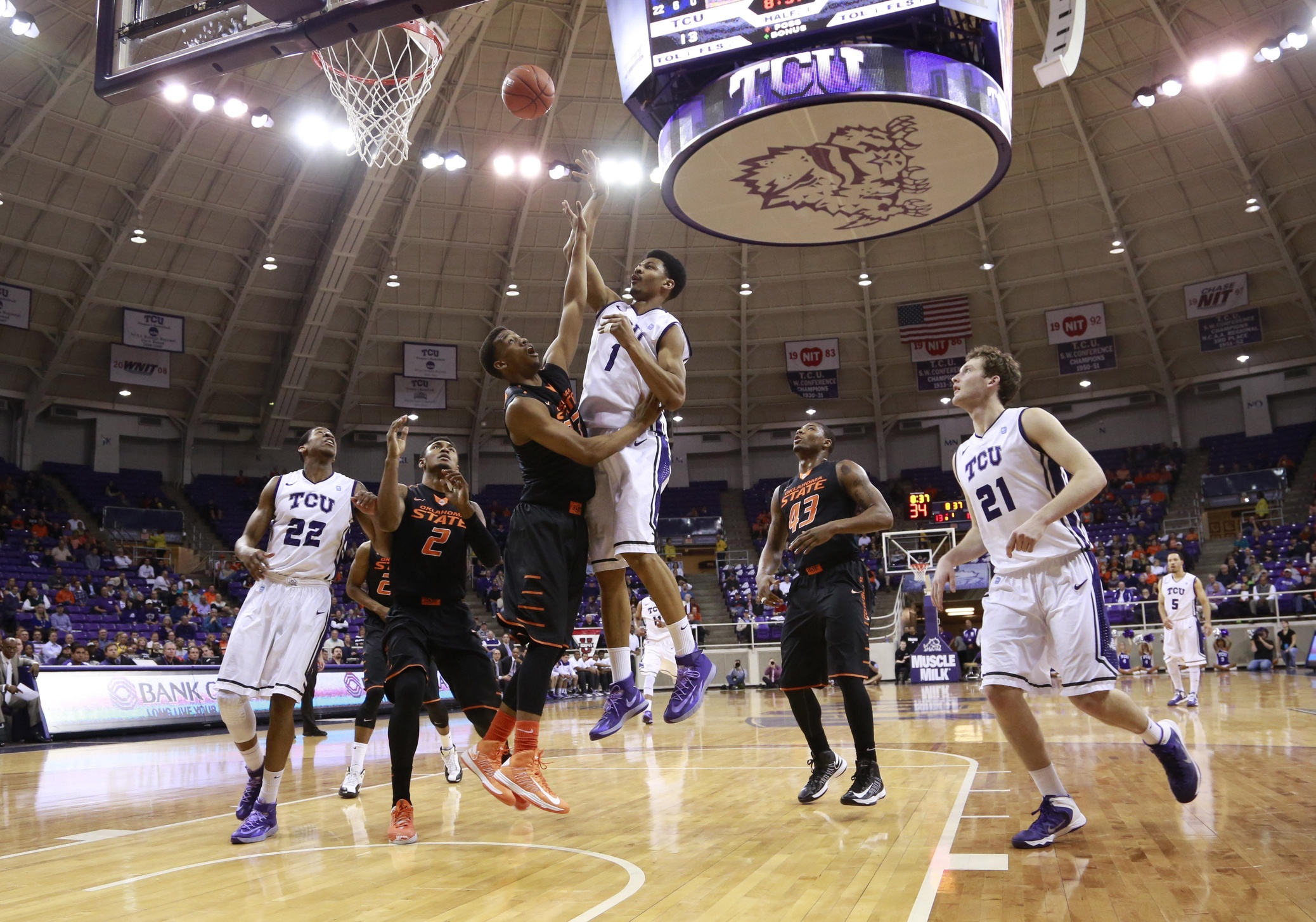 Phil Forte carried Oklahoma State in the first half with four three pointers and finished with 23 points on the evening as OSU rolled TCU 76-54.

Marcus Smart and Markel Brown started out 2/24 (not a typo) but Smart hit his last five threes to end the game with 17 points, eight boards, seven assists, and five steals. You know, just your usual Marcus Smart near-quadruple double.

Leyton Hammonds was really nice in the win as well. He was Ford’s first selection off the bench and contributed with 13 points on seven shots and three boards.

TCU is really awful, potentially historically so, but the Pokes took care of business even though things  got my heart up a beat or two with under 10 minutes left in the second half.

TCU had cut it to six (I have no idea how other than Markel/Marcus/Nash were 4/28 at the time) but OSU reeled off nine points in 54 seconds and Travis Ford’s cardiologist went back to sleep.

I never really know what to say about games like this. It’s tough to say beating TCU is a “good win” because…TCU…so I look for little stuff OSU should be working on.

The offense continued to improve its spacing tonight even though a lot of the big three’s shots weren’t really falling (until late). That might be a good thing with KU coming to town (I presume all of these shots are being saved for Saturday) but I worry that Smart’s late-game barrage will rekindle in him the idea that he and Ray Allen share a basketball stratosphere. [1. He’s shooting 29 percent from three on the year.]

They don’t, and OSU is at his best when he’s slashing and cutting and getting to the free throw line and dishing on the seams to his best bud from high school.

He should know that by now. We’ll see on Saturday.

• It took me a while to understand this. He has a 3 on each tricep.

• Everyone kept commenting on how few people were at the game but, I mean, if you’re a TCU student what exactly is the incentive to go to a TCU basketball game?

• How many threes do you think Smart would have to miss in a row for someone (anyone) to tell him to stop shooting them? I would say he was just trying to find his stroke against an atrocious TCU team but the only evidence I have that he can discern between a good and bad shot (for him) is the second half of the Tech game last week. And that’s not a large sample size.

I also don’t understand the streakiness. He goes 5/44 and then nails his last five shots. How many will he take against Kansas on Saturday?!

• One of the announcers noted that OSU is the 15th most unlucky team in the country and dropped this gem: “I’m not buying a lottery ticket with Travis Ford!” Neither am I!

• I do love TCU games on TV. The announcers were “Miracle on Ice” level excited when TCU had a deep three to tie the game at 14 in the first half. They missed, unfortunately.

• Hammonds off the bench first over Brian Williams? I love it. Hammonds has zero clues right now about what’s going on but he’s going to be really good someday. Maybe a middle class man’s Markel?

I also felt good about this tweet before Hammonds went off..

I might be alone in this right now but I think Leyton Hammonds is going to be really good someday.

For some reason watching TCU guards closeout hard while Forte pump fakes from the Big XII logo is my favorite part of this game so far.

• I realized tonight that Smart is just a rich man’s Byron Eaton. That’s not a bad thing, Eaton was really good his senior year and Smart is even better, but I think that’s what he is.

No elite skill beyond his ability to use a superior strength and body at the collegiate level to his advantage. Superb defender, can get to the bucket at any time. I’m giddy about this comparison. Maybe all of you had already thought of it.

• OSU shot 30 threes tonight. That’s fine against TCU but not real inspiring for the rest of the season..

• Only one team (Iowa State in 1988) has ever made the Dance after a seven-game losing streak, according to Rece Davis. Wow. Also no team has ever lost 11 in conference and made it. We’re at nine right now.

• It feels like Markel has bringing the ball up a lot more — even in games Smart has played in. Wish I had a stat on this…am I the only one feels that way?

If Mason would have thrown down that alley-oop I'd be on my way to Dallas right now to visit my dad in the hospital.

• The announcers also said Murphy didn’t like being called “a junkyard dog.” Would he prefer “a junkyard dog with no ability to grab a defensive rebound”?

Id be Mark Price @Brett_Moore: Hey @GottliebShow – what if you'd had a shot like Phil Forte?”

• Kyan Anderson looks like someone who will be dropping 45-point games at the YMCA for the next 35+ years. His shooting percentage as an old man will be otherworldly.

• How about this stat? Smart has made more than six shots in a conference game only once. Was 6/17 tonight.

• One of the announcers referenced “a tale of two halves” (Smart’s two halves) as “the lesser known Dickens novel”! And he didn’t even break stride!

• I was also informed that Ford believes OSU would be a lock for the tournament if its losses were spread out instead of the seven-game streak. That might be the most embarrassing thing he’s said/done all year.

• Forte is like one of those mini-pop-a-shot games we all had when we were kids. The ones that shot so fast it was hard to know what happened. His release is just incredible.

KU on Saturday. I’ll be there (if they allow me in the doors).