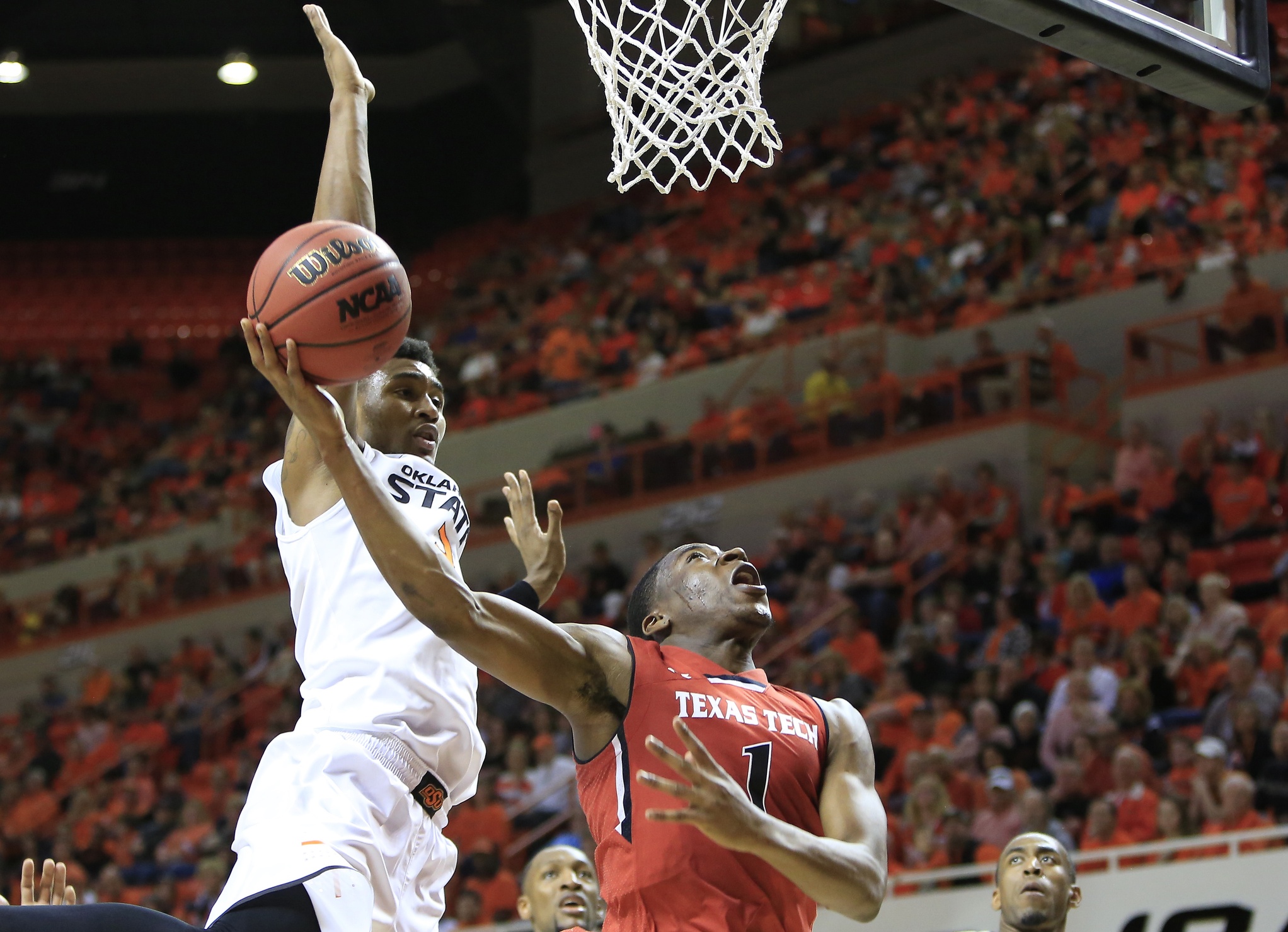 That was the team we thought we were getting all year, wasn’t it?

An inspired Cowboys squad that took good shots, didn’t explicitly try to find itself on SportsCenter, and played the kind of defense that leaves you with a zero in the loss column at home at the end of the year.

As it turns out Marcus Smart’s return to the lineup was the shot in the arm Ford’s bunch needed to get the train back on the tracks. He had a ridiculous 16-3-10-6-2 line and there wasn’t a hero ball possession to be found.

He was aided by a monster performance from Le’Bryan Nash (21 and five…and all of the dunks), 20 points from Forte, and 11-6-6 from Markel Brown.

David Ubben made a good point during the game that it was almost shocking to see how little hero ball OSU played given how much they have to be pressing to get a win right now. Maybe the suspension was what everybody needed.

The most telling thing to me — the moment I started to wonder if Smart was putting it (back) together — is that he didn’t score until there was 4:04 left in the second half.

Not because he was shooting and missing but because he wasn’t shooting.[1. To be fair he shot…and missed…three threes in the first half.] He’s always called himself a distributor and today he showed that off with a career-high 10 assists.

Texas Tech is not a good basketball team but don’t let that belie the fact that OSU looked spectacular today. That second half was arguably the best half OSU has played since the Big 12 started.

They might have to win the next four (plus a couple in KC) to get in the Tournament, but the team I saw today is more than capable of doing just that.

If the #okstate bench appears shorter today, it's because Gary Gaskins is absent for personal reasons.

• I like the Forte for Brian Williams swap in the starting lineup. I think in a perfect world Forte is your sixth man but Williams has been an abomination over the last three weeks.

• I wish Brad Sham would have called Bryndon Manzer “Lee Manzer’s son” instead of “an Oklahoma State standout.”

• Brendon Morris pointed this out but Le’Bryan was guarding Tech’s five and Kamari was on its four. This works, I think, because Murphy seems to be quicker than Nash which (hopefully) means fewer fouls on No. 2.

• I still don’t understand the Phoenix Suns circa 2005 offense where we try to score in under four seconds especially when it’s usually one-on-three on the break.

• I love Forte getting to the bucket (one of the few things I’ve correctly predicted/prescribed — probably ever) but…?

• I got tweeted that the game wasn’t on the Big 12 Network in parts of Oklahoma. Baylor-WVU was on instead. Maybe that wasn’t an accident?

• To the students who made the monstrous Bob Kurland cutout for the front row of the student section. That’s elite studenting. Good work.

• And it was operated by Mario!

• OSU didn’t have a FG from 17:55 to 7:30 in the first half. Of course I think Tech went longer than that. Just not good basketball for long stretches of the first 20 minutes.

• WHY IS BRAD SHAM SCREAMING AT ME?!

I feel like if I called games, I would call them like Brad Sham. Just a bunch of yelling and asking my color guy questions.

• This was awesome, shades of Reggie Miller and Jason Williams (the Duke one).

• It felt like OSU was a lot more patient on offense today. Maybe that was a figment of my imagination — and Smart still needs to stop yanking those threes — or maybe Tech is just that bad but it felt like they spaced things out better and waited for shots. Good ones, that is.

• I want to see what would happen if Marcus Smart refused to shoot field goals for an entire game. It feels like only good things.

• Was the Forte backdoor cut the first successfully-executed backdoor cut that didn’t involve Markel Brown in the last two years. I borderline gasped out loud. Our ball movement was shocking at times.

• The phrase “whittled his way in there” is underutilized. Good work, Brad Sham.

• We should have let Mason Cox drop the ball through the rim with two hands to honor Bob Kurland on Bob Kurland Day, shouldn’t we? Am I alone in this?

• I didn’t know Nash had these hops…

• I do love me some stats but there just isn’t one for a lot of the stuff Marcus does. There was a point in the first half when he started sprinting at one of Tech’s big guys who was trying to receive a lob. The poor guy got so scared he dropped the thing out of bounds. That’s essentially a steal, even though it’s not really a stat.

• Not to pick nits….but how is Ford going to take Smart out and leave Markel in at the end of the game??

• The game today was a blast, it really was. It was enthralling to watch, a relief for the players and coaches, and everything we wanted this season to be. But I still go back to what we’re rooting for long-term. Of course I want OSU to beat Tech in a vacuum but we live in a contextual world.

And in that world Travis Ford is not a long-term solution. So yes, I’m excited about the win, but don’t forget that just like the NBA the worst place you can find yourself as a college basketball program with a mediocre coach is smack-dab in the middle.