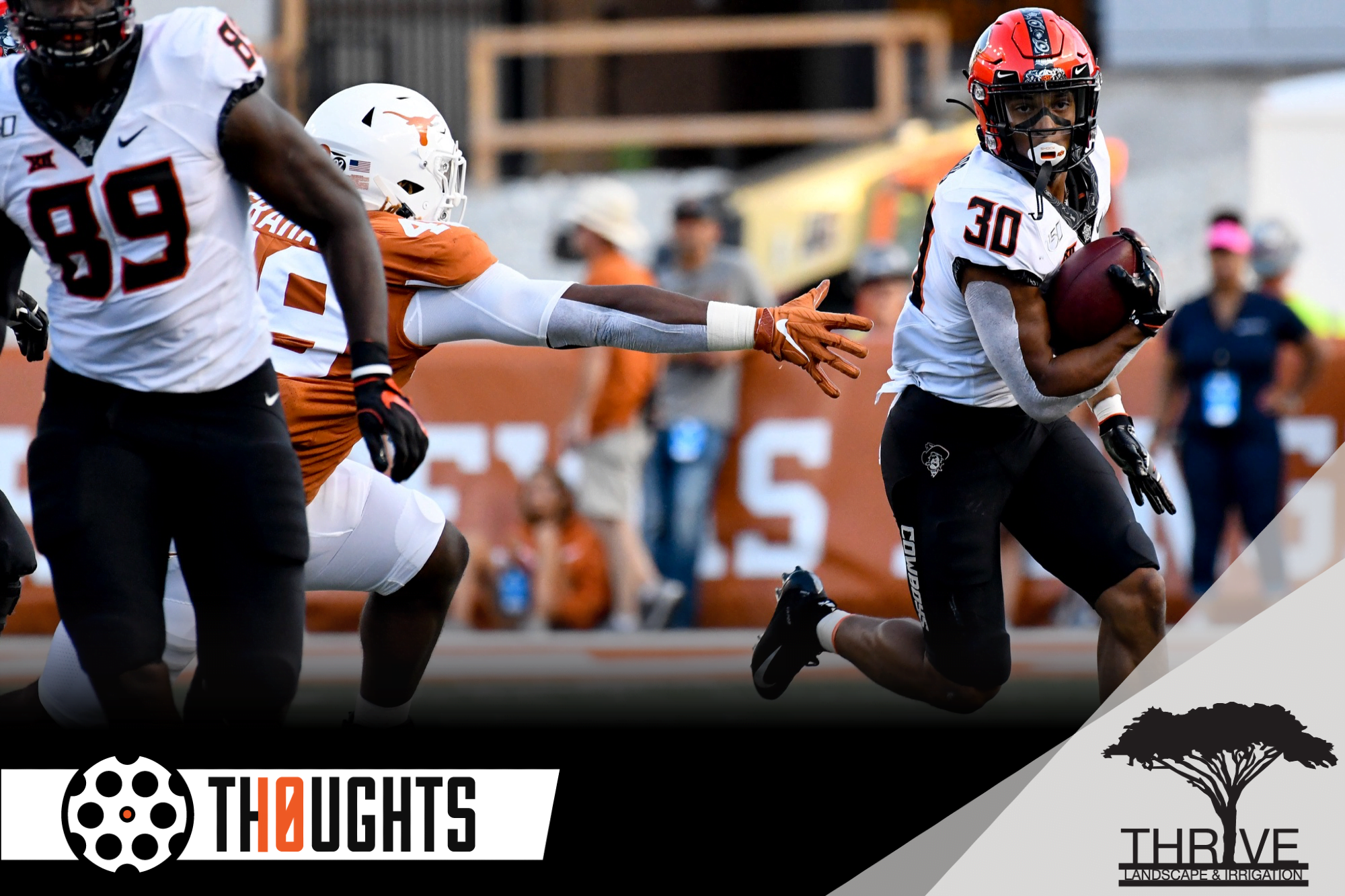 Texas downed Oklahoma State in Austin for the first time since 2008 on Saturday evening in an uneven 36-30 game that started and ended with a Poke jolt. OSU struck first and last but struggled in the interim as missed opportunity after missed opportunity flew past them (we’ll get to those shortly).

Spencer Sanders had a better game than his numbers would indicate. He was 19/32 for 268 yards and two picks, but he had 109 yards on the ground and a TD. Chuba Hubbard had 121 on the ground, but it came at the expense of 37 carries against Texas’ monstrous defensive front. Those two combined for 55 carries.

Texas started the game down a couple of DBs as well as their best skill position player and they lost what seemed like two rows on the depth chart worth of defenders during the game, but OSU refused to open the game up and get into a shootout. As a result they took their first L since before Barack Obama was elected president of the United States.

We’ll get to all of this shortly, but first a quick thanks to our friends at Thrive Landscape and Irrigation. They’ve been sponsoring the 10 Thoughts for two years now, and we finally have a fancy little logo for them at the top. If you live in Stillwater, check ’em out.

A non-exhaustive list of the myriad opportunities Oklahoma State had on Saturday to take control of this game (or at least play their way into it either early, late or in the middle).

1. Drive No. 1 — Sanders threw a dime piece to Landon Wolf at the 4-yard-line, and OSU walked away with just three points. Foreshadowing.

2. False Start — OSU had 2nd and 5 on Texas’ 12 on its first drive of the third quarter before getting called for a false start to make it 2nd and 10. They pick up 8 yards on the next two plays, which would have been good enough for a first down but instead had 4th and 2 and have to kick another FG.

3. The Review — Spencer Sanders picks up a first down at UT’s 3-yard-line, but it’s called short. OSU goes for it on 4th and 1 and whiffs. No points.

4. Pick-0 — Kolby Harvell-Peel picks Ehlinger and runs it back to Texas’ 33-yard-line. This drive somehow ends with an incomplete pass from Jake McClure to Jelani Woods. ¯\_(ツ)_/¯

5. Pick No. 2 — OSU still has a ton of time left in the game, but Sanders gets hit and throws his second pick with 10 minutes left in the fourth.

The rest of the game was a little distorted because Texas was trying to run the clock out and not totally attempting to score. So I think it’s unfair to say that OSU could have just kicked two of these FGs (from the 4-yard-line and on the fake) and say, See they could have been in overtime. But it’s not difficult to extract at least a few points from the five instances I noted above. On the flip side, they did take advantage of two badly fumbled punts from Texas. An aside: Does anyone in the Big 12 practice punt returns?

Texas is fine. They’re good. They have good players, and Ehlinger can go a little bit. But OSU can go with them and is actually better than them at the skill positions. But you only get so many chances against good teams. If there’s one thing we’ve learned about OSU in the Gundy era it’s that they’re not good enough to overcome this many mistakes against a team they can’t move around in the trenches like Texas. Not many schools are. And it finally cost them in Austin.

I wondered if Gundy would treat Sanders like a mom treats her first-born on his first trip to college. With tightly-clutched fists and one hand on the emergency brake. Thankfully he let him go a little bit, and after the wrong-foot seeds he tossed on the first drive, I was ready to build a mini Sanders statue next to wherever they put the Pickens and Big Sanders ones.

Then he may have had the best run by a QB in Oklahoma State history late in the fourth. I’m sure Zac had some similar ones, but this had me reaching for the oxygen tank.

Was he perfect? No. The game — as Gundy might say — still seems a little fast for him, but he’s got the goods. You can tell. It’s easy to see. He’s going to be so special over the next four years, and we’re going to look back at this game and laugh at how far he leaped over the next 45. It’s much easier to discern that in a loss at Texas than a big-stat win at Oregon State or Tulsa. If you can’t tell, I’m pretty hyped about the Spencer Sanders era.

It seemed early on at least like OSU was intent on forcing Texas to run and Texas was intent on forcing OSU to pass. Texas obliged on offense and gave the rock to Ingram over and over again. They had no respect for the middle of the field, and that was the right call. OSU, on the other hand, ran it 55 (!) times with Chuba and Sanders.

After the way he slung it on that first drive, I thought they should let No. 3 open up the field and save Chuba for the closing kick. Like how you run your best starting sprinter first in the 4×100 and then let the monster close.

Instead, OSU seemed too insistent on getting the run game going even though Texas was begging to get beat deep. OSU eventually (sort of) adjusted, but it felt like a missed opportunity to find some offensive rhythm and led to this fairly unimpressive set of drives in the middle of the game.

4. All of the Injuries

A real, serious question here: Does Texas have a strength and conditioning coach? What in the world? Did they think this FBS season would be played as flag football? Do they lift weights? Why would they not pay Rob Glass $5 million to come do Rob Glass things? Actually, forget I mentioned this!

There were certainly a few fakies mixed in there, but for the most part, the Horns’ ouchies seemed pretty real. You can add that as No. 6 on the list of opportunities OSU didn’t take advantage of.

I … kinda didn’t hate it. Your goal with a fake FG is to do it when nobody else watching the game thinks you’re going to do it. Down at Texas when you’re starving for points and just took a delay of game and seem like you have no idea what you’re doing could not be a more perfect time!

Now listen, they executed it like me trying to run the option with my five-week-old daughter and her bottle of milk, but I still kind of enjoyed the situation.

Is there a college football coach more unlikable than Tom Herman? Is there a coach in any sport more unlikable? Is he the most unlikable coach — fictional or non-fictional — in sports history? He makes the Icelandic coach from Mighty Ducks look like Tony Dungy! My favorite of his two handfuls of antics on Saturday evening was going with the “Frank Beamer 0-0 tie” celebration on a third-down stop in the first half.

What are you doing, Tom? 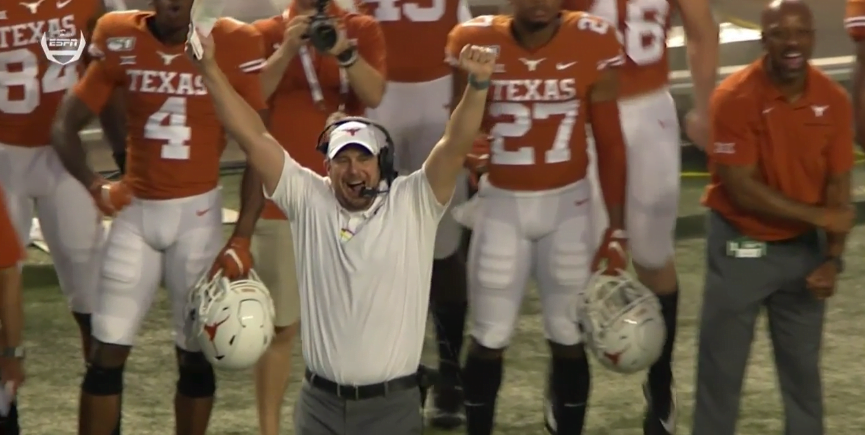 I’m not steep in the Xs and Os game, but I thought both sides moved around their chess pieces a lot on Saturday. I’m not sure they always moved them to the right spot, but OSU used two of their most effective pass-catchers — Jelani and Tylan — in the run game quite a bit. Jelani was his usual DE-killing self, and I thought Tylan had a massively underrated game with his blocking alone.

On the other side of the ball, when OSU started stacking the box a bit, Ehlinger tried to beat them deep and often succeeded. His arm strength was an eye-opener to me. He has the look of somebody who’s like a sixth-string shotputter on his high school track team, and yet he threw a couple of Chris Leakian balls on Saturday that had me like …

9. Middle of the Field

We talked about this after the Tulsa game, but OSU again got exposed down the gut. They face a problem that most Big 12 teams face. You can push more guys into the box and into the middle, but then you’re naked on the outside. I actually thought they did a pretty good job (??) of mixing and matching this against Ehlinger and Ingram throughout the game. They gave up four TDs on long, big-time drives and one on a short field after what will eventually go down as the worst pass in the history of the Spencer Sanders era.

Texas scored more against mighty LSU (38) than they did against Oklahoma State (36). OSU’s defense is never going to be what you (we) think it should be. They’re just not. Nobody in the Big 12 is. People talk about Iowa State’s defense in reverential terms, and a crappy Kansas State team put up 38 on them last season. It is what it is.

As long as you can keep teams from finding a groove (Texas scored on consecutive drives just once) and create at least a few turnovers (OSU created three, albeit just one on defense), you’re going to be involved in every game you play.

OSU has now lost four straight Big 12 openers and six of their last eight. They don’t discriminate either. They’ve taken Ls against Texas, Texas Tech, TCU, Baylor and West Virginia in that span. They’ve been a world-beater in conference play following Big 12 openers, but the first one off the top hasn’t been pretty.

The frustrating part here is that both the schedule and this Texas team opened up for them. Texas was asking to get beat late, and if not for Ehlinger’s will and OSU’s lack thereof, they might have.

I have no idea where this OSU team will end up after 12 regular season games this year, but I think I’m actually more confident following Texas than I was before.

After the most bizarre season in recent memory in 2018, OSU seems like it’s going to be back to generally what it’s been under Gundy: A quality team that beats worse teams and loses to better ones. The part I can’t help but leave this game wondering — just a little bit — is which category this Texas team should have fallen in.