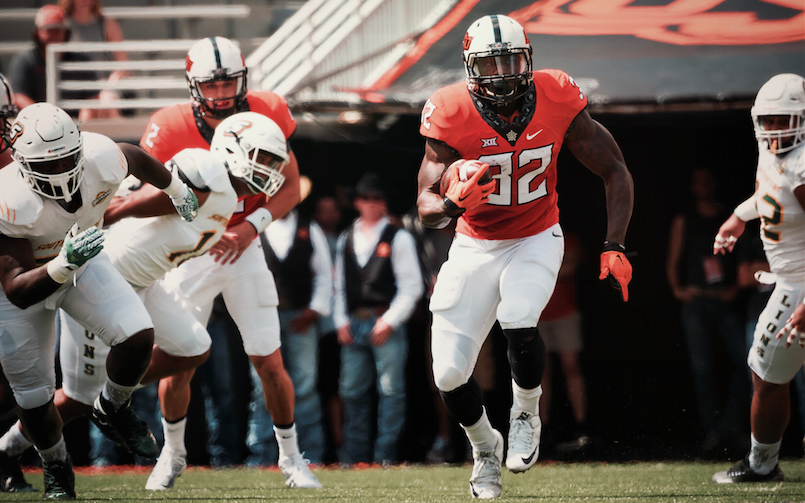 Former OSU running back Chris Carson shined in day one of the NFL Combine on Thursday with his monstrous bench press performance that finished just behind OU’s Samaje Perine for most reps.

Day two of the combine features prospects running around in skin-tight spandex and showing quickly they can reach top speed over a distance of 40 yards, and Carson once again proved why he might be a valuable addition to an NFL roster. Here’s where his 40-time stacked up among some of the big names, via NFL.com.

#okstate RB Chris Carson ran a 4.58 on his first attempt in the 40 at the #NFLCombine pic.twitter.com/Z3or1m5Rbl

It will take more than a fast time, but it’s worth noting that Carson achieved a respectable 40 time given his competition. Guys like Corey Clement of Wisconsin, James Connor of Pitt and even Samaje Perine all finished below him. And finishing in the same range as a guy like Leonard Fournette, who is sure to be a first rounder, can’t hurt the perception any. The two are semi-comparable in weight (Carson 218, Fournette 240) and running styles, and Carson held his own — and dominated in vertical leap.

While NFL scouts look at tape and production, they also take into account how prospects test. Which is why finishing in the top 20 in speed, and top 5 in vertical jump, is a big deal. Here’s the same prospects and how each finished in the vertical jump. For more testing results including the broad jump, you can see full combine results at NFL.com.