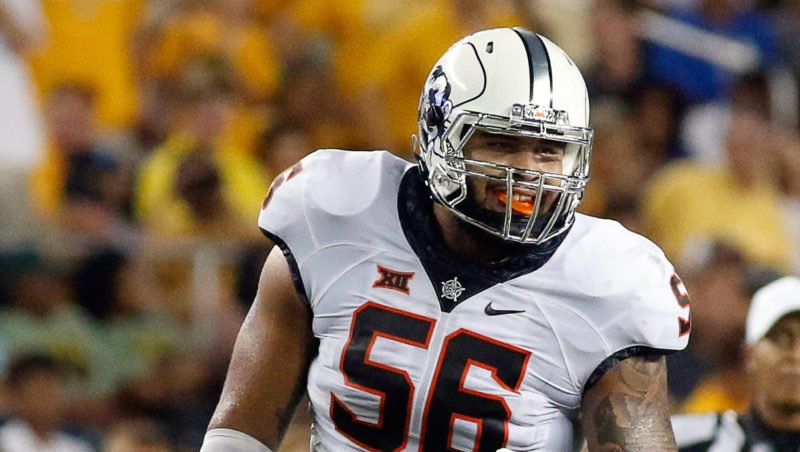 The Oklahoma State offensive line has taken plenty of criticism over the last three or so years — and for good reason. But around the halfway point of the 2016 season, the group finally began to hit its stride under the tutelage of Greg Adkins. The result helped contribute to the Cowboys most effective ground-game showing since 2012.

But “improved” is not “elite” and the unit loses two-year starting left tackle Victor Salako as well as Michael Wilson who has either been a starter or at least a key contributor at guard for the last three seasons.

During his post-Alamo Bowl press conference, Mike Gundy spoke about the loss of Salako and Wilson.

“It’s exciting to be around young men like that,” Gundy said. “We’re going to miss those guys, yes. Wilson has been a warrior for us. He ought to get a degree in kinesiology without even going to class with all the treatment he’s had, the medical help, the rehab. Then Victor Salako was awesome. What a great take for us to bring him in and start two years at left tackle. A great young man. Humble. Makes 3.5 GPA, is going to graduate, never says a word. Great family.

“But now we have to have two other guys step up. We have young guys in our program. What’s helped us is I think we’ve settled in on how we want to run the ball, more so than we have in those three years that weren’t very exciting running the ball.”

Two years ago, Adkins took over a bare cupboard in terms of depth, but he’s gotten the group this far. Let’s see who he’ll have to work with in 2017. As far as next year’s depth goes, I think there could still be some shuffling around, but this is a good place to start.

It’s possible that Crabtree — who has been the starter at right tackle the last two seasons — may move to the left tackle spot if the coaching staff is not as confident in Victor Salako’s would-be replacement.

Mason Rudolph is the Cowboys’ single most important player. They need to keep him off the turf as much as possible. Highly-touted JUCO transfer Shane Richards figures to compete with the likes of Matt Mucha, Dylan Galloway and Teven Jenkins for the tackle spot opposite Crabtree.

Marcus Keyes and Larry Williams should retain their starting roles at either guard spot with several other guys ready to compete for time like Lemaefe Galea’i and youngsters Matt Kegel and Johnny Wilson.

Brad Lundblade should continue as the starting center. We’ll leave Johnny Wilson as his backup for the time being.

It’s important to remember that Adkins is not opposed to moving guys around. Early in 2016, when the Cowboys were struggling in pass protection and the running game, there were several guys shuffled in and out of rotations before they found one that worked.

While the offensive line saw improvement towards the end of last season, the group gets even younger with the departure of Salako, Wilson and with the news of redshirt junior Brandon Pertile’s transfer from the program. And since the Cowboys only having one 2017 OL prospect currently committed with just two weeks until signing day, the pressure will be on Greg Adkins to hit on these young guys he’s brought in.

Gundy spoke about his desire to roll guys in and out almost like hockey line changes. This coming spring and fall are all about building continuity up front. Hopefully, the unit is working as one by September.