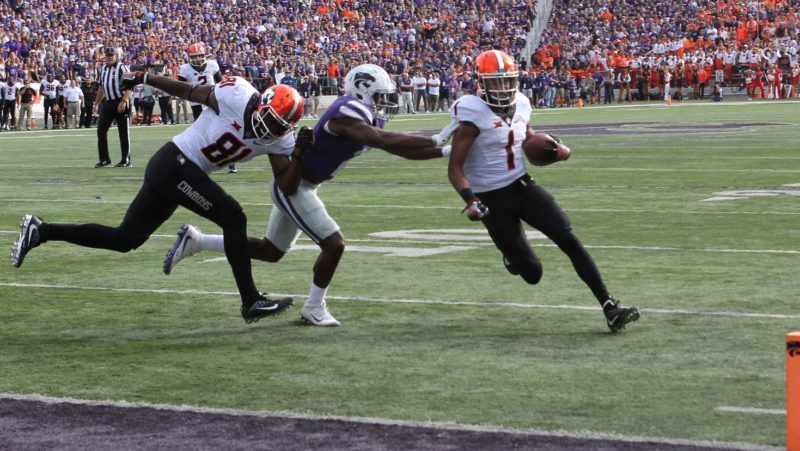 Well, this should be fun. The Cowboys normally deep and talented group of receivers may be the deepest and most talented ever in 2017. Mason Rudolph is back for his senior season — which makes all the difference in how they will be utilized. Plus Oklahoma State hosts all the big boys in Stillwater. Bring on #HomeMason.

So let’s take a look at the likely contributors and how the depth chart might shake out.

For the second-straight year, “The Prez” will be the leading returning receiver in the Big 12. His place among all-time Cowboy receivers is just a formality at this point. His unassuming demeanor and stature are no longer deterrents in coverage. Opposing defensive coordinators have nightmares about this dynamic catch passer.

Jalen McCleskey somehow gets lost in the shuffle when discussing OSU receiver talent, which is a crime. Coming into 2016, the big question was how the Cowboys would replace the production of super-slot mainstay David Glidden. Jalen McCleskey stepped right into that role beautifully and exceeded Glidden’s production.

During Glidden’s senior season he led the Cowboys in receptions (57), was second in receiving yards (866) and caught three touchdown passes. That very next year, as a sophomore, McCleskey led the team in catches (73), was second in yards (812) and scored seven touchdowns. He’s downright fast and elusive to boot. Who ever heard of a sophomore slump?

Ateman did not get to take part in the Cowboys’s fifth 10-win season in seven years due to an injury sustained in the off season. Once it became clear that Ateman would be a medical redshirt candidate, thoughts of 2017’s stacked roster swirled for Cowboy fans and coaches alike.

Ateman’s size and big-play ability make him a match-up nightmare for opposing secondaries and he will be out to finish his career on a good note.

If you don’t know who Tyron Johnson is by now, you’ll be pleasantly surprised by the Cowboys’ steal from Baton Rouge. The Louisiana State transfer has been quietly biding his time on the OSU sideline while he awaits his chance to make a name for himself — due to NCAA transfer rules. What’s not been quiet is the buzz coming out of Cowboy practices about the former five-star prospect’s athleticism and play-making ability.

Outgoing safety Jordan Sterns joined the pod this week and spoke about just how impressive Johnson has looked. And now I’m way too excited for this guy. In nine games as a freshman at LSU, Johnson had nine receptions for 150 yards and two scores. That made him LSU’s No. 3 receiver in yards that season(!). I have feeling he’s going to average more that one catch per game in this offense.

How many wide receivers are you allowed to start?

The highest-rated wide receiver prospect the Cowboys have had since Dez Bryant should be able to make an impact immediately. His star continues to rise thanks to an impressive showing at the Under Armour All-American game last month. The four-star prospect and 11th-ranked wide receiver in the nation per ESPN, spurned the likes of Michigan, Oklahoma, Oregon and Washington to join his twin brother Tracin in Stillwater.

Justice Hill wasn’t the only in-state true freshman that turned heads in preseason camp last fall. Dillon Stoner, the multi-position star from Jenks, seemed primed to make a splash in his first year but was unfortunately sidelined due to an early lower leg injury.

Stoner was the No. 1 wide receiver prospect from Oklahoma and 35th nationally but played all over the field. I’d expect him to pick up where he left off and get time at receiver and on special teams.

I went back and forth on Lacy’s spot below. He’s not beating out Washington, Ateman or even Johnson for starting reps on the outside but could be anywhere from second team to out of the rotation. That’s definitely not a knock on Lacy. It’s just an example of how deep this group is.

Lacy had his best season as junior in 2016, helping to fill in for sidelined senior Marcell Ateman, including back-to-back four-catch, 100-plus yard games. Now a senior, Lacy’s experience over some of the hotter names in the group should garner reps. It’s going to be a fun competition to watch for sure.

While most are excited for what Tylan Wallace will bring to Oklahoma State next season, the Cowboys other 2017 wide out is no slouch. Shamond “LC” Greenwood exploded on the scene after a highly productive senior season at Lakeview Centennial (Lakeview, TX) and is now a four-star prospect and the No. 32 wide receiver in the nation according to Scout.

The 6-foot-3, 200-pound freak runs a 4.41 40-yard dash and is a big play waiting to happen. He showed his star potential down the stretch of his senior season.

The former ESPN four-star athlete from Lancaster, Texas spent 2016 redshirting for Oklahoma State. He’s another gifted playmaker who will try to break into a stacked rotation. At his size, 6-foot-3 and 190 pounds per 247Sports, he could be another outside threat in the vein of Marcell Ateman and Jhajuan Seales.

Alexander is another freshman who impressed early last fall and was even reportedly expected to play last season. But it appears the coaching staff opted for an extra year under Rob Glass’ training program. Alexander will be another hungry mouth to feed for Mike Yurcich and Co.

A walk-on sophomore in 2017 who has the size to compete on the outside at 6 foot 3 and 200 pounds. As a true freshman he saw sparing reps and with an even deeper 2017 group, he will have to show out to earn meaningful time at receiver.

We used three WRs because, according to OSU’s participation charts, that is how many they “started” each game.

So, of course things can change between spring practice and preseason camp in the fall, but this is how I see things shaking out. The difference in “WR2” and “WR3” could be just a couple plays in such a deep receiving corps.

There are a couple of potential redshirt candidates in Wallace and Greenwood but I would expect both to play as freshmen. Mike Gundy simply doesn’t “save” guys if they are ready to contribute. It’s going to be a fun competition to watch and should result in plenty of fun plays on Saturdays.