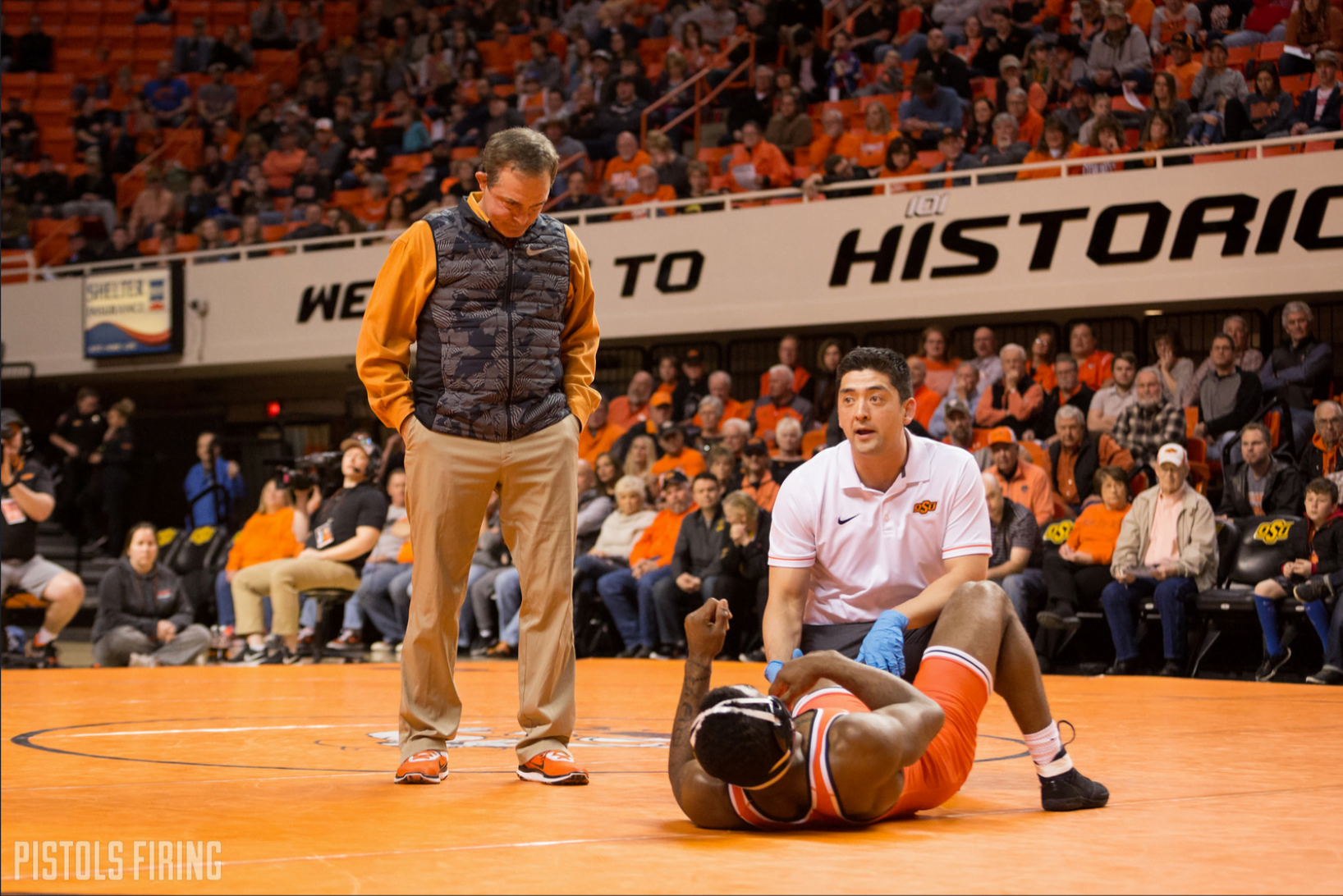 John Smith set a new personal precedent for angst and disapproval after Saturday’s victory against Northern Iowa. The Cowboys won 24-10, but Smith was so upset with his team that he talked to them for nearly 45 minutes before exiting the mat room to talk to the media. He specifically pointed out the fact that four of the 10 matches had scoreless first periods. Here are five takeaways from the dual.

John Smith wishes the world got to see a better dual. Unless you count the clash against Iowa on Jan. 5, which aired on the Big 10 Network, Saturday marked OSU’s first nationally televised dual of the season. The dual was broadcast on ESPNU, and ESPN banners could be seen throughout Gallagher-Iba Arena.

Mike Gundy made an appearance, but it wasn’t short-lived. Oftentimes coaches or celebrities will make brief cameos, but Gundy stayed for the entirety of the dual.

“I wish we could have shown a better match,” Smith said. “Not that it was bad. You just don’t want those 0-0 first periods. I just don’t see anything being good for that. Nobody wants to watch that. I don’t.”

2. Heil responds with his first victory since Jan. 21.

It has been a nightmare of a stretch for Dean Heil, a stretch that only winning will solve. He took a positive step Saturday afternoon when he defeated Josh Alber, who certainly isn’t a slouch.

Alber, the eighth-ranked 141-pounder in the country, boasted a 21-3 record entering the dual. The match was scoreless after the first period, and an Alber escape to begin the second put Heil down 0-1. That was the only point Heil trailed, though, as an escape and a takedown paired with riding time gave him a 4-1 victory.

“He needed to (win),” Smith said. “Those things aren’t easy, and you can lose again. I’ve seen it happen.

“He’s won a lot of tough matches like that, and that’s what he needs to remember.”

Chandler Rogers looked like a sure bet to cruise to his third consecutive victory, especially after gaining a 4-1 lead against an unranked opponent. However, his opponent, Daniel Kelly, trimmed the lead to 5-4 in the third.

Rogers saw his riding time diminish as the clock approached 0:00 but was called for a stall warning. He was called for stalling again as the buzzer sounded, sending the match into sudden victory. Rogers wasted no time reestablishing his dominance, though. He got the match-sealing takedown seconds into the extra period to give the Cowboys a 17-3 lead with four matches to go.

4. Jacobe Smith is still banged up

Jacobe Smith weighed in Saturday but didn’t suit up. Instead, it was Hestin Lamons on the mat for the Cowboys. Lamons lost his match to No. 7 Taylor Lujan, 7-4, but Smith’s health going forward remains the bigger story. John Smith diagnosed his wrestler’s wound as a minor leg injury and said he shouldn’t miss much time. That happened against Missouri on Jan. 27. I saw Smith after the dual and he seemed to be limping a bit. Hopefully he can heal up soon. He’s one of the most entertaining wrestlers the Cowboys have.

5. Piccininni and Brock, per usual, set the tone to start

Beginning with a victory is important for momentum morale, and that’s exactly what Kaid Brock and Nick Piccininni have done at the beginning of duals this season. Piccininni, facing No. 20 Jacob Schwarm, seemed to have no trouble after giving up an early takedown. Piccininni responded with 12 unanswered points to give the Cowboys a 4-0 lead. If you count his forfeit victory against Missouri, Piccininni has given OSU 20 points in his past four outings. That’s big-time.

Brock has also impressed. He only has two losses this season and hasn’t suffered a loss since December. He picked up a 14-6 major decision of his own to give OSU an 8-0 cushion to start Saturday’s dual.