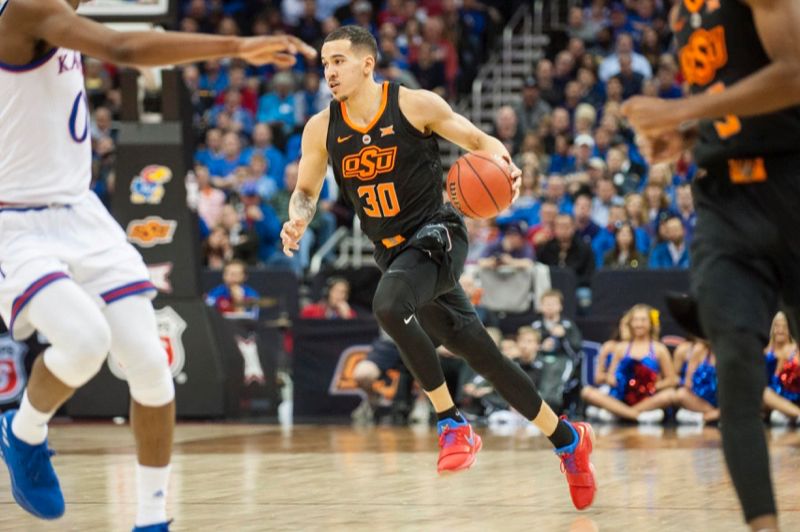 Oklahoma State’s three-game Big 12 winning streak came to a thudding halt in Kansas City on Thursday as No. 1-seeded Kansas took down the Cowboys 82-68 in the quarterfinals of the Big 12 Tournament. OSU faded late as Kansas’ fresh legs took over, and now the Pokes will have to wait until Sunday to figure out if their resume is good enough for the big boy tournament.

Jeffrey Carroll paced OSU with 17 points, while Kendall Smith had 14 and Yankuba Sima (!) tossed in 11 of his own. OSU shot a disastrous 31 percent in the second half, including 0 percent from 3-point range and could not come close to pulling off the three-peat over the Big 12 champs.

Malik Newman had a (big surprise) career-high 30 for Kansas, who was without star big man Udoka Azubuike. Big 12 Player of the Year Devonte’ Graham added 10 points, 4 rebounds and 9 assists, and Svi Mykhailiuk had 13 points on 5-of-10 shooting.

It was a bummer of an ending for the Cowboys, who would have locked up a NCAA Tournament bid with a win but now must await their fate with the rest of us on Sunday afternoon.

Here are five thoughts on the last Big 12 game of the year.

Whoooo boy that first half made me weak. Kansas shot 54 percent and led by just 1 point going into halftime. You know KU fans were sweatier than the space between Bill Self’s mop and his dome, and OSU fully looked the part, hitting 5 of 12 from deep and posting a heart-pounding 1.2 points per possession.

I’m not a huge fan of the eye test, but that first half felt like a legit Sweet 16 game. I know the selection committee can’t watch every game from every conference, but I don’t know how you watch that first half with a team that’s already beaten the Big 12 champs twice and say, “nah, we’re good, they can’t ball in our tourney.” That’s just not a thing I can envision anyone who watches sports, much less basketball, uttering.

Honestly, Kansas sort of tried to give that game away in the second half. They turned it over on 20 percent of their possessions, missed free throws and looked genuinely disinterested in sealing the deal. But OSU had nothing left. They looked like what I imagine the football team looks like after a mid-March session with Robert Glass. Wobbly legs led to an 0-for-10 mark from 3-point range in the second half and just a 60-percent mark from the free throw line.

OSU scored just 4 points from 18:28 to 7:03 in the second half, and closing time for Kendall Smith, Lindy Waters and Co. turned into “please eat at our restaurant the entire evening and leave the door open on your way out because we’re too tired to shut this thing down.” That’s not the worst thing in the world you can say about a college basketball team, but with all eyes on the Pokes given the dissension about their NCAA Tournament resume, it wasn’t the best timing, either.

Also, it’s total ?? you make a team from the opening day play in the morning session the next day

One other note on this: It took OSU 17 shots to make their first 11 buckets. It took them 39 more to make their next 11. Not great!

3. Too many easy buckets

In their first two meetings it was Oklahoma State that took advantage of Kansas’ turnovers. This time it was the other way around. OSU turned it over just 13 times, but Kansas scored 20 points on those turnovers (because a lot of them were involved poor decision making on the perimeter).

KU got out and ran the same way OSU did in wins at Lawrence and Stillwater, and OSU, for a variety of reasons, did not have any answers.

Oklahoma State got 18 offensive boards — led primarily by Solomon (4) and McGriff (5) — and as a result took nine more shots than KU. However, they made five fewer.

While we’re here, how much fun has McGriff been over the last few weeks? He looks the part, even against a monster like KU. Even though he faded a little bit on Thursday, his last two years in Stillwater are going to be a blast.

Cam McGriff is going to be on a LOT of preseason All-Big 12 teams next year. #okstate

I don’t think it is. That sounds crazy, I know, but I think for a team to become (by far!) the lowest-rated RPI team in NCAA Tournament history to get into the tournament (OSU will end in the mid-80s and No. 71 is the lowest ever) its body of work would have to have been more unique than this.

I’m not saying I agree with this — in fact, there are tenants of North Korean government policy I agree with more firmly than this — but I don’t think the committee is progressive enough to get outside its archaic way of selection March Madness teams.

The bright side? Maybe OSU will go down as the athletic program to end the two most ridiculous selection templates in all of college sports (the BCS and the RPI).

I hope I’m wrong, but I don’t think I am. Either way, Sunday afternoon is going to be all kinds of tense.

Win or lose, I don’t know how anyone paying attention can say this #okstate team doesn’t belong in the NCAA tournament.

Debating against their schedule is nonsensical. They scheduled Texas A&M, Wichita State, Florida State, Tulsa, Pitt and Arkansas. Yet we’re debating their 6 worst wins instead of their 6 best. That’s so crazy.