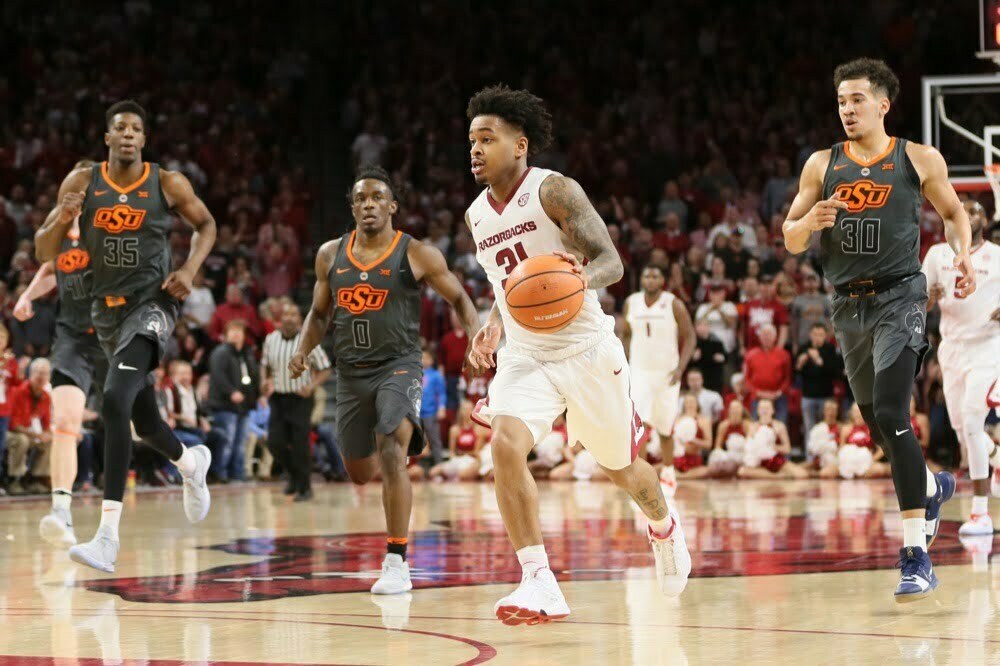 It’s no secret that Oklahoma State is 0-5 in true road games this season and that it’s currently costing the Pokes a shot at the NCAA Tournament. It’s also no secret that in four of those five games, the Cowboys have led going into the locker room. The numbers are still startling, though.

As I looked back over all five games, the numbers that really stood out were second-half 3-point percentages on both sides. Here are the splits of OSU’s five road games against OU, Kansas State, Baylor, Texas Tech and Arkansas.

OSU is — on average! — 15 points worse in the second half of true road games this year. Fifteen! Here’s a look at shooting percentage differences.

That doesn’t really tell us what we’re looking for. OSU is actually being out-shot in the first half of road games, and that gets bumped slightly in the second half of games. Now, here’s the good stuff. Or the bad stuff, depending on your perspective.

OSU is not a great 3-point shooting team, and it is getting bested by 8 percentage points in the first half. That’s not good. But it’s spectacular compared to what the Pokes are doing in the second half. There they’re getting walloped by 25 percentage points. When you’ve lost three games by five or fewer points on the road, that makes all the difference in the world.

I think this reveals that OSU is both not as defensively sound as it would like to be and not as deep as it should be. In other words, I think they get tired in the second half of games for a variety of reasons (on Saturday because they were without Tavarius Shine and Kendall Smith). This can be seen in their inability to make 3-pointers as well as their inability to defend the perimeter.

Mike Boynton obviously knows this is a problem in general.

“It’s not like we’ve found this great rhythm and consistency playing on a night in and night out basis,” said Boynton after beating OU in GIA a few weeks ago. “We haven’t figured out this road thing yet. We don’t get to play any NCAA Tournament games in this building unfortunately.

“We have to go prove that we’re capable of going and finding a way to win on the road.”

After that OU game, OSU lost by five to Tech and one to Arkansas. Both are NCAA Tournament teams. Both would have been big wins. So they’re … getting closer, but they’re not quite there yet.

“We just didn’t play well enough for 40 minutes,” Boynton said after Tech. “What I will do is give (the Texas Tech) staff credit for even though they struggled for two games and didn’t play well for 20 minutes to keep those guys in the right frame of mind knowing that there would be a lot of opportunities for them in the second half.

“I am not going to sit here and act like my team didn’t play well enough to make them not play well in the first half. I think we had a lot to do with that. Credit to them for coming back and fighting the way they did.”

One of the issues (obviously) is depth. OSU played just eight scholarship players against Arkansas on Saturday, and as I noted above, it’s tough to keep guys fresh throughout. Still, that can’t account for all of the second-half dropoff. Plus, OSU held Arkansas to just 3 of 12 from 3-point range in the second half. The issue on Saturday was on the offensive side without Shine and Smith.

NO moral victories here. Proud of our guys, but we have to learn to finish better. We are getting close. Thanks for all who showed up in orange today. Hope to see you all in GIA on Tuesday. #GoPokes #RT10

In his press conference after losing to Arkansas 66-65, Boynton noted that well-coached teams (like Arkansas) win close games. OSU has done that at home thus far but has failed to do so on the road. I think Boynton is a good coach, but I also think he needs to start winning at least some of these games. Part of it at least looks like it’s going to start with playing better perimeter defense in the second half.

OSU’s last five road games will all be monsters. At Kansas, at WVU, at Texas, at TCU and at Iowa State. One win out of those five would be big. Two would be a roaring success. There hasn’t been much about the last month, though, that speaks to OSU’s ability to close out in these situations. Maybe that starts against one of those five teams. It’s going to have to if they want to make it back to the NCAA Tournament.