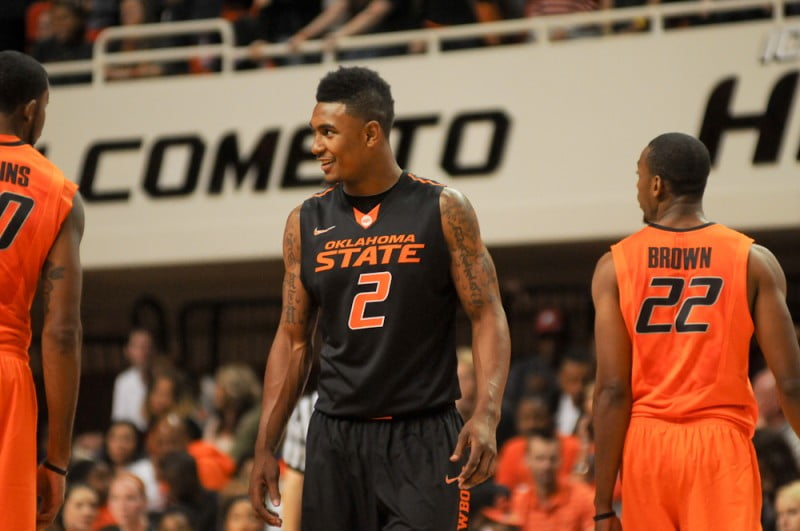 Nolo and I exchanged emails after the UC Davis game but before Marcus Smart started doing Marcus Smart things in Puerto Rico. Hope you guys enjoy.

Kyle Porter: Another year, another injured and potentially-not-well-coached team…and yet every time I get sucked in. If the Billy Donovan/Mark Few discourse means anything (and I’d like to think in college basketball circles it should) OSU could run Marcus Smart out there with four players from the girls team and flirt with the tournament. But the question persists, are we putting too much on the shoulders of a freshman (one from your alma mater no less!)?

Nolan Cox: As a fellow OSU Cowboy and Marcus Marauder I’m admittedly a little bit (okay, a lotta bit) biased, but he’s the real deal. A lot of people got frustrated with Nash’s inconsistency as a freshman last year but Marcus is different in that he doesn’t have to score to be the best player on the floor.

He has an unselfish, defense first mentality coming in which is contagious and nearly impossible to teach a true freshman (unless your name is John Calipari). When you see a guy going that hard at all times, especially when it’s a guy who’s been as hyped as he has, you feel like you’re cheating him by not going as hard as he does.

He’ll lead us to the tournament if we stay healthy. Okay, my Marcus Smart gush-fest is over. Time to move on to the real question marks. Gun to your head (insert Oklahoma open-carry law joke here), who leads the team in scoring, who is our best player off the bench, and who is the first guy to get arreste..err..who is the biggest disappointment?

KP: Leading scorer has to be Nash — I think in a lot of ways Smart will be the best thing that happened to him. Smart is going to demand defensive looks, drive the lane, and find an I’m-just-chillin-ovah-here Nash for buckets more times than Ford and Monken are going to say the f-word in 2012 combined. I’m fired up about it.

Smart is going to be a catalyst — a real one, not a faux one like we’ve had with Markel the last two years. Speaking of Markel, he’s going to be texting NBA GMs (is that legal?) bedowngrading things about Smart all year just so he can get another year with him because he’s gonna get ALL the oops this year.

Our best player off the bench is…………….uh……………..Soucek? Is this possible? I guess I could be talked into Forte or Gardner too but man that thing is thinner than Kate Moss on a juice fast.

What if your brother is the first player to get arrested, thusly tainting the Cox family legacy at OSU? On a scale of 1-Saban after a loss, how pissed would you be?

NC: Any publicity is good publicity, Kyle. If Mason gets arrested for drunkenly punching out some Sigma Nu at a house party I probably won’t be too upset.

I completely agree about Smart being the best thing that’s ever happened to Nash. Not only because Smart will get Nash will get a lot more buckets off open looks, but because he’ll also make Nash a much tougher competitor. I bet by the end of the season they’ll be cropping each other’s mohawks.

The reason I’m so excited about this team is because we’re finally back to having a point guard who is able to distribute so guys like Forte/Nash/Brown/ect. won’t be stuck trying to create their own shot like they have the past couple years when Markel and Keiton played out of position at the point.

Forte will be able to camp out in the corner with his baby face and rolled up shorts and just bury threes like Keiton did his freshman year when Byron was running the show. And yes, Markel will be getting ALL the oops.

Speaking of Markel and Keiton, they must have hung out quite a bit this summer because Markel’s jumper is about as pretty the Gamma Phi house on bid day right now. He will be our second best 3 point shooter behind Forte this year and will compete with Nash to lead the team in scoring. Mark it down. [Kyle takes a shot of Makers to calm himself down].

The biggest problem right now is the bench. Soucek has always had a silky smooth J, but he’s much tougher than last year and should be our most improved player. The problem is I don’t know who else beyond him and Forte will provide quality minutes. The biggest X Factor is JPO. He’s talented but extremely inconsistent.

I realize it’s tough to guess the severity of his knee injury, but it always seems to hurt worse when he gets beat op D or turns the ball over. I mean it’s not like he Shaun Livingston’d it (I would provide a link but I don’t need people throwing up halfway through this post). The other guy I like off the bench is Sager. He can lock up on D though and knock down an open shot. I like his game.

KP: You and I were both at the UC Davis game on Friday night and I think we’re both a lot more optimistic than other people who weren’t there. UCD wasn’t half bad and Smart blew us away. He’s so intrinsically gifted you almost don’t appreciate everything he does unless you see him in person. Opposing coaches, players, and our own fans are going to be raving all year. Orange Jesus is here.

I agree with you about JPO, sometimes I’m not totally sure what he and Nash bring to the table. They kind of linger, like a set of overwrought in-laws, and don’t really offer anything positive to the situation. I’ll be interested to see how they start flowing with Smart leading the way.

As for Forte, I’m going to be totally irrational for a second but what exactly is the difference between him and Keiton? Besides the fact that he rolls his shorts (which Keiton should have done) we’re no longer inanely structuring our entire offense around the short, white guy in the corner? I’m all in on Smart and Forte who, by the way, need a nickname.

I propose Crockett and Tubbs but I’m open to suggestions.

NC: I’ll leave it to the PFB readers to come up with a nickname for those two but you’re right, they need one.

Everything we talked about leading up to the UC-Davis game came to fruition. Smart’s 7-1 assist to turnover ratio was the main thing that jumped off the page to me as far as stats go.

Like you said though, you have to see him in person to fully appreciate it. You don’t see things like the 1 handed no-look assist off a rebound for an open dunk when you see 7 assists on a stat sheet. You also tend to forget he was playing point guard when you see that he lead the team with 7 rebounds unless you’re at the game and see the way he crashes the glass.

There’s also no column on the stat sheet for walking on water or healing people which makes him tough to appreciate unless you see it in person. Okay I made the last part up (or did I?) but seriously, if a guy like this can’t fill up GIA, we’re not filling that place up any time soon.

We’re one game into his career and you’re already comparing Phil to Keiton. I’m surprised it took you this long. They are very similar and both good players but I think Keiton had a little bit better handles than Phil does at this point which allowed him to create his own shot easier than Phil can.

On the flip side of that, I think Phil is a better defender and might be a better pure shooter than Keiton [ducks as debris and insults are thrown at him]. Not to take anything away from Keiton’s high school carrer (which was spectacular) but Phil won two 5A Texas state titles against much stiffer competition and was MVP of the state tournament his senior year over *gasp* Marcus Smart.

People acted like he wouldn’t be playing high-major ball if we hadn’t recruited him but that couldn’t be further from the truth. Texas Tech has to field a team some way or another! (Kidding. Kind of.)

I’m not sure how many people read your article about the no-position offense but it looks like you were pretty spot on.

There were plenty of stretches where Nash was the tallest guy on the floor and we just sent the 5 guys playing the best basketball out there. There was a couple times it resulted in a busted play because it’s tough to learn 5 positions, but this is just the first game. I fully expect to see it quite a bit this year, I’m just hoping we’re deep enough to pull it off.