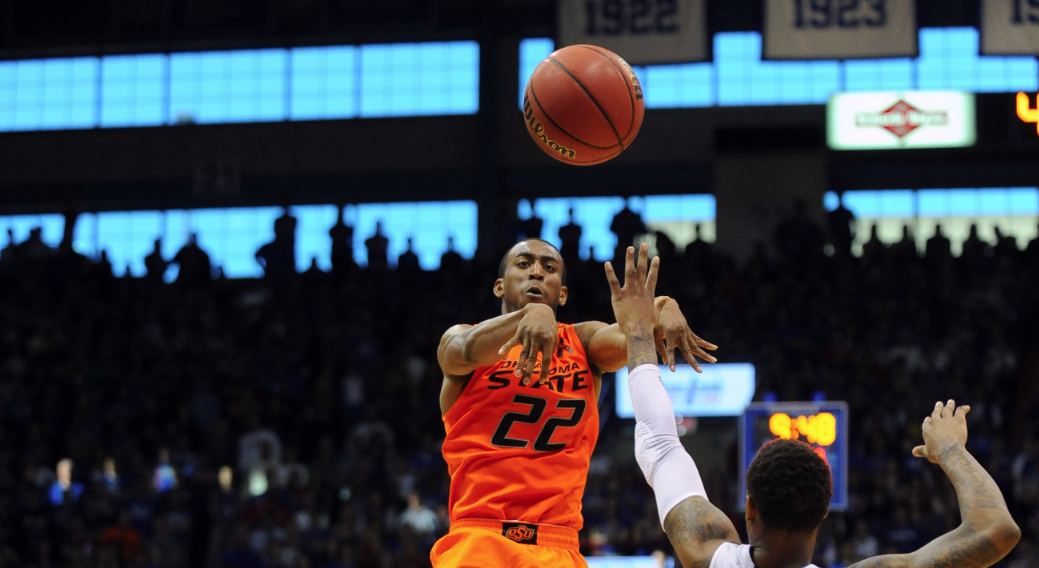 It’s not a lost career but it’s something close.

Amidst the last two years of riding the roller coaster with Travis Ford and Marcus Smart and everyone (myself included) shouting from the mountaintops that Ford should be canned, I don’t think we fully appreciated the entire Markel Brown Experience.

On statistics alone Markel is one of the 10 best four-year basketball players in Oklahoma State history.

I mean look at these numbers.

The great thing about Markel, though, wasn’t the way he turned stat sheets into power ball tickets. It was the way he flipped Gallagher-Iba from a ghost town relic into the buzzing organism it should be — he made it louder than the loudest place you’ve ever been.

My favorite thing about Markel was that at some point in his first two years of school he realized that despite his rare gift of being able to leap higher than pretty much anyone else in Big 12 history, his calling card would be that pull-up jumper from 19 feet.

Lots of guys never realize that. They bank on air and hope it keeps them floating for the rest of their careers. I mean look at the list of highest verticals in pre-draft history. It’s a roll call for folks who could leap but never soared in the sport.

Markel understood that he was more than a sideshow. He was a basketball player.

And he was a good one, probably a great one.

There he is loading up against KU at home his senior season and there he is on the road in Lawrence his junior year. Four of his 21 total 20-point games came at the hands of the ‘Hawks.

A Jayhawk killer, Bill Self noted sternly, with respect.

It was Markel who was a rock all of his senior season. Ford called his number over and over and Markel almost always had an answer. He played 626 of a possible 665 minutes in the last 16 games. He was worn down by the end and yet put up double-figures in all but two of them and notched 20+ in seven.

He was the guy you could always count on. How about this? He played in 134 of 134 games in his career. He never missed one due to injury, never sat one out as a freshman, and never got suspended.

When I think of college hoops I don’t think of guys like Marcus Smart. Stillwater was always a gas station off the highway for Smart — a place to stop, fuel up, get some food, and stretch his legs before continuing on the long road ahead.

For Markel it was everything — it transformed him from a child to a man.

And we got to watch.

That’s the best part of college athletics to me. Watching children grow up and coming to understand the place basketball (or football or baseball) has in their lives.

“I had fun my four years here, playing in front of that crowd,” Markel told the Oklahoman. “Playing with teammates who grew into brothers. Bonding with them every day. I’m going to miss it a lot.”

Markel was my favorite Oklahoma State player since probably Mo Baker. I loved the 13s he wore and the authority with which he dunked and the way he cared about defense and how the No. 22 seemed to mean something to him. It’s going to be tough to watch games without him out there.

What I loved most, though, was that buttery jumper he developed between his sophomore and junior seasons.

The first time he let it fly his junior year I almost fainted onto my keyboard. Markel always had the highest release point in the gym but the fact that he actually did what Marcus said he was going to do — improve his J — impressed me all the more.

It felt automatic, too. Coming off that high screen with his man a half pace behind him. It felt like it was going in every time.

And he’s going to miss us watching him, too.

“It was very emotional,” Brown said about his last game in GIA. “I’m sure it’s going to hit me even harder a week from now. I thought about it a lot, this is going to be my last game ever in Gallagher-Iba. It’s kind of heartbreaking.”

We might look back on the Sean Sutton/Travis Ford Era as the lost years of OSU hoops. Our wandering in the desert years. Our time to know what it feels like to play non-football sports at OU.

But Markel was always the spring from which we drank. Not a mirage, mind you, but a link from the past — the hard-nosed, badass past of OSU hoops — to the future, whatever that might be.

Markel Brown was probably the only player of the Ford Era who could have worn those old Defense/Discipline shorts Eddie used to hand out.

Markel Brown was a tremendous college athlete who emptied himself in every game. He came to Stillwater a wide-eyed 18-year-old and left even more wide-eyed. Not in wonder, but in disbelief at how fast it all went.

Markel Brown, ultimately, was a steal and a fast break — the hard work behind him and a canvas in front of him. There he is with one last dribble and a gleam in his eyes and a half-crooked smile leaping, skying, going impossibly higher…

I don’t even know what the painting looks like because I liked that blank canvas far too much.