Most (maybe all) would concur that, yes, we are. And the graphs below would not deter that way of thinking. I find it interesting, however, that of the big four sports (I don’t count wrestling because there are only four Big 12 teams), baseball has actually had the highest average conference finish since it began in the 1996-1997 school year.

As you can see, football had largest variance from the norm, while golf and basketball finished below their usual spots. 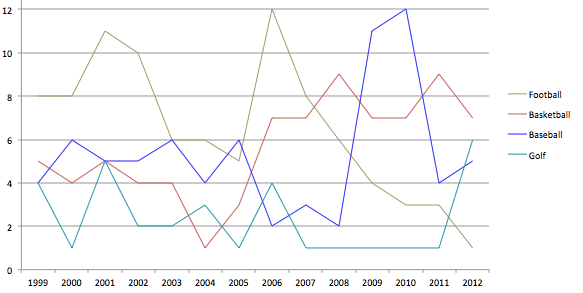 (Where OSU finished in conf play by year, obviously high is bad and low is good)

Football and basketball are headed in opposite directions (both statistically and anecdotally) and basketball actually hasn’t finished higher in conference than football since 2007.

(this is the combined average finish of big four sports)

In terms of the combined conference finish of these four sports, this was an average Big 12 season for OSU, though many would deem it great because of the BCS win and the fact that football > all other NCAA sports combined right now.

I think OSU fans feel like they’re on top of the sports world right now, and I guess that dependes on how heavily you weigh football to other sports, but these charts (especially the last one) would say otherwise.

I don’t want to detract from what was a really fun 2011-2012 school year, but I also don’t want us to forget where we came from.