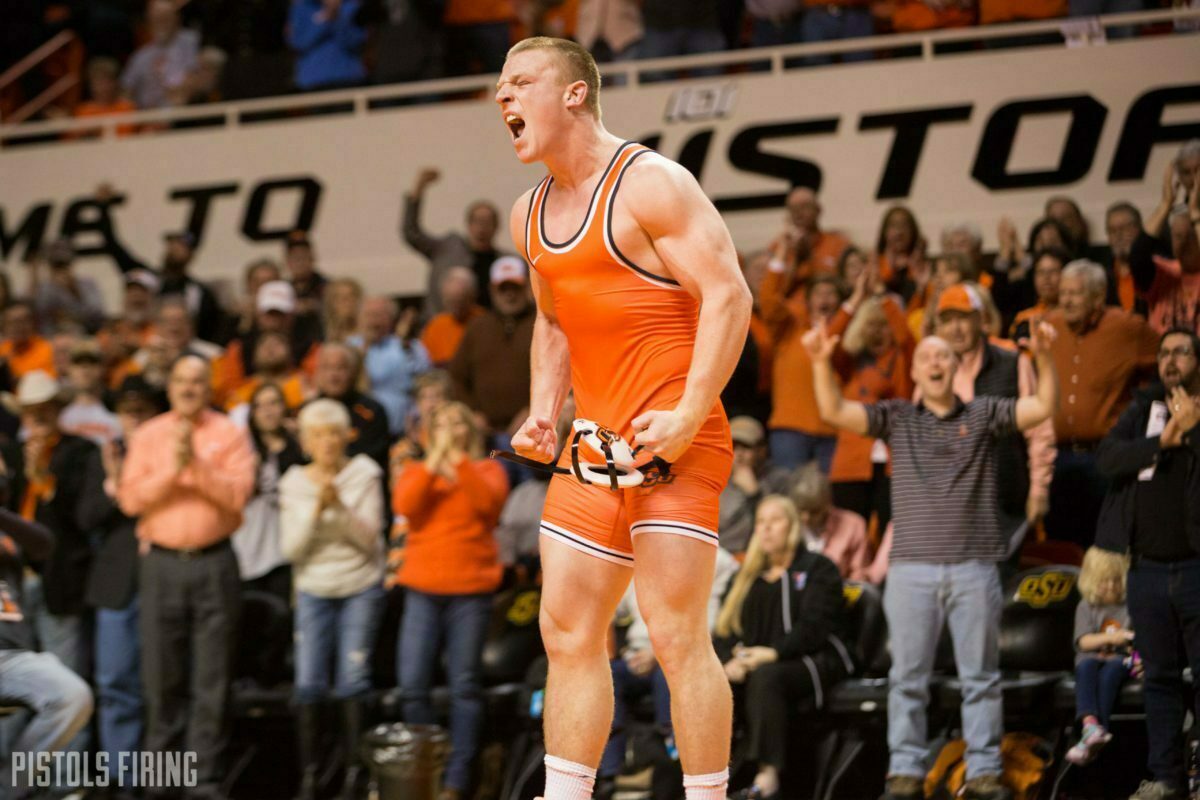 Say what you want about any other sport; Oklahoma State owns Oklahoma in wrestling.
That is an indisputable fact, and the fifth-ranked Cowboys proved that Sunday afternoon with a 31-6 Bedlam victory in Gallagher-Iba Arena.

Fans took advantage of their last chance to see OSU’s wrestling team this season. Much has been made of the lackluster attendance for basketball games, and the same could be said for wrestling. OSU isn’t the No. 1 powerhouse fans might be accustomed to, but it still boasts one of the best lineups in the nation, and John Smith is as entertaining as a coach there is in the country.

Whether it be because of Senior Day, Bedlam, or both, 5,798 fans showed up in full force, and they were engaged throughout. Mike Boynton stopped by and gave a wave to the crowd, and he received a standing ovation. Here’s to hoping he gets a similar effort from fans as the season comes to a close.

Not only was it Bedlam, but it was also Senior Night for a few Cowboys. Dean Heil was one of them, and his final match garnered a standing ovation. Heil looked dominant early, nearly pinning OU’s Mike Longo. Longo avoided premature defeat, but Heil persisted.

Up 10-3 entering the third period, Heil scored a pair of takedowns, including one as the buzzer sounded to clinch a 15-6 major decision. Heil soaked up his final moments on GIA’s orange mat, blowing a kiss to the crowd and waving.

HIGHLIGHT | Dean Heil finishes off the major decision for his final match at GIA! #okstate pic.twitter.com/yOhWYbnkLJ

Heil said his dad was in town Friday, and remembers telling him it hadn’t hit him that his final home match was approaching.

“It really started to sink in going into the dual today,” Heil said. “A lot of emotion. I’m done.”

The Cowboys haven’t wrestled outside the confines of GIA since their dual against Iowa on Jan. 14. They had eight home duals this season, and seven of them came consecutively. Having seven straight duals at home without travel is something Smith said he doesn’t want to see again.

“I don’t think it’s any advantage for us, by any means,” Smith said. “It’s too comfortable. Something about being too comfortable, it just kinda felt that way. You won’t see that again. Schedule just got kinda tricky on us with just one Bedlam and also going to Italy. But I think we struggled a little bit through the last month just because it was too comfortable. It’s too comfortable at home. You don’t want comfort.”

A pair of ranked Cowboys in the upper weights remained on the bench Sunday afternoon.

No. 14 Jacobe Smith and No. 5 Preston Weigel, who’ve combined for a 23-5 record this season, are out for the foreseeable future. On Friday, John Smith said not to count out Weigel for Bedlam and said to expect Jacobe Smith at 100 percent at some point this season. However, he provided some additional insight to their availability. Interpret it how you wish.

Redshirt freshman Keegan Moore lost five of nine matches heading into Sunday’s dual, but he erased any bad memories with one of the most exciting moments of the dual. It only took 40 seconds for Moore to take down Matt Waddell and earn the pin, sending the crowd to its feet.

A look at the final results.