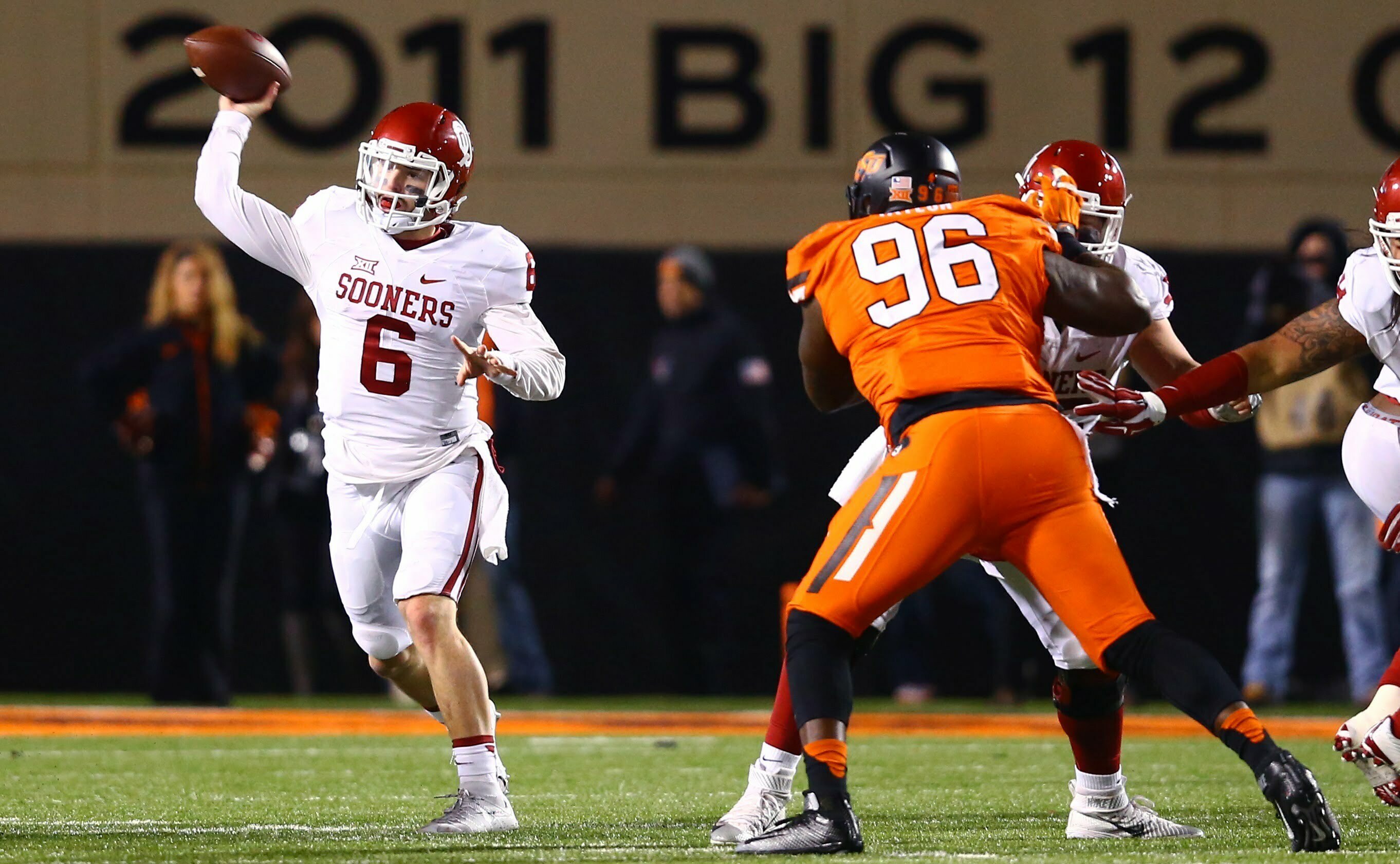 OU whipped West Virginia in Morgantown on Saturday night 56 to 28 to move to 8-0 in the Big 12 this year. That leaves us with the following Big 12 records for the top three teams:

You know what that means, right? Yes, Bedlam on December 3 in Norman is the Big 12 championship game. In fact, here is every Big 12 title scenario. All of them. Right here. I made a huge spreadsheet of all the ways the Big 12 can play out over the final two weeks.

There they are. Whichever team takes Bedlam, takes home a Big 12 trophy and probably a fifth-place finish in the CFB Playoff rankings (weeee!)

The humorous part here is that if this was next season, the actual Big 12 title game would follow Bedlam and be a rematch of Bedlam no matter what happened in Bedlam. Good job, good effort, Big 12!

That’s next year, though, and this is this year. And did you know that this is the fourth de facto Big 12 title game Oklahoma State will play under Mike Gundy since the Big 12 moved to 10 teams back in 2011?

Here are the other results:

Here are all the other teams that have played de facto Big 12 title games in the final week of the regular season with the outright conference crown on the line since the conference moved to 10 teams in 2011.

Of course, they don’t mean much unless you close. And if Saturday’s rout of TCU was any indication, Oklahoma State is in a far better position this year than it was last year to get that done.

“I like where they’re at,” said Gundy on Saturday after the game. “They train 342 days out of the year to get to this point. It’s their team. It’s been a heck of a transition from [earlier] in the season.”

It really has been a revelation. From the OSU squad that “lost” to Central Michigan on a Hail Mary to this team that looks like it can go to Norman and ball with Bob Stoops’ smoking Sooners, I’ve enjoyed the ride. So has Gundy.

“I know we’re healthier,” said Gundy. “Our team is playing with a lot of confidence. We’re going to play a good team. We’re playing a team that’s hot right now. They’re playing really good. Very active on offense. Looks to me like they’re playing better … on defense. It will be a great challenge for us.”

As for that lingering backdoor playoff berth?

“Nobody will ever convince me we didn’t get the win,” said Gundy. “I know Kirby had mentioned the committee feels a certain way about that game, but I think Kirby is playing poker and they see us as a 10-win team. That’s just my opinion.”

I could not be more fired up for December 3. OSU is playing some of its best ball of the year. OU will enter on an eight-game winning streak. Dede Westbrook and James Washington will flex to see which is the best WR in the Big 12 (and maybe the country).

The Mason Rudolph-Baker Mayfield bromance will be rekindled. Justice Hill and Chris Carson will try to usurp Samaje Perine and Joe Mixon as the Big 12’s best duo. Mike Stoops and Glenn Spencer trying to out-emote one another in the press box.

The Mullet vs. Big Game Bob for the whole dang thing.

It should be an all-timer.