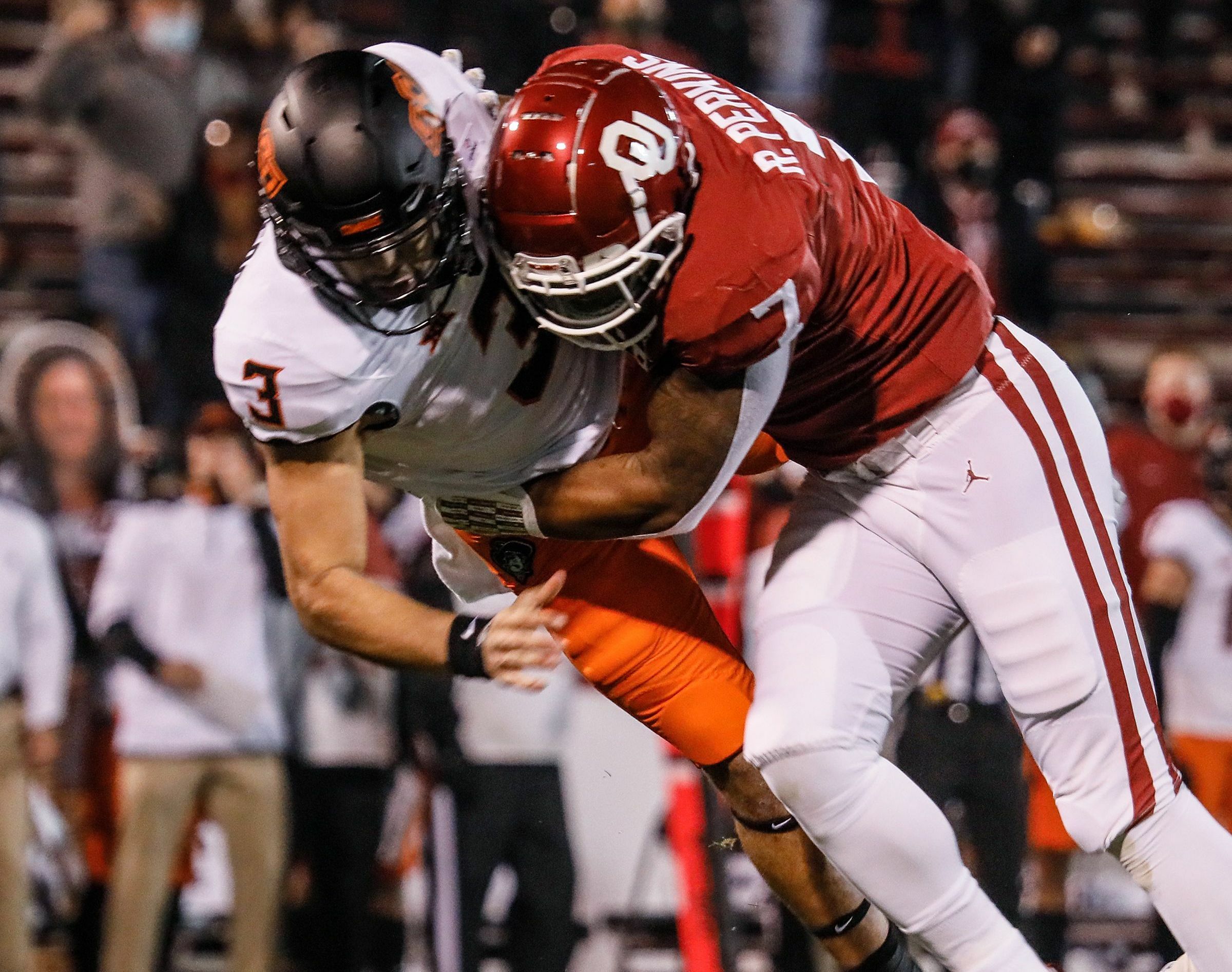 Oklahoma State fell behind by 21 points in the blink of an eye on Saturday against rival Oklahoma, a hole deep enough to bury even the healthiest and talented of teams in college football. The Cowboys battled back to end the half and showed life early in the third quarter, cutting the lead to within two touchdowns. But OU’s offense — combined with the lack of OSU’s offense — paved the way for the Sooners to claim a decisive 41-13 victory.

Here are our grades from the game.

OSU welcomed back starting linemen Jake Springfield and Hunter Anthony after an absence from injury. But falling in line with the fate of this bunch all season, the injury bug cropped up again. Starting tackle Teven Jenkins went down early with a hip injury and did not return, and it’s unclear if Springfield, who struggled all night in protection, was 100% healthy. Either way, it was a shuffling act all night once again for offensive line coach Charlie Dickey, and the results weren’t great. The team rushed for a season-low 78 yards and gave up four sacks and seven tackles for loss. The only saving grace is that the quarterback, by and large, was kept upright throughout most of this one.

An early injury to Spencer Sanders thrust freshman quarterback Shane Illingworth into action, and while Sanders did return, Illingworth got plenty of run.

Neither gunslinger was particularly effective.

Illingworth’s first drive resulted in a touchdown as the offense showed life, but he finished the night completing just five of his 21 pass attempts before Sanders, who according to the Cowboy Radio Network sat for an extended period due to a coach’s decision, eventually came back in. Sanders found some success moving the ball down the field but it was when the game was well out of reach in garbage time. He finished 10-of-19 passing for 97 yards, no scores and an INT.

This was a whiff on my part. I really thought with OSU’s offensive line getting healthy and with a bye week to rest and recover, that OSU’s rushing attack would play a big factor in this one. In addition to OL injuries, Chuba Hubbard was battling an ankle ailment of his own. He finished the night with 44 yards rushing on eight attempts. LD Brown had 23 yards on a team-high 10 attempts. Dezmon Jackson had 26 yards rushing on three attempts. Ugly, ugly, ugly. The offense really couldn’t find a rhythm all night, but that was just as much a byproduct of struggles in the running game as it was with quarterback play.

In a perfect world — and perhaps a fairy tale — OSU’s defense overcomes OSU’s ineptness on offense. But as good as OSU’s defense has been, and was against OU, it ain’t the 1985 Bears. This unit had some nice moments, but in total it gave up 492 yards of total offense, 41 total points, and 301 yards through the air on only 17 completed passes. Chunk plays, time and again, absolutely did this defense in. Swing passes, deep bombs, dump-offs were all given up at various points throughout the game. Fine performance for a normal OSU defense, not so much for one dubbed as one of the best in program history.

In relief of injured place-kicker Alex Hale, Brady Pohl made both field goal attempts — from 38 and 37 yards — in this game. That was good! And kick returns were good, too: Braydon Johnson had six returns for 130 total yards. But there was nowhere in this unit that gave much of a significant boost. Punt returns were nonexistent. Kick returns, outside a nice 32-yard return, weren’t really a threat. And there weren’t any almost-blocks — in part because OU had to punt just three times all night.

What to say? Oklahoma State trailed by 21 points less than nine minutes into this game. Say what you want about players looking flat, or being out of position, but the cold hard truth is that this comes down to coaching. OSU seemingly always comes out flat and lethargic in Bedlam, and in a game that could have put OSU on course to a Big 12 title, tonight was no exception. Completely unfathomable.

More than that, OSU coached like it was the favorite, not the underdog, example being when they opted to punt while trailing by 21 points late in the fourth quarter — in OU territory. Just inexplicably conservative, tail-tucked-between-the-legs coaching that was bad from the jump and never improved.