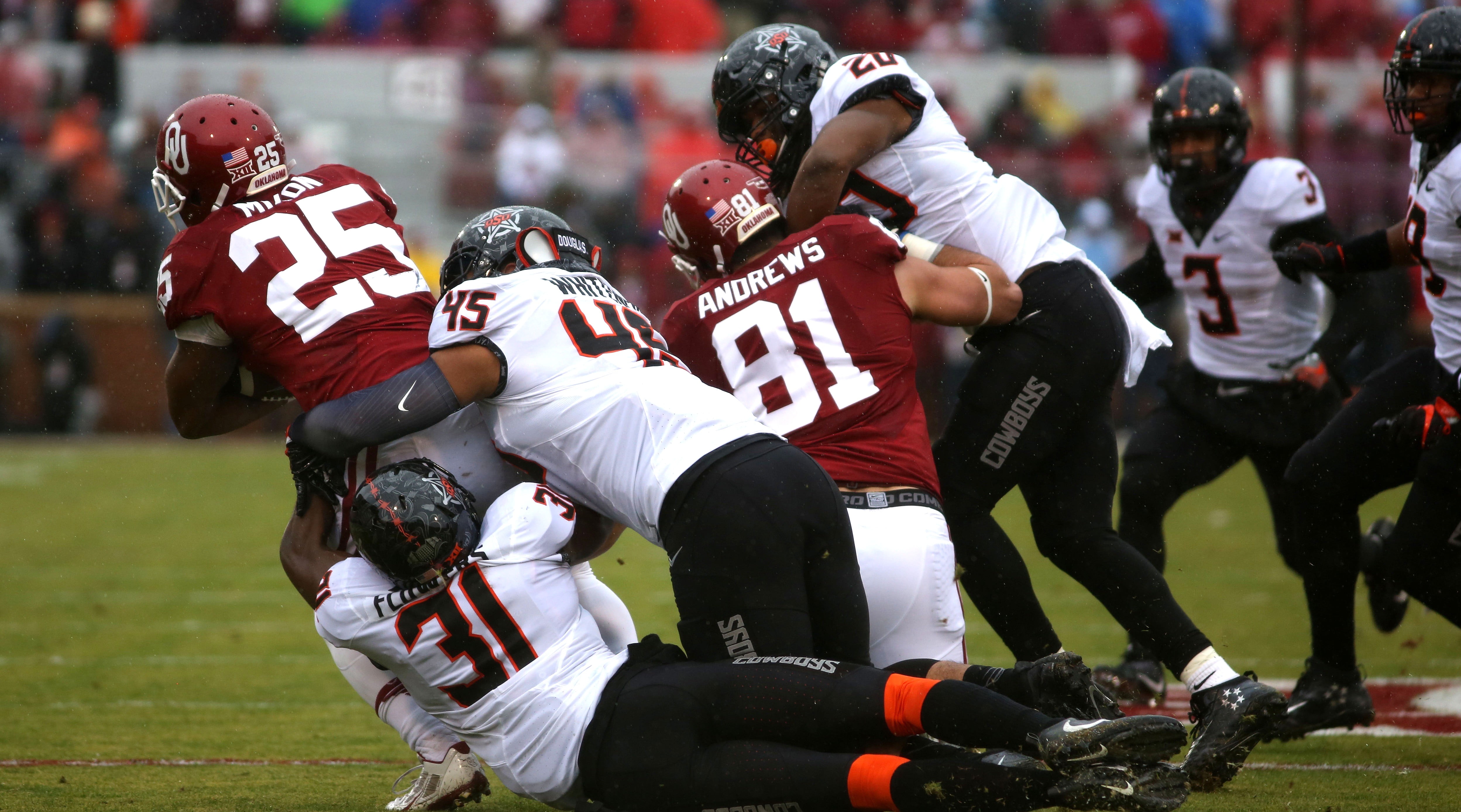 Here is a look back at a few post-Bedlam quotes on Saturday from Norman.

“He’s (Baker Mayfield) really good at buying time and slinging the ball down the field. He’s very accurate. They’ve got a couple guys that are pretty elusive in space, and truthfully that’s what it came down to.”

Mike Gundy on if Not Scoring Early Hurt OSU

“Not really. We, like I said, were up by seven with a minute and thirty to go in the half, so we had battled back and forth, established the running game and controlled the line. Then, the big plays got us. When you play on the road and allow big plays, the fans and momentum swing can really make it difficult.”

Jordan Sterns on his last game

“They made too many big plays. That’s a great football team with big playmakers. Their running backs run hard. Overall, I’m still proud of the guys We played out hearts out there… I think a lot of guys left it all out there on the field… They’ve got great players all around the field. They’re a great football team and we’ve got to do a better job making open field tackles, a lot of it was on tackling. And I just feel like we lost our edge. We didn’t have the same enthusiasm as we did in the first half.”

“At the end of the day, (Baker Mayfield) is a great player and if you mess up, he’s going to expose you. That’s one thing we’ve got to take away from this game is that we’ve got to do our job.”

Chad Whitener on the loss

“We just thought that we could focus on the run but they still have weapons out there. They recruit very well here, and that’s the reason that they won the Big 12 today. [Baker is] an incredible player – he’s just able to move well and keep his eyes downfield and whenever he needs to tuck it, he can tuck it. He really makes you have to be assignment sound.”

“Start off by, as always but really mean it, my compliments to (OSU Head) Coach (Mike) Gundy, his staff, his team—what a good football team they’ve had this year. I thought they did a great job with seven straight victories coming into this game. A really good football team. Good players, well coached, really in every part of the game. Hard-fought, good game, and with that, I’m just incredibly pleased with our players’ resiliency this season, and in particular, just going through and battling to the end in this game.

Stoops on winning in Norman

“That was a big deal to the players through the week, that we’ve never had the chance to hoist a Big 12 Championship trophy on our own field. Did we need any more motivation? I wouldn’t think so, but the players thought it was pretty cool to be able to do that here. I like all of them. I’ll take those ones back in Arrowhead, too, in two degrees. That’s pretty good too.”

Get me off this planet.

“We played a lot of straight stuff and didn’t do anything dramatically different. I thought we’ve played well in halves before, and I thought Oklahoma State is a much better team than they were a year ago.

“Just that we don’t want them to come in here and take our trophy, and that’s pretty simple. You can’t let our rival come down here and do that. I just didn’t like it. I thought they were more physical at the point of attack, out-executing us in the run game and we knew we had to stop the run to win the game.”

Did you see what he said at the beginning? We played a lot of straight stuff and didn’t do anything dramatically different. Because that’s what you can do against OSU in Bedlam.

Baker Mayfield on how he’s matured

“The old Bake would have probably try to do too much and make up for not having your best player on offense but I’ve settled in and kind of matured a lot in the past, recently here. I realize I just have to go out there and do my job and get my receivers the ball, who are here at Oklahoma to play football for a reason. They’re playmakers so just get the ball in their hands and they will do the rest.”

Samaje Perine on the end of the game knee he took

“What’s the point of scoring? We were already up by two touchdowns with only a few seconds left, so there’s really no need to run up the score. I did what I thought was the right thing to do.”