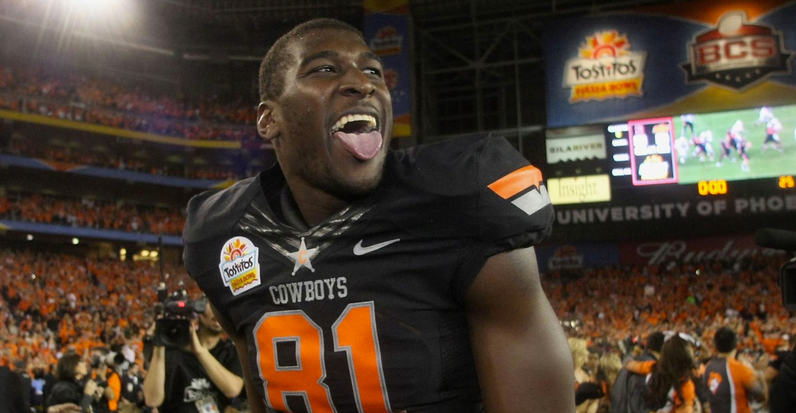 Historically, Oklahoma State has almost always relied on underrated recruits. In the Mike Gundy era, it’s been almost exclusively undervalued high school players who have been given the nod to play at OSU. And there have been some good ones come through.

Here are five of Mike Gundy’s most underrated recruits who had the most productive careers at Oklahoma State. This is not from a purely numbers standpoint, but also done subjectively based on impact on the field and how they are remembered off it.

A one-time Oklahoma Sooners commit, Peterson flipped to Oklahoma State just a week before signing day in 2012. As a top-10 prospect in the state, he still only garnered two scholarship offers: OU and OSU.

Peterson succeeded the shutdown corner spot Justin Gilbert left behind, and made his presence felt as a top lockdown player that drew the assignment of every teams opposing No. 1 wide receiver. He finished his career with 5 INT’s, 143 total tackles and a fumble recovery, and has bounced around with the Chicago Bears in the NFL after signing as a free agent this past season.

C’mon now, this guy was a three-star prospect? Coming out of Richmond, Texas, he was a very slept on prospect who only held offers from six schools: LSU, OSU, Texas A&M, Nebraska, Iowa State and Arizona State.

He ended his career at OSU with 47 consecutive starts, and was drafted No. 6 overall pick by the Seahawks in the NFL draft, and now plays for the Denver Broncos as the starting left tackle.

Coming out of John Tyler, Texas, Hunter was a well-kept secret by Oklahoma State. Outside OSU, his biggest offer was Baylor or TCU — two schools who weren’t near the programs they are now.

Hunter finished with two 1,000 yard seasons at OSU, more than 4,000 rushing yards on his career. He finished third in all-time rushing, one spot above this guy named Barry Sanders.

Out of high school, the 247sports composite rated him as a three-star. But 247sports themselves didn’t have him ranked at all. He got the “N/A” treatment.

More big men love! Taylor rightfully deserves it, too. He’s been underrated his entire career and at Oklahoma State started 47 games at the guard position. On some of the most productive rushing offenses OSU has ever produced.

He was undrafted in the NFL, yet is a key piece of the Green Bay Packers who are playing in their divisional championship in the NFL.

Simmons wasn’t exactly a hidden gem. He was an Army All-American from a Texas powerhouse, and still pretty underrated nationally. That’s just an example of how crowded the Lone Star State is with talent.

He started in every game for OSU in 2013 and 2014, and had his career end short with a knee injury. But 177 tackles, 3 sacks and 21.5 tackles for loss later, he may go down as one of the all-time inside linebackers to ever play for Mike Gundy.

As a high school athlete that played quarterback and cornerback, Gilbert found his role at Oklahoma State as one of the best lockdown corners to play at OSU. His speed allowed him to play off the ball and poach passes to go the other way, and he was one of the most explosive kick returners OSU has had in years.

His NFL career has been pretty up-and-down after being picked by the Cleveland Browns at No. 6 overall. But coming out of high school as a three-star recruit, he’s made a bunch of money in the league and made a lasting impression in Stillwater.

Awwwh yeah, time to show Choo-Choo some well-deserved love. This guy may go down as the most underrated recruit ever. Even Gundy underrated him when he had him!

It seems every year OSU had another option they went with at quarterback, and every year he seemed to be the most reliable option. Not bad for a guy who finished with his name all over the record books.

This one’s a recent one, but still one of the more miraculous stories in the Gundy era. Ogbah was a three-star recruit from Bush, Texas, and chose OSU over several other options.

Ogbah declared early for the NFL draft, and came off the board as the first pick in the second round of last years NFL draft. Already in one season, he seems to be the biggest bright spot for a struggling Browns franchise that has had difficulty finding any relative success in the past few years.

Coming from small-town Ardmore in Oklahoma, Blackmon was ranked as the nation’s 80th prospect at his position, receiving offers from OSU, Colorado, Mizzou, and Northern Iowa.

A three-star prospect, he finished with back-to-back Biletnikoff Awards as the nations best receiver, set the single season reception record at OSU and the total receiving yards in a single season record. Oh, and he was a top-5 NFL draft pick. Not bad for a three-star recruit.